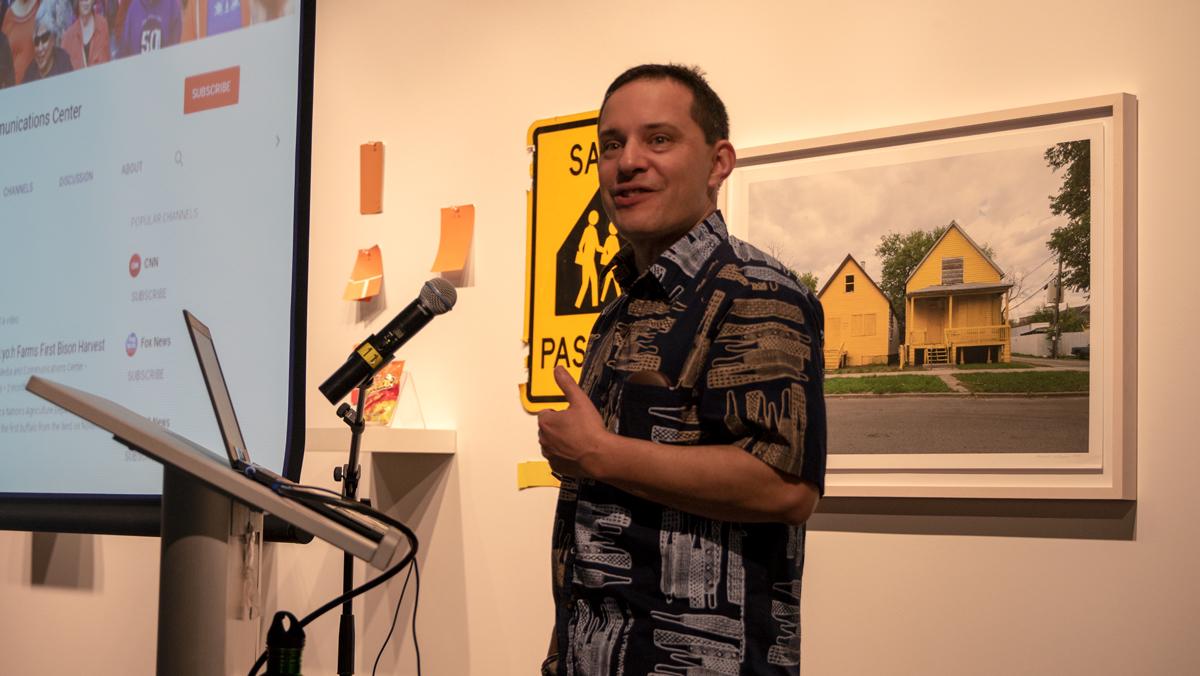 The Center for the Study of Culture, Race and Ethnicity welcomed Jason Corwin, executive director of the Seneca Media and Communications Center, to Ithaca College Feb. 21 to discuss the importance of environmental protection for the Seneca territory.

The event was focused on the power media can have when produced by indigenous people to advocate against indigenous exploitation. During the event, short clips and a longer documentary was played to give attendees examples of media being produced that sheds light on contemporary issues involving indigenous communities. Corwin also spoke about his own experience as a media creator in front of an almost full house in the Handwerker Gallery.

“The important nature of stories in our culture and in our ways of teaching makes literature and film very viable formats for not only conveying old stories but our stories of now that are as varied as our people are diverse,” Corwin said.

Corwin, a member of the Seneca Nation, began his presentation by providing background information on the the history of indigenous people, also known as “people of the great hill,” in the Finger Lakes region. The tribes in the area were strongest during the 1600s and into the 1700s. He discussed the trading relations between the indigenous people and the English and the Dutch during colonial time as well as the impact of the American Revolutionary Road.

Corwin also spoke about the displacement of indigenous people in 1974 from the area where Ithaca College is located to the Niagara Falls region, and the violation of the Treaty of Canandaigua by former President John F. Kennedy, a peace treaty that had been signed with former President George Washington. Kennedy played a direct role in violating the treaty by allowing for the Kinzua Dam to be built on Seneca territory.

After sharing some background information, Corwin played an episode from the “Hangin’ with Conservation” series — a production by the conservation department from Seneca Media and Communications Center — that highlighted the ongoing efforts of the indigenous people to preserve wildlife in the Allegheny River.

He then showed a short documentary, “Defending Ohi:yo,” a film about a proposed wastewater treatment facility in Pennsylvania that promised to clean toxic wastewater from fracking that would then be disposed into the Allegheny River. Members of the Seneca Nation of New York and other residents protested the plan at the Coudersport Area Municipal Authority public meetings because they were concerned it would contaminate the water. A final vote was held and struck down the plan to build the facility. Corwin said it was an empowering moment for the Seneca Nation.

Smokii Sumac, a PhD candidate at Trent University in Ontario, Canada, who is friends with the speaker, said he was surprised by the feeling of hopefulness that he experienced after the presentation.

“I think he did really, really well and I was hopeful,” Sumaz said. “I’m hopeful walking away from it which is surprising because you don’t think about when you’re talking environmental issues often it can be not hopeful so it was inspiring.”

Sumaz also said he hopes these presentations place an awareness of the media content that is being created by indigenous people to support indigenous populations who are battling against these critical issues.

Junior Raffaele Nicoletta said he admired how Corwin incorporated his personal knowledge into his work.

“I thought it was excellent,” he said. “It was great because he combined a lot of his work with the insight that he had about it so there was like this personality in the work … I really enjoyed that.”

Serenna McCloud, an Ithaca community member, said she was taken back by the ending of “Defending Ohi:yo.”

In addition to his work in the Seneca region, Corwin went to Standing Rock during the opposition movements against the Dakota Access Pipeline. The Dakota Acesss oil pipeline was constructed on sacred native american burial grounds and many were concerned it would contamination of local water sources of the Standing Rock Sioux tribe. He shot video and uploaded it onto social media. The issue then became more relevant when Corwin returned home and learned about Epiphany Allegheny LLC’s proposal to implement a fracked gas pipeline upstream from the Seneca Nation.

“Naturally being a documentary film-maker, I just keep whipping out the camera and keep recording,” said Corwin. “I say ‘Oh, okay this is starting to be a movie, let me start editing this together’ and I had people in the community were asking ‘We wanna see your footage from Standing Rock,’ and I was like ‘I need to start editing and get this together.’”

Corwin’s upcoming feature-length documentary, “Denying Access: NoDAPL to NoDAPL,”will look into the fossil fuel industry and the protests against the Dakota Access and North Access Pipelines. It will screen 2 p.m. March 9 at Cinemapolis in the Ithaca Commons.

Corwin emphasized the need to utilize his skills to communicate the stories of the indigenous people within the community and to the outside world as well. He also hopes that people can realize the impact they can make in society while taking into consideration the rights of indigenous people.

“I hope people will be just inspired to see that everyday people have power to affect change in the world for the good and that people see that the environment and indigenous rights issues are [of] paramount importance,” he said. “But I hope other people that maybe were not aware of just how deep and how much history and what’s going on.”