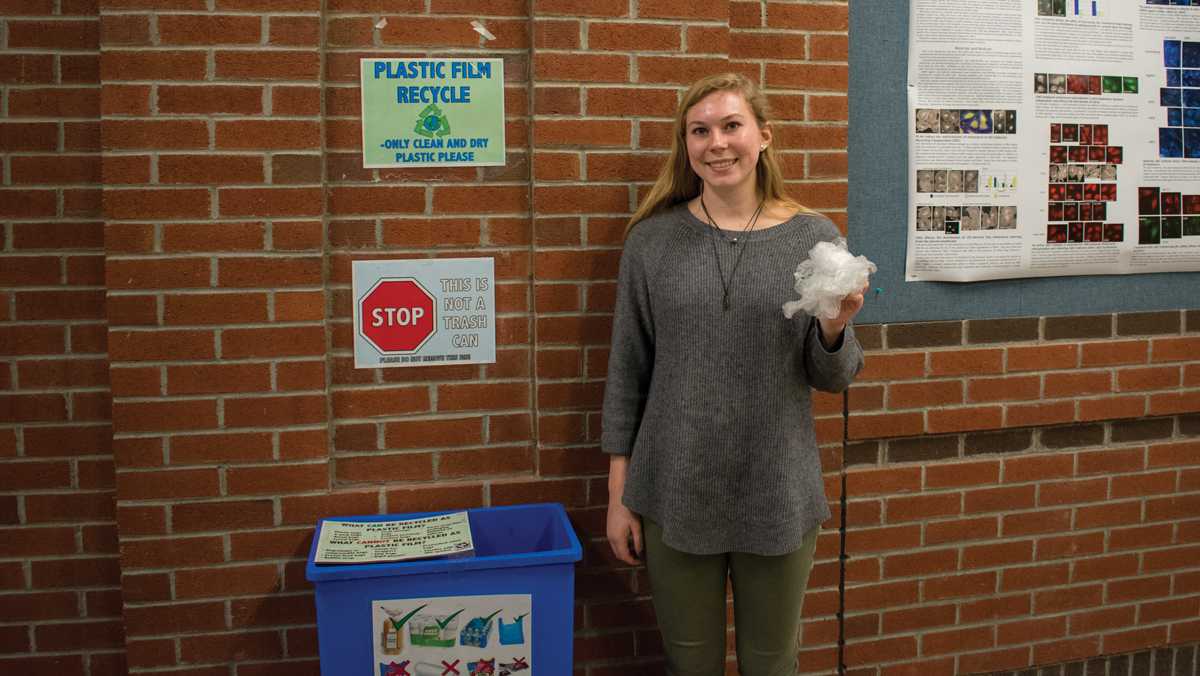 A student and professor from Ithaca College are conducting an experiment to see how much plastic film is recycled in the Center for Natural Sciences when specific receptacles are provided.

The project is an offshoot of senior Brianna Matthews’ senior research project for her environmental science major with Susan Allen-Gil, professor in the Department of Environmental Studies and Sciences. Matthews and Allen-Gil came up with the idea for the project when trying to determine ways to reduce the amount of plastic on campus entering the general waste stream, Allen-Gil said.

Plastic film products include saran wrap, produce bags from grocery stores, six–pack rings, ziplock bags and air pillows from packaging. In Ithaca, plastic film cannot be put on the curbside with other recycling, because it cannot be processed by the machines that sort single–stream recycling, Allen-Gil said.

The experiment began during the week of Feb. 12 when Matthews and Allen-Gil set up two receptacles for plastic film in CNS with signage explaining what could be deposited. One is in the basement of CNS, and the other is on the second floor in the hallway where the Department of Environmental Studies and Sciences is located. The bins will be available for plastic film recycling for the rest of the semester.

One of the largest obstacles encountered so far is non-plastic film waste, such as trash or other recycling, being put in the receptacles, Matthews said. In order to address this complication, Matthews and Allen-Gil ordered two additional bins that look distinctively different in both color and shape from most waste containers.

Matthews has also found that not all of the plastic film disposed of in their receptacles has been cleaned completely, which is a necessary part of the process and is specified on the signs on the bins.

Despite the information displayed on the bins themselves, not all students are fully aware of what the recycling entails. Sophomore Sophie Cameron said she was aware of the project but wasn’t sure that her peers in the biology department knew about the recycling opportunity.

“I’ve heard about it through the grapevine,” Cameron said. “But toward biology majors, not very many people know about it.”

Emails explaining the project were sent to department heads within CNS, which may have aided in increasing awareness of the project. Allen-Gil said that success for any increased plastic film recycling initiatives on campus will rely heavily on education and outreach over an extended period of time.

This experiment will serve as a pilot for future attempts to introduce plastic film recycling to other areas on campus. After Matthews graduates, Allen-Gil will continue to work on the project with other interested students.

Matthews said the current location of the receptacles could potentially influence the results of the experiment because they are in CNS and not other places on campus. She said she noticed a difference between what has been put into the bin located near the Department of Environmental Studies and Sciences and the basement of CNS.

“The one downstairs I found had a lot of trash or recycling,” Matthews said. “So most of that plastic recycling has been from, I think, the ENVS people, because that’s where we’re located. And downstairs, it’s been a little different. So I don’t know, but it’d be interesting to see the differences between the different buildings.”

Campus Sustainability Coordinator Rebecca Evans said it is not likely that the implementation of plastic film recycling in other areas of campus would occur in the near future. This is because other aspects of recycling on campus must be amended first, such as increasing the overall rate of recycling and student understanding of what can be recycled, Evans said.

Recycling makes up 20 percent of the college’s waste stream, not including items that are composted, whereas the national household average is 35 percent, Evans said.

Greg Lischke, director of energy management and sustainability, said he has seen nonrecyclable items in recycling bins throughout campus, including printer ink.

“I think it’s important that our students should be able to figure this out,” Lischke said. “I do believe our signage is confusing.”

“So the educational element of it may well exceed what happens here on campus,” Allen-Gil said. “It may not just be a measure of how much we generate on campus, but how much we educate people about the fact that plastic film is recyclable, and how it’s recyclable.”