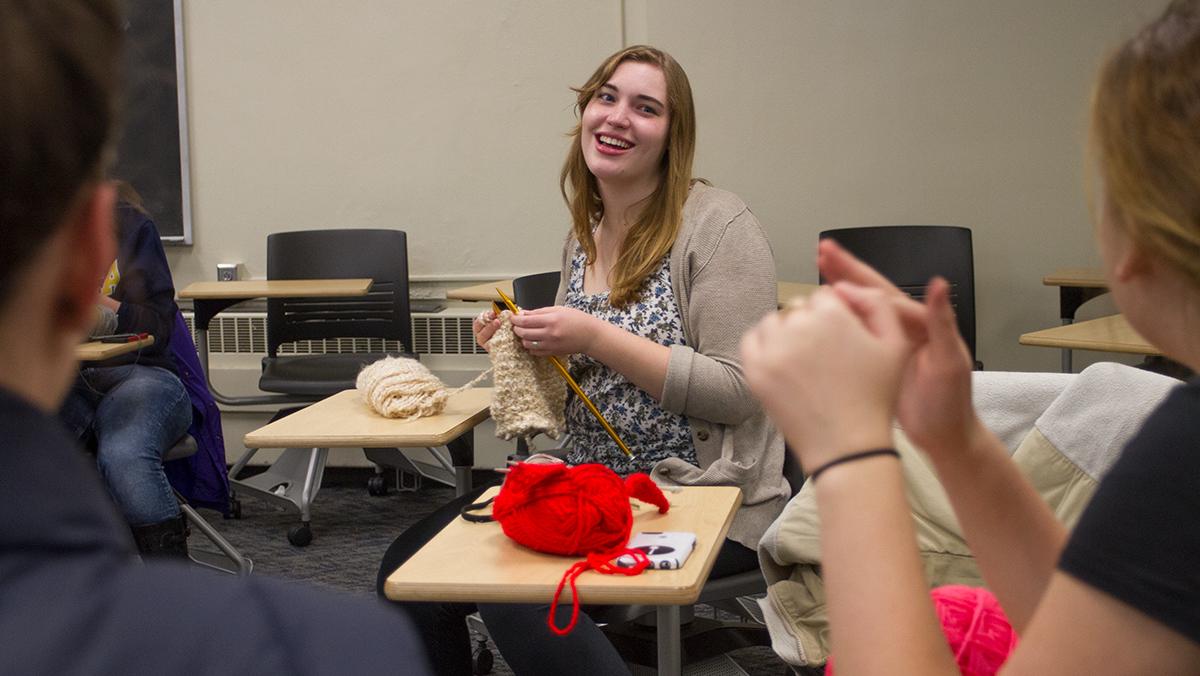 Fernando Ferraz/The Ithacan
Senior Sabina Leybold is very active in the Ithaca College community as a volunteer. Above, she is pictured knitting garments to send to hospital patients through IC Project Sunshine.
By Steph Siok — Staff Writer
Published: November 15, 2016

She is delivering it in the form of hand-knitted garments to sick hospital patients. Leybold is a veteran member and president of Ithaca College’s chapter of the nonprofit organization Project Sunshine, a group dedicated to providing educational, recreational and social resources to people with medical challenges. Ithaca’s chapter focuses on hand-knitting garments for hospital patients.

For Leybold, volunteering is not something she does just to fulfill a need for the Leadership Scholar program, but rather, it is something she values in her life. She said she has volunteered since a young age and was involved in many volunteer programs in high school.

“I definitely wanted to find a service opportunity when I came to college, but I didn’t exactly know what I wanted to do,” Leybold said.

Leybold said she first became interested in learning how to knit in high school. She took her interest to the Organization Fair her freshman year at the college and learned about IC Project Sunshine, a group that would teach her how to pursue her interest in both volunteering and knitting. She said learning how to knit was a struggle, but now she is teaching new members.

Leybold said volunteering on a regular basis is extremely important for students if they want to make a difference in their communities. She volunteers about three times a week through the club.

“It’s easy to think of service as one-time opportunities, but doing it throughout your week is really beneficial and the best way to create a large impact,” she said.

The club offers a venue for students of all majors, interests, and skill levels to de-stress while helping a good cause, she said. The commonality  with everyone is the desire to help others, she said.

During Leybold’s first three years in the club, she said they did not know where their knitting projects were going — they just knew that the national distributor was sending them to hospitals in need. This year, the club has a new contact for their chapter who updates them on which hospitals their items are being sent to.

In particular, she said she remembers a time when the club was informed its items went to a hospital in Tallahassee, Florida.

“That was a really special moment to be like, ‘Wow, I know where it’s going this time, that it can go all sorts of places,’” she said. “Making a difference on a weekly basis is a big deal for me, and also getting people involved in that as well.”

And according to her fellow club members, her hard work and leadership does not go unnoticed. Senior Olivia Smialek said she has worked with Leybold in IC Project Sunshine since they were both freshmen.

“She tries to make our meetings fun every week,” said Smialek, the social media coordinator of Project Sunshine. “She started our tradition of listening to the ‘It’s Raining Men’ Pandora station.”

She said Leybold is always trying to get to know the members better and tries to make sure they are learning more about knitting and working together for the project each meeting.

“She wants to plan an event outside of normal meetings to encourage members to get to know each other and bond a bit,” Smialek said. “I think that’s super important to bring the club closer together.”

The club’s faculty adviser, Julie Dorsey, associate professor in the Department of Occupational Therapy, said she has known Leybold for about three years and has watched her grow in her position of leadership.

“She has a commitment to serving others,” Dorsey said. “Project Sunshine is about supporting families as they deal with the difficulties of medical issues. Sabina has a clear passion and drive for spreading hope and positivity.”

Leybold is involved in many other groups on campus. She is the treasurer of the spoken word poetry group, Spit That!, and she is a part of the Leadership Scholar Program as a student leadership consultant. She is a peer career advisor at Career Services and a student writer and editor at the Office of Strategic Marketing and Communications. She is also a social media intern for Project Look Sharp, a group that aims to integrate media literacy into the core curriculum of K-12 classrooms.

Despite Leybold graduating soon, Dorsey said she has no concerns about the club’s being in good hands after she leaves.

“We will miss her when she graduates,” Dorsey said. “I have no doubt that Sabina will continue to make a difference in the lives of others after she graduates.”