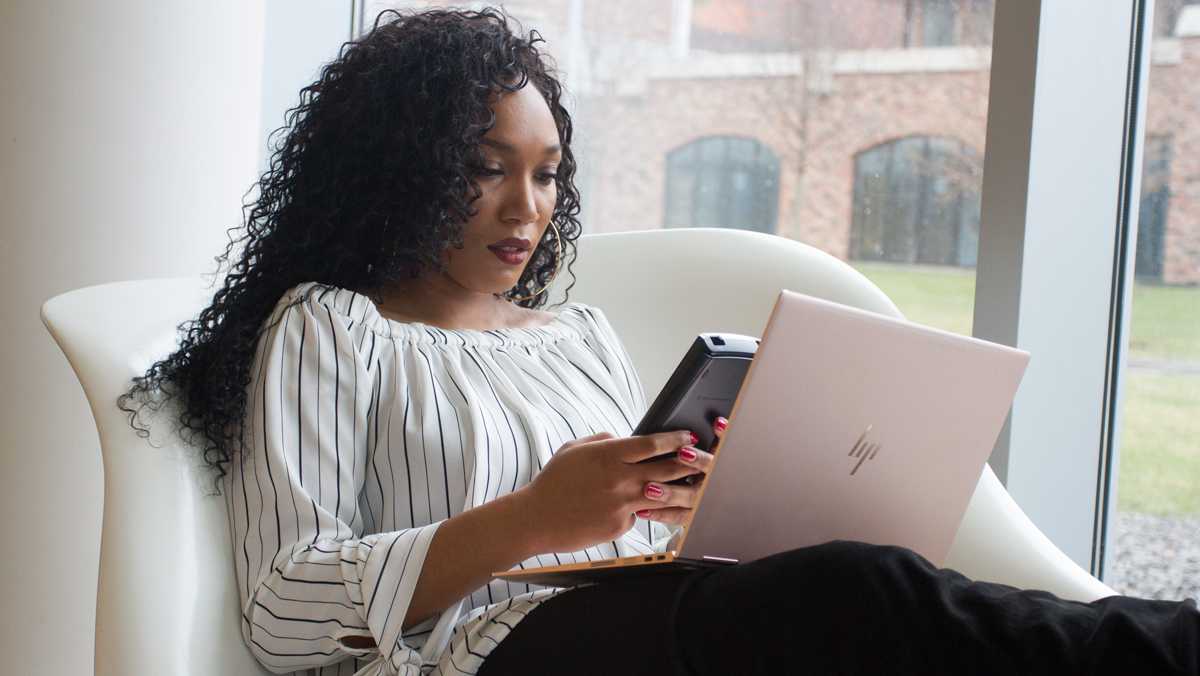 Elias Olsen/The Ithacan
Senior Chanel Underwood is a business administration major with a concentration in finance and a minor in economics. She is in four honors societies and is a Martin Luther King Scholar.
By Meredith Burke — Staff Writer
Published: April 18, 2018

Senior Chanel Underwood was accepted into the Ithaca College Class of 2018 and the Martin Luther King Scholar Program in 2014. Upon receiving her acceptance, she said, she and her mother were ecstatic.

Although Underwood had multiple college acceptances, she said, the opportunities offered by the program provided more than she had even hoped to do in college, including scholastic traveling to the United Kingdom, Cuba and Ecuador.

“I felt surreal,” Underwood said. “I had options for college, but this one seemed to be everything I ever dreamed of.”

Underwood is a business administration major with a concentration in finance and a minor in economics. Sean Reid, dean of the School of Business, said Underwood had outstanding academic credentials and involvement as a student leader.

She has earned a spot on the Dean’s List for six semesters and is involved in several honor societies and extracurricular organizations. She has also volunteered for four years with Project Generations, an organization that pairs students with the local elderly in retirement homes, and is a member of the club volleyball team.

She is currently the president of the Ithaca College Student Chapter of the National Association of Black Accountants. Underwood said through the organization, she has gained skills that will advance her career after graduation.

“I was very grateful for the opportunity to learn to lead in diverse settings,” Underwood said. “I got to meet a lot of people too, joining these programs, and I felt like I made a difference in the community.”

Underwood said one of the most rewarding moments was getting funding for members of NABA to attend the Eastern Region Student Conference in Norfolk, Virginia, during the Fall 2017 semester. After she spoke to the dean of the School of Business, the club received $10,000 to attend the conference.

All of the 20 NABA attendees networked at the conference. Half received interviews for internships or jobs, she said.

Junior Seondre Carolina, vice president of programming for NABA, said he admires Underwood’s leadership. He said she is committed and good at bringing out the strengths of others.

Underwood is involved in multiple honor societies including Phi Kappa Phi Honor Society. She was inducted in Spring 2017 for being in the top 7.5 percent of her class. Reid said he also recommended Underwood to be a Phi Kappa Phi Presidential Scholar, an award only given to five students on campus. She is involved in three other honor societies: Oracle Honor Society, Beta Gamma Sigma and Omicron Delta Epsilon Economics Society.

Underwood said another experience that was really rewarding was presenting and winning an award for her research project at the James J. Whalen Academic Symposium in 2017. Her project was titled “The Wealth Gap: The Social Injustice of Internal Colonialism.” The research focused on the racial discrimination within the housing market by comparing research from the markets in other countries to those in the United States.

Reid, who attended her presentation at the Whalen Symposium, said he was incredibly impressed by her talent and social consciousness.

“To be able to take that expertise and then apply it to a real-world problem and create awareness for social injustice was, I thought, really cool,” Reid said.

Underwood said she learned a lot about the manifestations of colonialism in Introduction African Diaspora Studies — taught by Sean Eversley Bradwell, director of programs and outreach for Student Affairs and Campus Life and her mentor — which she took during the Spring 2016 semester.

Moustafa Abu El Fadl, assistant professor for the Department of Finance and International Business, said Underwood was an eager and inquisitive student who quickly developed skills in finance. He taught her Financial Markets and Institutions and Business Finance classes during the Spring 2017 semester.

Fadl also said that when Underwood went to him for professional career advice for after graduation, she was humble about accepting potential job opportunities.

“She was interested in earning her position, not being given the position,” Fadl said.

After graduation, Underwood will be working in the financial services organization advisory department of Ernst & Young, an international financial services firm, in their office in Tysons Corner, Virginia. She will be starting her position in October.

“It’s like a dream job and I’m getting it right out of college,” Underwood said. “I definitely think Ithaca prepared me for that.”

Senior Christian Conyers, member of NABA and close friend of Underwood, said Underwood is not only a good friend but also inspires those around her — including him — to do better.

“I would say, honestly, she’s like a sister to me,” Conyers said. “I come to her for advice, she motivates me to do better in school. She’s honestly one of the smartest people I know.”

Senior Veronica Angeles, another member of NABA and close friend of Underwood, said Underwood is an incredibly giving person and is always willing to help others who need assistance.

Underwood said she hopes to be an inspiration to other students at the college, especially students of color.

“I hope I can inspire others that hard work does pay off,” Underwood said. “It’s not always easy, especially being a person of color, but with the help of your community you’ll be successful.”

Senior wins business pitch for product to help the elderly