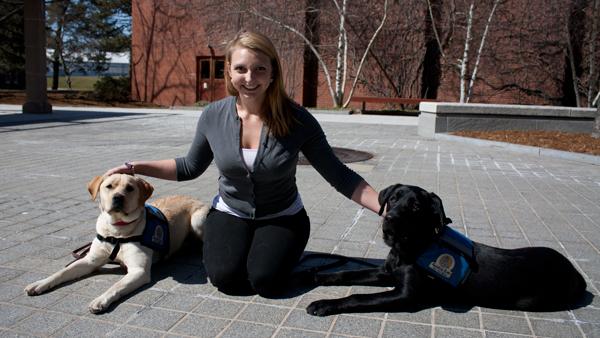 Kelsey O'Connor/The Ithacan
Senior Grace Goodhew snuggles with one of the guide dogs in training that is part of the Guiding Eyes for the Blind program at Ithaca College. Goodhew also practices yoga regularly and teaches courses in it downtown.
By Kelsey Fowler — Senior Writer
Published: April 18, 2013

Puppies selected for the Guiding Eyes for the Blind program are, in part, chosen for their confidence, something senior Grace Goodhew, an aging studies major with a focus in management and administration, knows a thing or two about.

“She’s the kind of person where she goes into a room and she’s there 30 minutes and everybody in the room is her friend,” Bergman said. “If she is ever stressed out, you don’t know it — she always has a smile on her face.”

Goodhew’s purple yoga mat, rolled up and slung over the shoulder of her light leopard-print coat, bounces with her as she walks. She constantly carries multiple bags filled with books, outfit changes for yoga class and supplies for puppy training.

She is quick to pull up iPhone pictures of Josette, the black lab she previously raised. Goodhew decided to raise a puppy after seeing a Guiding Eyes dog on campus her junior year. Guiding Eyes is an organization that fosters puppies and trains them to assist the visually impaired.

Josette is now being considered for the breeding program, the top 2 percent of all GEB graduates. Giving up her dog after more than a year was difficult.

“She is the sweetest pup ever, and I still miss her tons,” she said.

With updates from her new foster family, Goodhew is excited to see Josette go on to make more little puppies now.

This year, with Goodhew’s help, there were 10 puppies being raised on campus. It’s a 24/7 commitment, and Goodhew knows firsthand how much work it takes.

The GEB has a 21-year history at the college. Students raise the dogs from eight weeks to about 14 months, strictly training and socializing them before the dogs begin training to work for the blind.  Goodhew said campus is an ideal place to raise a dog, because there are so many different areas and people for the dogs to get accustomed to, and a Guiding Eyes dog must be comfortable and calm in any situation.

Goodhew made GEB an official college club in Fall 2011, which is what she attributes its growth to this year. She wanted to add more structure to the process, instead of just entrusting someone with a dog worth $50,000.

“Now we’re really able to outline what the process is, with meetings and rules,” she said. “Instead of just having it be vague, handing you a puppy and saying, ‘Go for it.’”

Junior Katie Sheena, vice president of GEB, said without Goodhew in charge, GEB wouldn’t be nearly as successful as it is now.

“With all of the things she’s put in place, she’s helped bring more awareness,” Sheena said.

Goodhew’s mother, Lee Goodhew Romm, is a professor of music performance at the college and the faculty adviser for the college’s GEB chapter. She is confident her daughter is ready to meet the “challenges and joys” of what’s to come.

“Her leadership skills have been refined and grown in huge ways,” she said. “Grace is inspiring, and I am so proud of her decisions.”

Goodhew also practices Kripalu yoga, which literally translated means “compassion.” She was 6 years old when her mother first introduced her to yoga, and she became certified last summer. Goodhew teaches five to six classes every week now, some on campus and some at Sunrise Yoga. The practice emphasizes stillness and relaxation, using standard yoga poses with a focus on meditation and breathing.

When raising Josette, Goodhew would practice her own yoga with the dog by her side, snuggling on her mat. She wanted to take a year off after graduation and teach yoga on an around-the-world cruise ship, but when those plans fell through, Goodhew decided to apply to graduate schools in hopes of becoming a nursing home administrator.

“I’ll be able to do amazing things with my degree, but that’s only a portion of who I am and where I spend my energy,” she said.

From the students who attend her yoga classes to those she now mentors as they raise their own puppies, Goodhew has made a niche for herself on campus.

“She has an uncanny ability to see the way things are connected,” Bergman said. “So even though something’s not officially part of her major, like Guiding Eyes for the Blind for example, she sees overlaps and intersections and how that could relate.”

Goodhew’s list of possible graduate schools spans the coasts, all with three requirements: someplace warm, sunny and near water. Josette, of course, is invited to the graduation party.

“I don’t have a bucket list, because as soon as I have the will to do something, I find a way to make it happen,” Goodhew said. “Many times, this involves sacrifice in some way, but you learn to prioritize. Ninety-nine percent of the time, you can make things happen for yourself.”