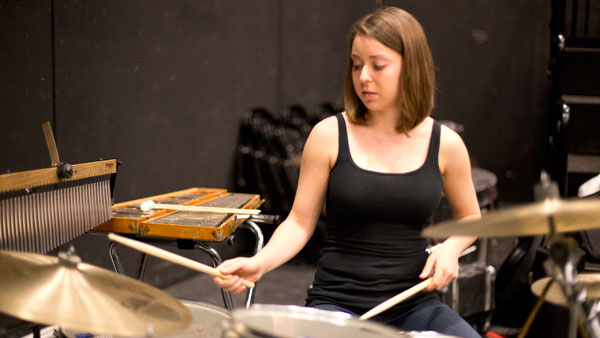 Preparation for the next evening’s performance was relaxed. Sitting at her drum set and conversing with the pianist over which song to practice, senior Jessie Linden smiled humbly at the prospect of demonstrating her drum skillset.

As she began to play, Linden eased into the music as though slowly turning a volume knob to produce her sound.

Members of the audience for “I Love You Because,” the musical and senior project of Linden’s friend, senior Michael Liepper, got to observe her percussion skills during the show’s premiere April 19 in the Clark Theatre of Dillingham Center.

Linden, a senior music theory and performance major, specializes in percussion, but her niche lies where the music and theater industries intersect. From singing to playing in the pit orchestra, Linden has been heavily involved in theater since high school and aspires to continue playing percussion for live theater productions.

“One of my interests in playing percussion is actually to contribute to the theater industry, so I’ve wanted to keep my connection to theater alive,” she said.

Conrad Alexander, music performance lecturer at Ithaca College, said this combination of musical theater and percussion interests is unusual. Most students come to the college with drumming experience, he said, but Linden also brought experiences with show choir to the forefront.

“It was just different than most of the kids who come here,” he said. “So she was a vocalist and a percussionist, and I think for the first half a year here, she tried to find her way with that.”

Linden did so by declaring her primary instrument in percussion for her performance degree.

She has had the opportunity to take monthly private lessons with Valerie Naranjo ’82, the percussionist for NBC’s Saturday Night Live Band who pioneered West African keyboard drumming in the U.S. The two met in 2011 at the Leigh Stevens Summer Marimba Seminar in Ocean Grove, N.J. Listening to Naranjo play on the gyil, a marimba instrument of the Lobi-Brifo nation of Ghana, inspired Linden to learn some of the compositions that have been transposed for the marimba and to begin learning the gyil.

“I’m still taking the baby steps to learn how to navigate the instrument,” she said.

Naranjo said the gyil, in particular, is especially difficult to master as it requires a high degree of multitasking and improvising, but Linden was well-equipped for the challenge.

“Jessie has the kind of dedication that is needed for such an endeavor,” Naranjo said.

Linden said her repertoire with Naranjo — including songs utilizing hand drumming, the gyil and marimba vibraphone — served as the inspiration for her solo senior recital, which she performed Feb. 16 after returning to Ithaca. She said she is most proud of her accomplishments in this recital, which was the culmination of her hardest work, including music that represents the culture of the people of Ghana.

“In solo performances, I’m just thinking about creating phrases that are meaningful to me that I think are expressing what the character of the music means,” Linden said.

Senior music education major Alyssa A’Hearn, a close friend of Linden, said Linden is more than just a talented performer; she is exceptionally good with people. Though many musical performers struggle with public speaking at their recitals, A’Hearn said, Linden spoke to her audience with poise.

“She’s just like one of those people who’s just got it all together,” A’Hearn said.

For Linden, this manifests itself in the balance of a demanding performance repertoire and constantly being a mentor in her role as a resident assistant. She began working in the fall of her sophomore year as an RA for first-year students and currently works with upperclassmen in Terrace 4, she said.

Linden is currently a member of the symphony orchestra, percussion ensemble and marimba ragtime band at the college. Outside rehearsal, which is five hours a week for the orchestra alone, Linden said she practices her percussion instruments every day for one to five hours, prioritizing practicing music for upcoming performances.

“It’s hard for me to get to everything I would ideally want to practice, so usually it’s about working on skills that are the most pertinent,” she said.

Even if she is playing for a show to which she doesn’t feel a personal connection, Linden said, the goal is beyond herself or any personal gain.

“I try and share what I do, but not because I’m trying to impress anyone with what or how I can play, but rather because music is important to me, and I enjoy sharing it in hopes that it touches someone else as well,” she said.