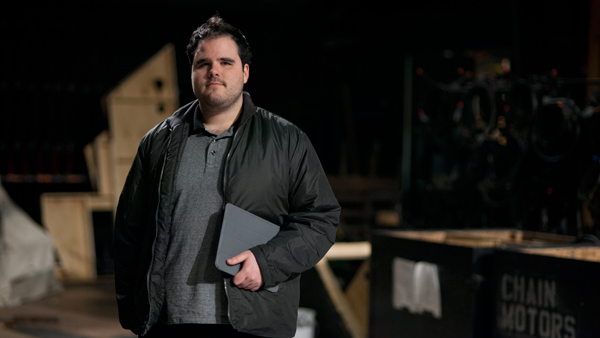 Rachel Orlow/The Ithacan
Senior Emilio Martinez Zurita de la Garza stands in front of the set of "An Enemy of the People" in Dillingham Center. Zurita is in charge of the set design for the Main Stage Theater play that will open in May.
By Sabrina Knight — Assistant News Editor
Published: April 10, 2013

In Emilio Martinez Zurita de la Garza’s junior year of high school, he went to see many plays in his hometown of Mexico City. The set design and lighting of one in particular, “Nebbia,” fascinated him and inspired him to pursue a career in scenic design.

Though Zurita had set his sights on that career path, Mexico had little to offer. When he Googled “colleges for scenic design in Mexico,” the only thing he found was the name of Sergio Villegas ’01, an Ithaca alumnus who lives in Mexico. After sending him an email, Zurita found that Villegas had studied scenic design at Ithaca College and encouraged him to make the move to the U.S. to do the same.

As an international and full-time student, leadership scholar and honors student, senior Zurita spreads himself around campus to make the most of his time spent at the college.

“That transition to become a student here surrounded by American students has been difficult, but at the same time really rewarding,” Zurita said. “It has made me think about my identity as an international student and about the role I have at Ithaca College.”

In the fall, as part of his senior capstone project, Zurita designed lighting for “Man From Nebraska.”

“For me, ‘Man From Nebraska’ was really special, because it was the first show in which something that I conceived conceptually was realized on stage, and I was very happy with the product,” Zurita said.

Tom Burch, assistant professor of scenic design in the theater arts department, who is also Zurita’s theater capstone adviser, said he loves working with Zurita because of his love for theater.

“What I love about Emilio is he has such a great energy and a great love for theater as a storytelling medium,” Burch said.

In the spring, Zurita designed the set of “An Enemy of the People,” which will open at the Hoerner Theatre on April 25.

For “An Enemy of the People,” Bob Moss, founder of Playwrights Horizons in New York City, came to the college to direct the play. Zurita said he worked closely with Moss to design the set according to the director’s vision.

Burch said Moss pushed Zurita to do something different with the design of the spring play.

“He had to consider a world to create, a world that can physically change over the course of time so it can allow us to move to different locations,” Burch said. “He has come up with some really interesting ideas about how to move the story forward and still use the same general visual style to support that.”

After graduation, Zurita said, he wants to pursue an internship in New York City for a year before he goes back to Mexico, where he plans to work in theater.

Outside of the theater department, Zurita has also directed “I Don’t Have to Show You No Stinking Badges” during his sophomore year as a part IC Teatro, a theater group that performs plays focused on Latino issues. Zurita said the experience taught him about managing a play, which encouraged him to pursue more within the theater department.

Management also carries through to other parts of his life. As a part of his leadership scholar senior capstone, Zurita is the campaign coordinator for a fundraising initiative called La Movida. The campaign raises money for service learning, performances, workshops and a scholarship for students involved in the play.

Diana Dimitrova, director of international student services and programs, has worked with Zurita since he first came to the college. Over those four years, she said she has seen Zurita grow as a leader because of his involvement.

“Emilio is on that quiet level of leadership, where every step he takes, he takes it by himself, but he also brings everyone else along with him,” Dimitrova said.

“He’s what I call a happy warrior,” Sullivan said. “He’s curious about everything. He’s got a great attitude towards learning. He’s funny and just a great guy.”

Zurita said the skills he learned at the college will set him apart when he returns to Mexico.

“Having the skill and professionalism that are expected from me at Ithaca College will really help me stand out in Mexico, and from a really young age, compared to other student designers,” Zurita said.