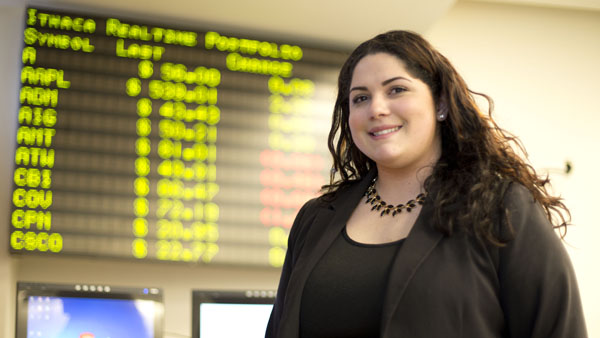 Sabrina Knight/The Ithacan
Senior Jackie Branco is president of Beta Alpha Psi, an international honor organization for finance students and professionals. Branco will attend the University of Virginia for her master's in business administration in the fall.
By Sabrina Knight — News Editor
Published: April 9, 2014

As a prospective student, senior Jackie Branco planned on playing softball at Ithaca College. When she decided to come to the college for her undergraduate experience, Branco never would have expected that her focus would shift from softball to academic involvement.

Before getting out of the car in the visitors’ parking lot during her first visit to campus, Branco said her gut told her the college was the place she wanted to be for her next four years. After a campus tour, meeting with the softball coach and having a tour of the School of Business and an interview with Hormoz Movassaghi, professor of finance and international business, Branco said she didn’t want to waste her time applying to any other colleges.

Branco began at the college as a business administration major and during her sophomore year pursued a concentration in finance. Subsequently, Branco became involved in several different organizations and departments within the business school. Currently, she is the director of communications for a financial portfolio, promotes the investment track to underclassmen who may be considering it as a track to pursue, the director of communications for the college’s hedge fund, a senior analyst for the investment club and a member of the executive board for the School of Business Dean’s Host committee. She said she spends at least eight hours a day in the business school.

When she attended a networking trip during the fall of her junior year, Branco said, she met two alumnae of the college who work for PricewaterhouseCoopers, a multinational accounting firm. Branco said she returned from the trip and immediately took on accounting as a second major.

“[PricewaterhouseCoopers] provides a lot of training and growth opportunities for young professionals, and that was something that was really important to me,” Branco said. “I’m really not looking for a job, I’m looking for a career … PWC just seemed like the best fit for me. I fell in love with the culture and all the opportunities it had to offer.”

Branco has taken classes with Movassaghi and has also travelled with him, and seven other students, to Beijing and Shanghai, China, during a summer study abroad trip. He said her chemistry and bonding with other students made the trip educational for everyone.

“Spending 14 days together gives you a lot of time to observe a student, and I found Jackie as one of the glues of the group,” he said.

Movassaghi said one of Branco’s biggest leadership roles at the college is her position as president of the college’s chapter of Beta Alpha Psi, an honors organization for finance students and professionals. Patricia Libby, associate professor of accounting and advisor to Beta Alpha Psi, said she first met Branco after she was elected to the position.

Libby said when positions for the board of Beta Alpha Psi opened for the 2013–14 year, everyone in the organization wanted Branco to be president because of her professionalism, organization and motivating attitude.

Since her election, Libby said Branco has taken Beta Alpha Psi to a new level of success. For example, each year, the chapter is required to complete a certain number of hours of community service. With Branco’s direction, the chapter completed its goal of 24 hours for the year before the fall semester was over. Additionally, Libby said Branco’s enthusiasm has taken her to present at national conferences about how the college’s chapter stays connected with alumni and the networking opportunities the college offers, as well as plan the annual New York City networking trip.

“Jackie’s goal is to take us to a higher level, and by far she has,” Libby said. “It sets a higher bar every year, and she’s been an instrumental part in this year’s great successes.”

As the vice president of programming, senior Samantha Giraud said she has gotten to know Branco closely in their positions on the Beta Alpha Psi board. She said the most impressive aspect of Branco’s talents is how she is able to be involved in so many different groups and still be able to excel in each of them.

“That is why she is so marketable; she makes jumping from her role as a student to a teacher’s assistant to the Beta Alpha Psi president look effortless,” Giraud said. “She gives so much time and energy to the School of Business.”

After graduation, Branco said, she will be pursuing her master’s in business administration at the University of Virginia. Giraud said she has high hopes for Branco in her future career.

“The sky is the limit for her,” Giraud said. “She is not going to settle for anything less than the best.”