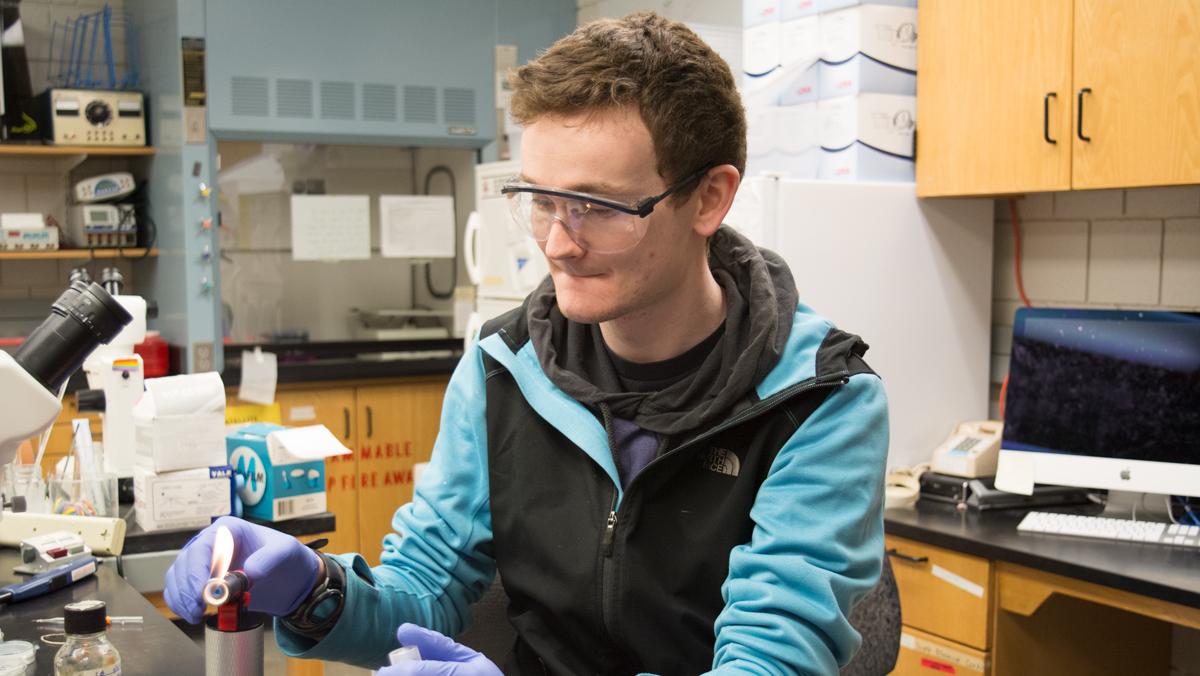 Despite growing up under difficult circumstances, senior Dallas Fonseca has been able to be one of the most successful students in Ithaca College’s School of Humanities and Sciences.

Fonseca, a mathematics and biochemistry double major, has won multiple awards for his research in molecular biology and genetics and has participated in many internship opportunities. He was also recognized nationally for receiving the Barry Goldwater Scholarship, which is a grant to do research in his field, in 2017.

Fonseca said that he was raised by a single mother after his father left when he was around five years old. After falling down two flights of stairs, his mother was left legally disabled. Despite this, she still held a job while attending school to put dinner on the table.

“All the time while doing this, she was in tremendous pain, and the physical labor didn’t at all help,” Fonseca said. “Despite this, she never stopped working so that I could have food on the table.”

During this hardship, he said, his family lost its house when Fonseca was in high school. His father had been paying the mortgage to the house in lieu of child support, so when he stopped paying the mortgage, Fonseca and his mother became legally homeless.

“My mom has been through a lot, so I commend her for pushing me during much of these hard times,” Fonseca said.

He said that he stayed with family and friends during his period of homelessness. However, he said that he was constantly in a state of shuffling that was draining. He said that everyday he was unsure of where he would be staying for the night.

“Honestly, albeit much of these hardships, my mom was extremely inspiring to me and taught me a lot about persevering through extremely difficult times,” Fonseca said.

Despite facing many hardships, Fonseca is still able to embody a high-energy and positive personality that is recognized by his mentors and peers. In the Science and Technology Entry Program for Leaders Conference in April 2017, he was called up in front of a crowd for inadvertently breaking one of the rules in the opening presentation role call. But, by the time the conference ended, he won an award for his work, and everyone knew his name.

He said the award was for his research titled “Sperm or Oocyte? The role of specificity in the emergence of post-transcriptional regulons in germline development.

Tiffany Valentin, Collegiate Science and Technology Entry Program project coordinator and Fonseca’s CSTEP adviser, said that the energy he inspired in the crowd that weekend was admirable. CSTEP is a program that provides professional development opportunities and support services to historically marginalized citizens of New York as they pursue a career in the STEM fields

He started working with Te-Wen Lo, assistant professor in Department of Biology, on her research in genetics and roundworms in Spring 2014. He began studying Caenorhabditis elegans, tiny roundworms or C. elegans, in his Principles of Biology class.

Fonseca said he was interested in working in this field because environmental disasters were very common near where he grew up near Onondaga Lake in Syracuse, New York. Onondaga Lake has been considered one of the most polluted fresh water lakes in the country. He said he wants to work with genetics to remedy this. Understanding the biology of roundworms would help further explore and understand the natural environment of Onondaga Lake.

The next semester, Fonseca began working in Lo’s genetics lab. Lo said most students do not begin working in her lab until their junior year after taking her genetics class, but Fonseca had started in his sophomore year.

“I’ve had the pleasure of watching him come into his own and mature as a scientist,” Lo said.

In 2017, he was awarded the Barry Goldwater Scholarship. The scholarship is granted annually to college sophomores and juniors who intend to pursue research careers in the natural sciences, mathematics and engineering. He received $7,500, which he said he is using to help pay for college.

“I’ve been very fortunate to have some big–named things happen,” Fonseca said. “I still find it kind of surreal.”

He said he also received a National Science Foundation Graduate Research Fellowship Program to pursue a research-based master’s degree starting in Fall 2018 when he graduates from the college. Fonseca said he will be attending graduate school at the University of Minnesota studying in the Microbiology, Immunology and Cancer Biology Ph.D. program.

He also had the opportunity to participate in many conferences, internships and a study-abroad program. Fonseca said that he lived in Texas in the summer of 2016, when he received a Dana Internship through the provost’s office at the college. The Dana student internship program is designed to provide educational work experience to students already receiving need-based financial aid. In the program, he said he studied at the University of Texas with Zachary S. Campbell, a Ph.D. student at the college.

In the summer of 2017, he lived in Boston and participated in the Amgen Scholars Program at the Massachusetts Institute of Technology. The Amgen Scholars Program provides students with the opportunity to engage in hands-on research. In the same summer, he traveled to UCLA with Lo and three other students for the International C. Elegans Conference where he presented his research on C. elegans.

As a first-generation student, he said, he did not know of all the opportunities that the college could offer him.

“One of the things that kind of always sticks out to me is, as a first-generation college student, I never really imagined what I could do in college,” Fonseca said.

Additionally, Fonseca said he also had to take on several jobs on campus to help him financially, including being a resident assistant since his sophomore year.

“It has definitely provided some challenges trying to balance a full course load, multiple jobs and some semblance of a social life,” he said. “Despite any of these challenges, however, I think that living these experiences has provided me a unique perspective as I move through the world.”