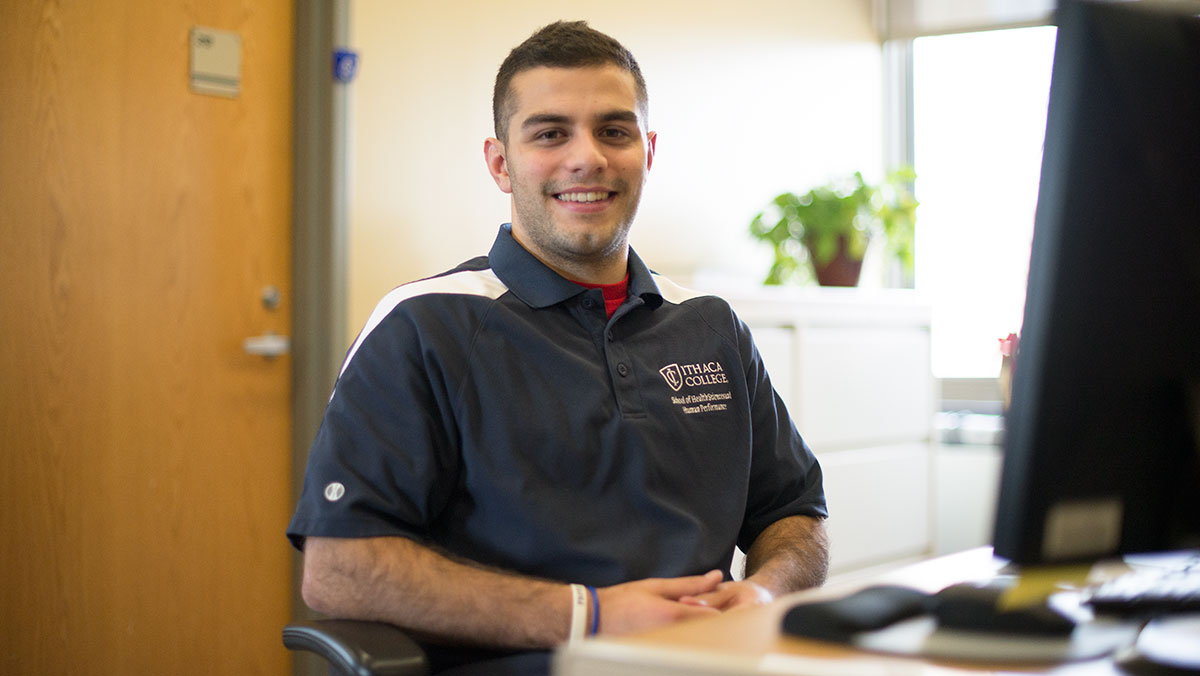 Tommy Battistelli/ The Ithacan
Vito Boffoli is bringing his involvement with occupational therapy to the national scene as a student representative at the American Occupational Therapy Association Annual Conference in Nashville, Tennessee, from April 16–19.
By Madison Bess — Staff Writer
Published: April 15, 2015

Not only was senior Vito Boffoli a captain for the football team this past season, but he is also the president of the occupational therapy club, taking the leadership roles in the two most forefront areas of his life.

“I chose occupational therapy because I like the occupation behind it,” Boffoli said. “I like engaging patients in meaningful occupations. Since I have been in high school, I have always wanted to make a difference in someone’s life and help them in any way I could.”

Boffoli is bringing his involvement with occupational therapy to the national scene as a student representative at the American Occupational Therapy Association Annual Conference in Nashville, Tennessee, from April 16–19. His role is to both contribute ideas and bring back knowledge to Ithaca College’s program.

“I’ll have a chance to contribute ideas to further help professional development,” he said. “I would love to have the opportunity to speak at one of those events one day.”

Boffoli began playing football when he was 6 years old and later became a slot receiver for the Bombers. He said the discipline of playing football has contributed to the work ethic he has as a student and an athlete.

It is this hard-working mentality that senior Tom Dempsey, a friend and teammate, said is Boffoli’s best trait.

“He works extra hard whether it’s on the field or in class,” Dempsey said. “It makes me double-check my own personality.”

Dempsey has been a friend of Boffoli’s since their freshman year when they started playing football together.

“I remember the exact day I met him,” Dempsey said. “He came late to football camp because he was a walk-on. We were at Terrace Dining Hall, and his roommate introduced him to everyone. He was really quiet and just waved to us.”

Offensive Coordinator Ryan Heasley said he has enjoyed watching Boffoli develop from his shy self over the last three years.

“He went from a quiet sophomore who played a couple snaps a game to a key component of our offense,” Heasley said.

Dempsey and Boffoli had a close relationship on and off the field with Dempsey being a quarterback and Boffoli being the receiver.

“We had a pretty close working relationship,” Dempsey said. “Throwing passes to someone like him was easy because he worked hard and made sure everything was easy for me to get my job done.”

Dempsey said Boffoli had an impact on him not only as a teammate, but also as a friend.

“It sounds exaggerated, but he just makes me a better person,” Dempsey said. “The fact is that he makes me better in all areas of everything. He is one of the kindest people you will ever meet. His smile and every greeting he passes along to someone else makes me want to be as kind and generous.”

Heasley said his favorite part about coaching Boffoli was that he goes beyond the call of duty in order to perform his best as a team player.

“He was a student of the game,” Heasley said. “I can’t count the hours he took outside of practice or meetings to meet [with me] to learn what we were doing offensively to hone his craft of playing receiver or studying film to understand how our opponent was playing defense.”

Boffoli has exemplified leadership toward younger teammates as well, Heasley said, acting as a mentor and teacher both during and outside of practice. In a word, he said he would describe Boffoli as trustworthy.

This was one of the many reasons for which Boffoli was chosen by his peers to be captain through a blind vote, Heasley said.

Some of Boffoli’s best memories took place on the football field, particularly winning the Empire 8 Championships his junior and senior years.

Now that the season is over, Boffoli is focused on his involvement in two clinics at Longview, the assisted living community partnered with the college, which include the adult clinic and the center for life skills, where he said he treats one client each week.

“I have the ability to co-treat with other health disciplines and work together to help reach clients’ goals,” he said.

This summer, before his fifth year at the college to complete his degree, Boffoli will be working at a skilled nursing facility in Fishkill, New York.

After his time at the college is over, Boffoli said he would like to get into practice to be a clinician and to be a leader in the occupational therapy field.

“I really don’t know where I am going to end up, but I am excited that I am in such a great profession,” Boffoli said. “When it is all said and done, I am going to start working and make a name for myself in the occupational therapy world.”