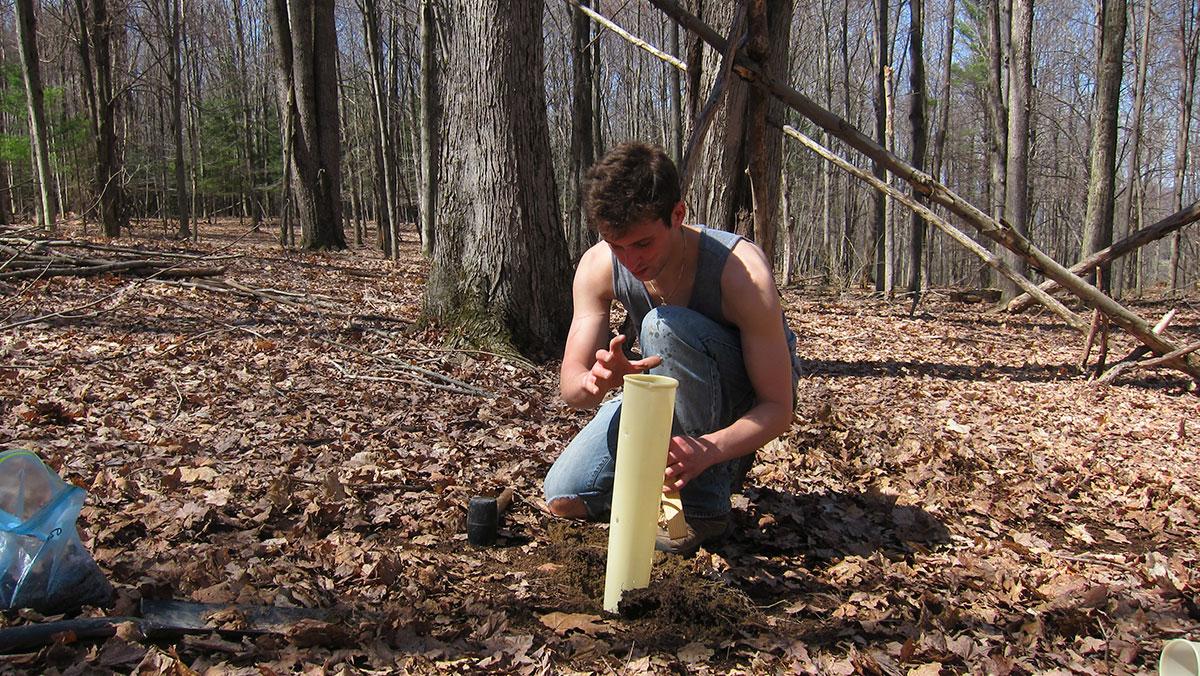 Senior Jordan Frey stopped to lean against a tree and take a break, breathing heavily. He was hauling a 55-pound coil of welded wire fence up a steep hill into Ithaca College’s Natural Resource Reserve in Newfield, New York. As he caught his breath, he gestured to a thinly wooded area off to the left, only a few yards away.

“I could have put them there, but it’s too close to someone’s house,” he said. He pointed farther up the hill to the location he chose — still quite a distance to go with his heavy load. However, he said the exhausting, steep trek with the heavy equipment to the final site would be worth it.

“There’s good access to sunlight,” Frey said. “The soil is good, not too much undergrowth.”

Frey was referring to the ideal conditions for planting trees — in particular, the endangered American chestnut, which was almost completely wiped out by a fungal blight introduced in the early 1900s from Japan. Frey, a senior environmental studies major, is working to reintroduce them on college lands. The bales of wire would be used to ward off hungry deer.

The effort to bring American chestnuts to the college’s land began in 2011 with Jeff Hatzel ’12, Frey said, but after Hatzel graduated the project fell by the wayside. Frey found out about the project after seeing signs and fencing in the Ithaca College Natural Lands. Realizing he needed research credits to graduate, he said he thought it would be a good way to fill the requirement.

“I took it on because I needed credits, and it turns out I love it,” Frey said. “It’s one of the best decisions I’ve made since I’ve been here.”

Jake Brenner, assistant professor in the Department of Environmental Studies and Sciences and the faculty adviser for the chestnut project, said he thinks it is one of the most important projects currently being conducted in the Natural Lands.

“He took this project that was in shambles and breathed some life into it, reorganized it, rebuilt the database and now ordered more seeds,” Brenner said.

After Hatzel graduated, the binder that held all of his original data was lost, Brenner said. Once he took over the project in May 2014, Frey said he had to track down and re-document the trees Hatzel had planted at two sites in the Ithaca College Natural Lands: one near the Clinton B. Ford Telescope Observatory and the other farther south near Gas Line Road.

The American Chestnut Foundation, a non-profit organization dedicated to breeding blight-resistant chestnut trees and reintroducing them to Eastern woodlands, donated 308 seeds to Frey for planting. The seeds are hybridized with the Chinese chestnut to inherit the blight-resistant trait.

With some volunteer help, Frey is now replanting the two sites Hatzel selected, which have very few surviving trees from the original planting. Additionally, Frey is planting at two new sites: the Raponi Wetlands in the Natural Lands and the Natural Resource Reserve in Newfield.

To ensure the continuity of the project after he graduates, Frey wrote “The Ithaca College American Chestnut Handbook,” which gives general information on chestnut trees, as well as how to plant and manage them. The document is currently about 40 pages long, and Frey said copies will be stored in Brenner’s office, the Williams Hall geography lab and in the lab of Jason Hamilton, the chair of the environmental studies and sciences department. Brenner said as handbooks go, it’s one of the best.

Frey also recruited a student to take over after him: sophomore Kerry Schulz, an environmental studies major. Schulz said she learned about the project when she and Frey tabled for the Natural Lands at an organization fair together and he encouraged her to get involved. Schulz helped Frey with planting the new seeds, and she said next year her job will mostly be monitoring them.

Frey, who is from northern New Jersey, said he has always been interested in the outdoors. He remembers his parents discussing environmental politics when he was young, and he said his father took him on many hikes.

“I can be stressed out about anything — school or friends — but I can go outside, and however long I’m out there I’ll forget about everything,” Frey said.

After graduation, Frey will be moving on to a marketing and communications fellowship with the Cooperative Institute for Limnology and Ecosystems Research at the University of Michigan. He said his ultimate goal is to have a career in environmental health and safety.

Frey said although he is ready to move on to the next part of his life, it will be bittersweet leaving the restoration project behind. He said he hopes the project will be an educational resource for future students.

“Besides the fact that it’s going to be pretty cool to have this endangered species growing on campus, I think that it will help future environmental studies students and others that are interested learn about [the] chestnut tree,” Frey said. “Hopefully they grow large enough to start producing seeds, and maybe people can enjoy eating and roasting chestnuts like they did a hundred years ago.”