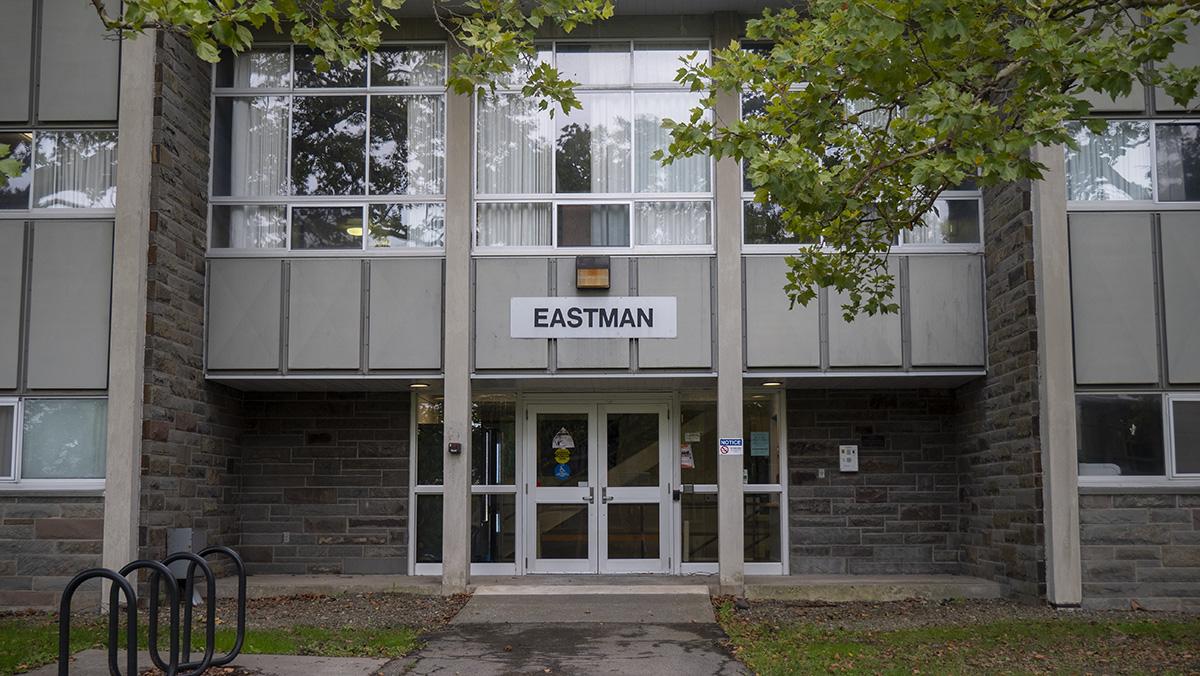 Mari Kodama/The Ithacan
The plan to convert Eastman Hall into living space for seniors and graduate students was announced in Spring 2022 in an email to juniors from the Division of Student Affairs and Campus Life. According to the college’s website, the cost to live in Eastman Hall is $9,900 for the 2022–23 academic year. A single room in a residence hall typically costs $10,375.
By Liam McDermott — Contributing Writer
Published: October 26, 2022

The plan to convert the dorm hall into living space for seniors and graduate students was announced in Spring 2022 in an email to juniors from the Division of Student Affairs and Campus Life. Eileen Roth, assistant director for Residential Education and Assessment in the Office of Residential Life, said ResLife wanted to give seniors and graduate students the option to live on campus if it would be financially beneficial or more convenient.

“We knew there was definitely a need with our student population, students that maybe wanted to live on campus or there wasn’t a good fit of off-campus housing for them,” Roth said. “So we wanted to create a specific space at a discounted rate that students could be on campus if they so choose.”

Roth said situations like having to eat at the dining hall again may be a downside for seniors and graduate students, especially if they lived in the Circle Apartments or Garden Apartments in previous years.

“Overall students are happy with the [housing] rate that it’s provided at and they’re happy that they’re remaining on campus and that they get the discounted meal plan as well,” Roth said.

According to the college’s website, the cost to live in Eastman Hall is $9,900 for the 2022–23 academic year. A single room in a residence hall typically costs $10,375. There are 45 single living spaces in former double rooms and 17 traditional singles. Amanda Walrad, housing coordinator in the Office of Residential Life, said all of the rooms are occupied.

Senior Kevin Gyasi-Frempah lives in Eastman and said it caters to the situation he is in this academic year.

“I’m graduating in December, and I thought it would be easier for me to leave before the start of the spring semester then go into a Garden Apartment or wherever,” Gyasi-Frempah said. “It just felt a lot easier on my part since I’m not gonna be staying the whole year. Last year, I lived in Terraces, and it was, like, a long walk to a lot of places, especially to classes. It’s just a short two-minute walk away from [the] Campus Center and the Fitness Center.”

Graduate student Alexis Militello also lives in Eastman and said that it is more convenient for her than the hassle of trying to live off campus.

“I don’t have a car, so just the thought of trying to get a car and apartment and figure all that out seemed complicated,” Militello said. “It seemed easier to just go to a place that had a good deal and was just made for seniors and grad students and was conveniently on campus.”

Although students seem to be enjoying staying in Eastman Hall, they were warned that it would not have the amenities that other seniors who live off campus or in Circle Apartments or Garden Apartments get, including private bathrooms, full kitchens and bigger living spaces. However, there are special amenities included for residents in Eastman Hall that are different from other residence halls in the Quads. These amenities include a microfridge in each room and a meal plan with 21 swipes each week and $210 in Bomber Bucks each semester.

“We haven’t heard much feedback on the survey around the bathrooms,” Roth said. “We had a few students that just gave some general feedback of some suggestions of changes in the future, but we really tried to be transparent of the building that they were going to be in. So nothing was a surprise for students.”

Senior Luis Rodrigues said the bathrooms in Eastman and the ones in his first-year residence hall are mostly the same.

“I was lucky enough to not have super messy people my freshman year,” Rodrigues said. “But I’d say [bathroom hygiene] hasn’t changed much in my experience.”

Unlike the first-year student dorms, Eastman Hall has one head resident instead of having a resident assistant (RA) on each floor.

Walrad said staff is required in the building, but that they wanted a more relaxed system of monitoring student conduct.

“The head resident position was created specifically for Eastman Hall,” Walrad said. “We wanted a staff presence in the building but something different than a traditional RA that would provide seniors and grad students with a feeling of more independence. The head resident is more like a building manager and plans events and works with the Eastman Council.”

The head resident at Eastman Hall is senior Sam Hefti.

Hefti also said the head resident is offered more perks than normal resident assistants have. The head resident at Eastman Hall gets their own office and oversees an advisory board made up of students who live in the building.

“Originally they had asked for someone that could stay the full year, and then they had changed the requirements,” Hefti said. “I’m graduating in December. So given that opportunity, I decided to take it up because there is a pay incentive as well. I get full room and board plus $1,000 per semester.”

Hefti says that she loves her position as head resident and that it brings her joy.

“I think it’s a really good position for seniors here who are RAs,” Hefti said. “I get my own room. I get … an office space to work in. … It’s just really convenient to be close to everything on campus, and my residents are incredibly kind.”