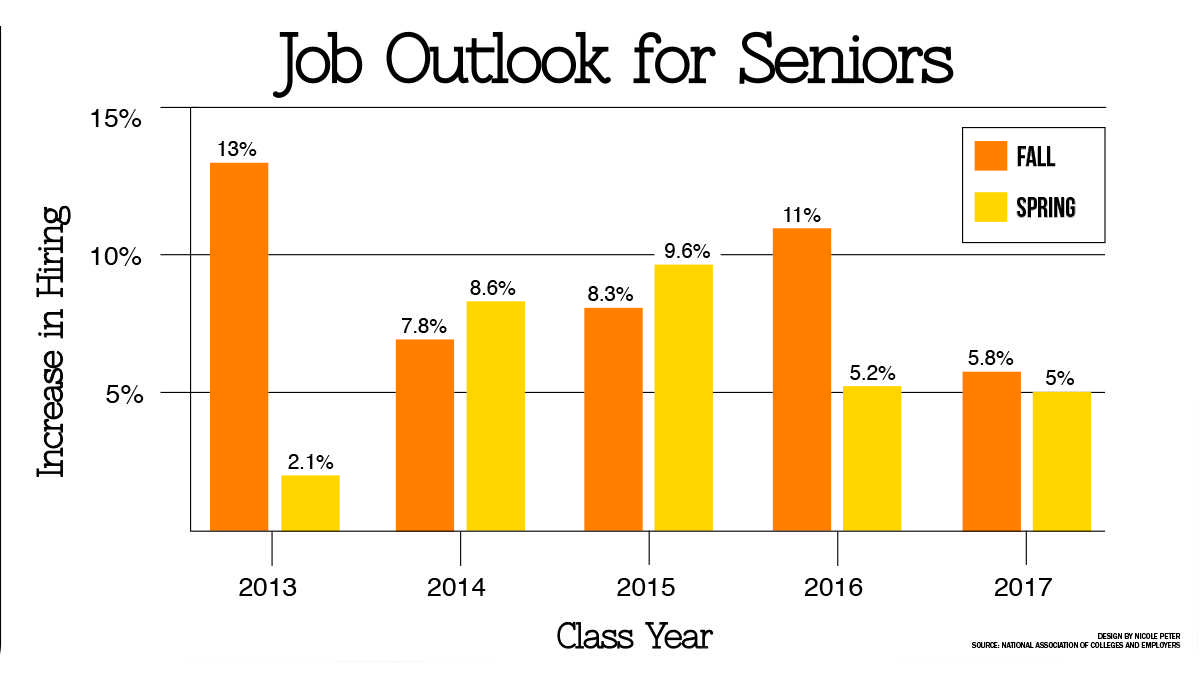 As the end of the school year approaches, Class of 2017 college seniors have something to look forward to besides graduation: the fact that more of them could be hired than those from the Class of 2016.

The National Association of Colleges and Employers released its Job Outlook 2017 Spring Update April 19. Findings show employers are expected to hire 5 percent more college graduates from the Class of 2017 than they did from the Class of 2016. The study also shows that majors such as engineering, business and computer science are taking some of the highest percentages of new recruits.

Andrea Koncz, a research manager for NACE, wrote in an email that she thinks this increase is part of a consistent pattern with college hiring over the last few years. One factor Koncz said impacted this increase is the need for employers to keep up with their growing businesses.

John Fracchia, associate director of the Office of Career Services, said another factor in this growth is the economy. He said that since 2011. he has seen the numbers of jobs and internships increasing for students.

“I think we’ve been in sort of a steady economic recovery over the last five to six years,” Fracchia said. “And I think this is just a reflection of that taking route.”

Koncz said  that while the Class of 2017 will have more opportunities for jobs, more open positions do not necessarily guarantee placement.

“Class of 2017 graduates should have success in this year’s job market,” she said. “However, it is important for graduates to prepare early on for their job search. Many students do internships and related work experience prior to graduation, and some receive offers before they graduate.”

Senior Scott Goodheart is an example of one of these students. He will be working for a finance solutions company after graduation, the same company he interned with last summer and over winter break. He said he was first made aware of the job opportunity while interning during the summer and began interviewing for the job then. He did not find out he received the job until the last day of his winter internship.

“The process was challenging, and I wasn’t looking anywhere else,” Goodheart said. “I kind of had all my eggs in this basket, but if it fell through, I definitely would have been floundering for a bit.”

Fracchia said one opportunity the increase of jobs brings to seniors is the possibility of a job market with more choices, but only if the student is self-driven.

“If you are engaged, you might have some really interesting choices of things you can do — I think that’s really exciting,” he said.

After interning in New York City for eight months during her junior year, senior Jamie Shum said she knew she wanted to end up in that location postgraduation. She learned about an opportunity, an executive training program with the public relations firm Ruder Finn, when one of her professors mentioned it in passing. Shum said that without establishing this connection with her professor, she would have not known about the opportunity.

Shum said her interview process was quick, and she learned she received the position in mid-April. She said a couple difficult parts of the process were catering her application to fit the position she was applying for, as well as finding the time to complete the application.

Fracchia said he encounters students who have a variety of plans for after graduation. He said whether a student’s path be a job, internship, graduate school, a gap year or a service-based program, career services can help.

“The good news is we have resources for pretty much anybody who comes in,” he said.

Goodheart said many of his peers are still unsure of what they are doing after graduation, and many are currently going through the process of applying for jobs. Regarding the NACE statistics, he said he has not seen much of a difference in employment rates between those he knew from the Class of 2016 and his fellow seniors.

“I haven’t really noticed the uptick with more people getting jobs compared to my friends last year,” he said.

Shum said there is a healthy mix of her peers who have accepted jobs after graduation and people who are still looking and applying. She said she thinks seniors should be open-minded and not limit themselves when trying to look for opportunities for after graduation, even if the job is not what they envisioned themselves doing.

“For me, I love entertainment and arts, but Ruder Finn is more towards healthcare,” Shum said. “Although I won’t necessarily be working in my dream industry, I find it’s important to have something where you can at least get your foot into the door, and you can make your way up as you go.”

Deanna Alvarez is an integrated marketing communications senior who is still looking for a job after graduation, but she said her internship at the Tompkins County Chamber of Commerce, among other internships, have helped her find her niche.

Class of 2014 to enter into favorable job market