Severe drought persists in Ithaca as students return to campus 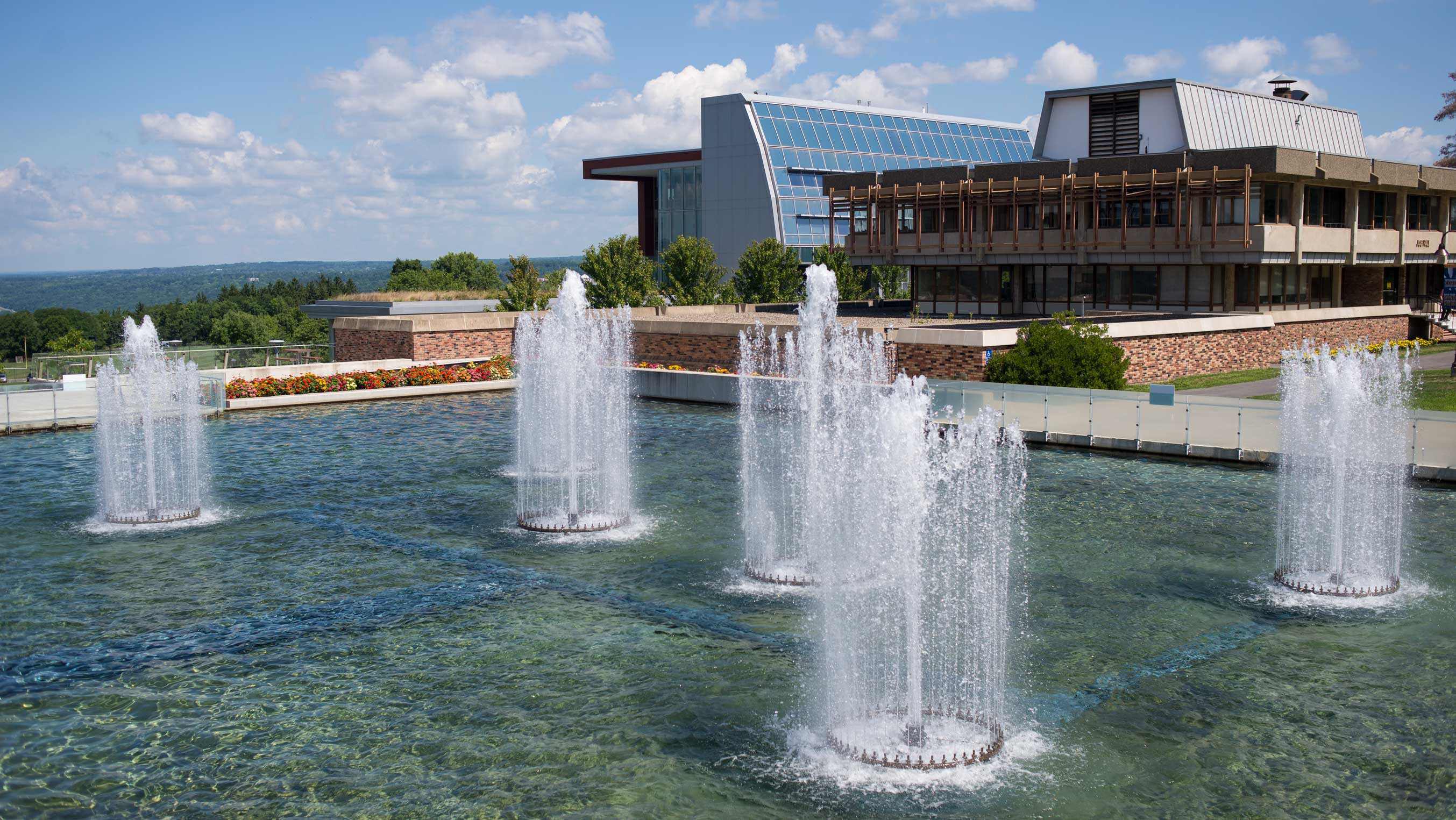 Fernando Ferraz/The Ithacan
As Tompkins County experiences the worst drought since monitoring began in 2000, Ithaca College is increasing its efforts to conserve water, both through the Office of Facilities and The Office of Residential Life. One of the measures facilities has taken is a 50 percent reduction of the height of the Dillingham Fountain.
By Daniel Hart — Staff Writer
Published: August 31, 2016

With over 25,000 students returning to the Ithaca area, Ithaca College is in the process of assessing long– and short-term water conservation efforts in the midst of the worst drought in Tompkins County since monitoring began in 2000. Despite recent rain, the drought is still in effect.

At the end of July, the college announced it would begin voluntary water conservation efforts, including halting the washing of outdoor surfaces, a 50 percent reduction of the height of the Dillingham Fountain, and fixing leaks and unnecessary water flows. Since then, the Office of Residential Life has amplified efforts to educate students, including providing resources on conservation in almost every residence hall, as well as sharing information on social media.

Frank Kruppa, public health director for Tompkins County, said that despite noticeable rainfall in recent days, the drought is still in full effect.

“We have had rainfall, but that is rainfall that would be expected during that timeframe — not enough to make up for the rainfall we did not get earlier in the summer,” he said. “We certainly are still in a drought condition, and we are asking folks to conserve water wherever possible.”

Greg Lischke, director of energy management and sustainability at the college, echoed the thought, saying that while rainfall in recent days has helped, the drought still proceeds.

“I think it’s a cumulative effect,” Lischke said. “Hopefully we’re not talking a multi-year accumulation like our citizens out on the West Coast in California.”

He said the college’s daily water usage has gone down by about 25 percent since it began conservation efforts in July. 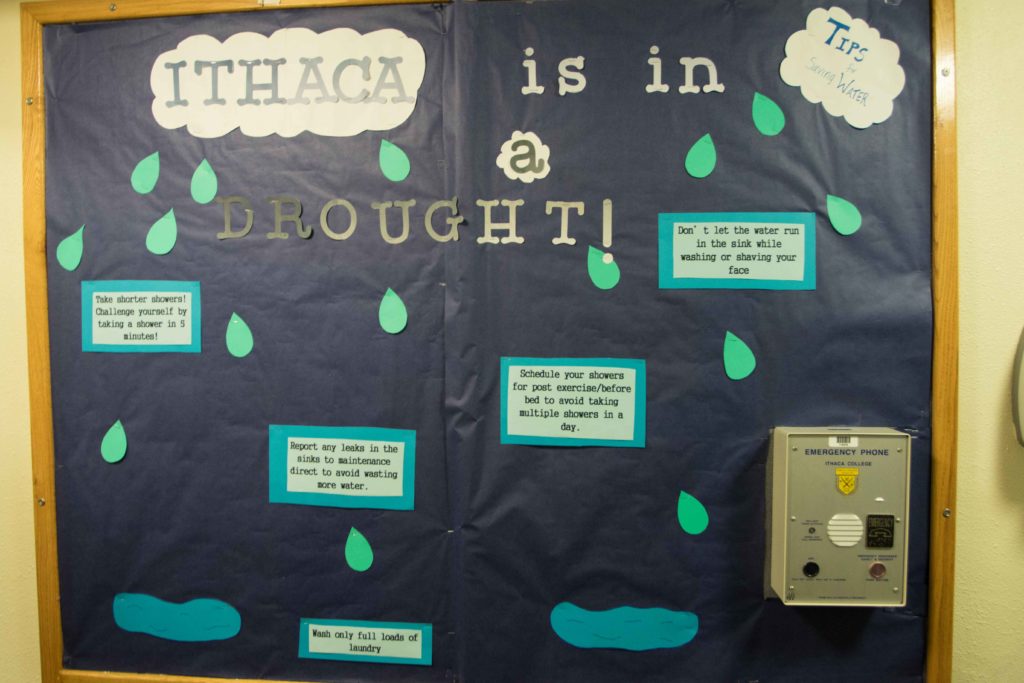 With students now back on campus, Jenny Pickett, assistant director of the Office of Residential Life, said individual efforts to use less water are significant. Residential Life has been working to convey information about the drought and ways to conserve water to students, including through bulletin boards in every residence hall, Pickett said.

“When the city started asking residents to conserve water, we had very few students on campus at that time,” Pickett said. “We really focused on putting together educational materials that would be ready when the students got back.”

Dani Perkins, coordinator in the Office of Residential Life, worked with a student staff member to create bulletin board materials and signage to give to resident assistants, and residence directors so each residence hall could create boards outlining conservation efforts, in time for students returning to campus.

The material Perkins helped gather into an electronic document included photos, articles and other information about the drought, as well as a how-to on assembling the board.

In addition to the bulletin boards, Perkins said, Residential Life has been sharing tips on social media.

“It’s ongoing, and we are definitely talking to students about it,” Perkins said.

Anissa Ash, an RA in Emerson Hall, said all of the Emerson RAs decided to create the water conservation bulletin boards on each floor of the hall. She said it is especially important to release this information in Emerson, as every room has its own bathroom.

The college’s water supply is the Bolton Point Water System, while Cornell University and the City of Ithaca are supplied primarily by Six Mile Creek, a source more affected by the drought. Dan Cogan, chief of staff for the City of Ithaca, said while the water deficit does not affect the college directly, its conservation efforts help the community. He said the city has been purchasing about 400 thousand gallons of water from Bolton Point each day while the city’s water treatment plant is undergoing construction, adding to the stress on local water supplies.

“We’re all working together, trying to figure out whose needs are the greatest and who can afford to kind of make it on their own,” Cogan said.

Lischke said he has been periodically checking in with Bolton Point to stay informed on the status of water availability and conservation needs.

George Lampila, supervisor of mechanics in the Office of Facilities’ maintenance department, said the department independently decided in late July to cut water usage by raising the mineral content limit of the water in the 17 cooling towers on campus. In other words, by allowing for more mineral waste to be left behind in the towers, less water will evaporate and be wasted.

However, Lampila said the downside to raising the mineral content is that when a cooling tower is cleaned out less often over an extended period of time, it becomes less electrically efficient. Because of this, Lampila said he hopes the drought will subside soon and the maintenance department can go back to cleaning the cooling towers more regularly.

In a release earlier in the month, Kruppa said the city still needed about 6–9 inches of rain to get water levels back to normal. Almost a month later, he said this is still the case.

“So we have gotten some rain here in the community, and we have seen our creek levels rise a bit, which is good news, but we’re not out of the woods yet,” he said. “We had a pretty significant deficit during the drought, and the drought continues, so it’s going to take a lot more rain to get us back to normal flows.”