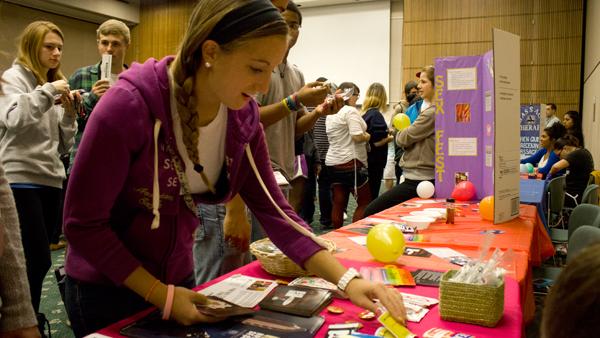 Students were as eager for free condoms as they were for free and open discussion about safe sex at Ithaca College’s annual Sexfest on Monday night.

Sexfest is sponsored by the Residence Hall Association and encourages honest and open discussion among students, particularly freshmen, about safe sex and sexual equality.

There were several tables at the event that featured condoms, lubricant and informational pamphlets. The tables and activities contributed to the judgment-free atmosphere at the event.

Sophomore Helena Murphy, vice president of RHA and one of the organizers of Sexfest, said sex is a complex and personal part of everyone’s lives, and each person has different sexual needs and preferences.

“Sex is an important part of a person’s development,” Murphy said. “Some people have an emotional connection to sex, others don’t. It depends on the person.”

There was a raffle for massages, vibrators and cock rings before a trivia game in which a team of men faced a team of women. The women’s team won the game after answering the tiebreaker question correctly.

There were tables at the event that provided information about topics like lube usage and aphrodisiacs. Planned Parenthood also had a table where they offered information on healthy relationships and STD prevention.

During the event, Mainville answered anonymous questions from the audience that centered on dispelling sex myths.

Sexfest wasn’t just about promoting safe sex but also about encouraging and embracing equality of all sexualities. Gay and lesbian relationships entered the open discussion about sexuality at Created Equal’s table.

“We need to talk about sex and especially sexuality, and there’s a difference between intercourse and finding your identity,” Kayiza said. “We’re open to pansexual, bisexual, gay and lesbian students.”

Kayiza related the need for sexual equality to the Civil Rights Movement of the 1960s.

“If our government was more accepting, we’d have a better society,” Kayiza said. “That means we need to break down stereotypes.”

Several attendees came from conservative schools or families where sex was rarely discussed. Sexfest presented an opportunity to enter the conversation about sexuality without having to feel awkward or face social stigmas. Freshman Andrew Murphy said the college’s promotion of open discussion of sex is beneficial.

“I was used to a no sex policy, but a policy of safe sex is more realistic because people are going to have sex anyway,” Murphy said. “It’s better to have an open environment instead of seeing sex as a taboo.”