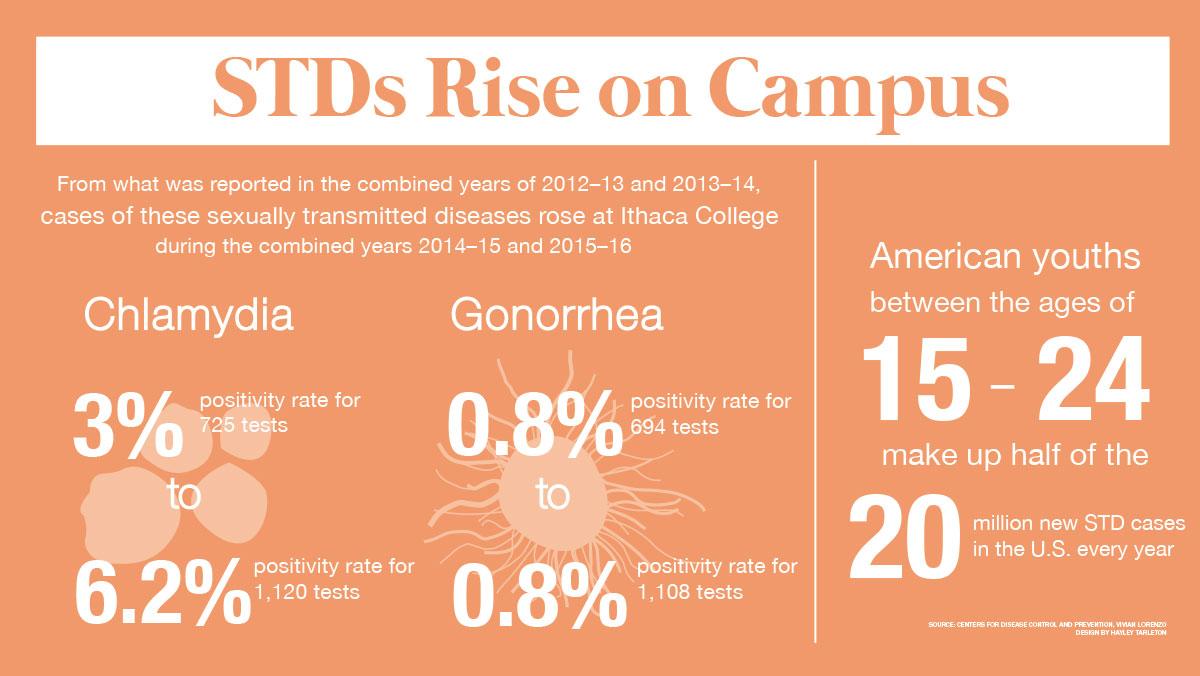 Ithaca College has seen a rise since 2012 in the number of sexually transmitted diseases reported by students.

Additionally, from 2015 to 2016, Tompkins County saw a rise in STDs reported. Chlamydia cases rose from 342 to 374, gonorrhea cases from 55 to 81 and syphilis cases from five to 12. Lorenzo said the Health Center has to report its number of STD cases to the Tompkins County Health Department under public health law, and also said she thinks the numbers from Tompkins County would likely include cases from both Ithaca College and Cornell University.

The Centers for Disease Control and Prevention reports that American youths between the ages of 15 and 24 make up half of the 20 million new STD cases in the United States each year.

One reason this age group is more at risk of getting STDs is that those in it may not be in a monogamous relationship and therefore have more sexual partners, Lorenzo said. Additionally, biological reasons such as exposed cells on the cervix make young women more susceptible to STDs. This anatomy changes with age.

Lorenzo also said the increasing popularity and use of hookup apps contribute to young people’s being affected by STDs.

“I think that in the increased use of hookup apps, we are seeing an increase in STDs, and it is harder to track contacts and make sure they get treated,” Lorenzo said.

Maureen Kelly, vice president for programming and communications at the Planned Parenthood of the Southern Finger Lakes, stated via email that on the national front, there has not been a federal increase for STD programs in the United States since 2003. Kelly also stated she thinks the decrease in funds has impacted the general approach to the testing and treatment of STDs and that it poses a concern for public health. The funding cuts come through the Department of Health to the Tompkins County Health Department, which the Planned Parenthood of the Southern Finger Lakes receives funds from to be a county STD testing and treatment clinic, Kelly stated.

“We have seen budgets cut. We have seen those budget cuts impact hours and access, and we are understaffed and struggle to do the work that we know works. … For instance, we know community outreach and prevention education programming are very effective, yet our funds to do that have steadily been receding over the years,” Kelly stated.

Social stigmas around talking about sex could also be a reason STD rates have been increasing, Kelly stated.

“In my opinion, the lasting impact of shame, secrecy and discomfort talking about sex-sexuality is invasive and harmful,” Kelly stated. “What we know from places like Germany, France and the Netherlands is that talking, educating, providing access to care, testing and treatment can help almost eradicate STDs. … We need to do better.”

Rachel Gunderson, instructor in the Department of Health Promotion and Physical Education, said schools all over the country teach sexual education differently.

“Sometimes they include sexuality in health class as young as K through sixth,” Gunderson said. “In some places, it’s just high school. In some places, they just leave it all up to the parents to teach their kids about sexuality.”

She also said some states are not required to give accurate health information about sexuality, letting schools decide what they want to teach their students.

“It’s pretty scary, as a health teacher, because you’re like, ‘Somebody could be giving wrong information because they want to put their morals into what everyone should be doing,’” she said.

To try to reduce the number of STD cases in the region, Gatch said, the Tompkins County Health Department is continuing work with partners in the area — such as Planned Parenthood of the Southern Finger Lakes, Southern Tier Aids program and health services offered at Cornell University, Ithaca College and Tompkins Cortland Community College — to increase education and outreach efforts.

“Specifically with party hookups, sometimes people don’t always have a condom, and they’re at more of a risk because they don’t have sober thoughts to say, ‘Hey, maybe I shouldn’t do this. There are risks,’” he said.

Case also said he thinks there is still a social stigma around people going to seek help for STDs.

“If you think of it not any different from a common cold or the flu, then I think it’s easier to ask for help,” Case said.

Lorenzo said the Health Center offers education on STDs, testing, treatment and exams for students. She said she thinks students at the college are receptive to coming to the Health Center and seeking services offered.

“I think that we offer a really welcoming and nonjudgmental environment for anyone to come in and talk about any concerns,” Lorenzo said.

One year later, some concerns remain about CAPS