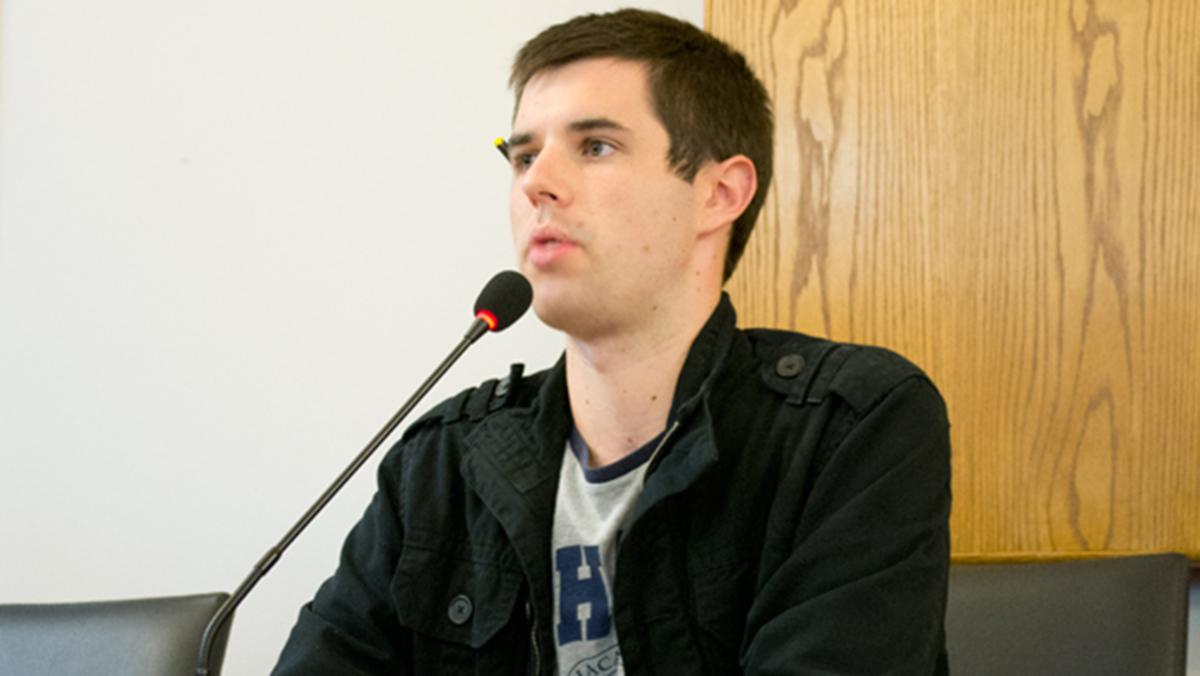 The Ithaca College Student Government Association is now using electronics and the Internet to increase transparency for the student body and plans to offer that technology to other student organizations.Recording microphones were implemented at SGA meetings to live stream them online, an idea the executive board campaigned on last spring.“These microphones were a campaign promise we made that we are delivering on,” senior Rob Flaherty, SGA president, said. “One of the biggest issues that comes up in our student elections is how to make our meetings easier to access, and this suggestion actually came from a number of students who spoke with me during the election period.”

The SGA senate tried the microphones for the first time Sept. 24. However, there were issues with the system. They then live streamed their Oct. 1 meeting privately to make sure the system worked properly, which it did, Flaherty said.

Flaherty said meetings will go live at 7:15 p.m. every week, and the first live stream available to the public will be Oct. 8. The link to tune in will be found on the SGA website. He said the microphones will stay on during the entire meeting.

Sophomore Ayesha Patel, SGA vice president of campus affairs, said the microphones will also be available for other organizations to use to stream their meetings in order to increase transparency across campus.

The senate is currently looking for a technical assistant who will oversee the streaming as well as work on improving the websites of SGA and other student organizations, which is another student government initiative.

Last semester Flaherty said he wanted to make SGA more transparent by putting more focus on the progress of the task at hand than the procedural process of bringing about new initiatives.

The live stream will be hosted by a third party website, www.ustream.tv, but a link on the SGA website will take listeners directly to the SGA’s streaming page, Flaherty said. There will be no charge for the hosting, but the organization spent about $200 on the microphones.

“The money that we spent on this was surplus that came from cutting our organizational budget last year,” Flaherty said. “SGA went to great pains to find the best system for the lowest price, and for what we got, it was certainly not expensive.”

Three members of the SGA executive board attended a Cornell Student Assembly meeting last semester. The student assembly has used microphones and video to live stream their meetings with success, Flaherty said.

“After going to the Cornell Student Assembly last year, Rob Flaherty, myself and [senior] Rachel Heiss, who were on the student government e-board last year, thought it might be a good idea to invest in microphones and video recording equipment,” junior Robert Hohn, vice president of business and finance, said. “We obviously don’t have the video equipment right now, but we do have the microphones for live streaming.”

Patel said the microphones are a step in the right direction to reach the student body.

“What better way, if people can’t come to our meetings, than to live stream them online,” Patel said.

Junior Jihyun Rachel Lee, class of 2014 senator, said with recording the meetings senators will probably be more conscious of what they say.

“It makes people more responsible for what they are saying or more careful of presenting their opinions,” Lee said. “It is good to have a record of whatever everyone says in every meeting and how that goes so that next year, if we have to talk about something, [we have a record] or we can pass this to the next generation of SGA.”

However, Flaherty said this would not hold senators back from open discussion. On Monday the senate passed a bill against a controversial new media policy on campus. The senators were all engaged in the debate, he said.

“The microphones do add a level of accountability to what we say in meetings, but I don’t see that as a bad thing,” Flaherty he said. “To the contrary, the student body deserves accountability from its representatives.”

Patel said SGA will attempt to not hold any private sessions closed to the public during the meetings and instead stream all conversations that take place.

“We hope that senators will act as they normally do, even though there are the microphones there,” said Patel. “Currently, we haven’t gotten any complaints from people saying, ‘I’m not comfortable saying something,’ because I feel everyone understands it is an open meeting.”

Patel said she hopes students will begin to read the SGA agendas online, listening to sections of the meetings that are pertinent to them.

Other executive board platform items from the spring election are to come, Patel said.

“Currently, we haven’t explored our other initiatives because we’re still working on our first initiative [of transparency],” Patel said.

She said after they begin to live stream publicly, they will focus on other initiatives, some of which they have started already.

SGA has changed how bills are proposed and pushed through the senate this year. The new system requires senate approval to research a bill. After this research, the senate can vote on the bill. Patel said this helps expedite and focus the bill process. She has been meeting with each cluster of senators to discuss their ideas for the year and ways to accomplish their goals. Before this change, there was no formal process to pass a bill.

SGA is also hosting Taste of Ithaca, at which local restaurants offer students a taste of their food for free, on [date], Tuesday night of Spirit Week, and will be planning a First Year Experience mixer with senators. They are also trying to use social media to get feedback from students.

“We put up initiative trackers [on our website] so people can see what we’re working on. We’re also going out and asking people what they would like to see changed,” Patel said.