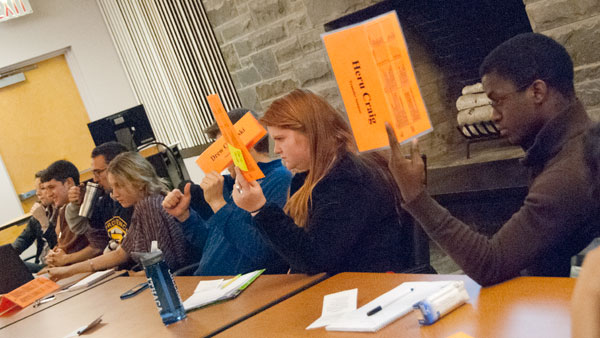 The Student Government Association is taking a stand with Ithaca College students who have voiced concern over the recent decision to close the Tower Club Lounge, a study space, student music venue and cafe on the 14th floor of East Tower.

Junior Joshua Couce, senator for the Class of 2015, drafted and presented a bill titled “Save the TC Lounge,” which passed at the SGA meeting Nov. 11.

The bill cited reasons why the TC Lounge should remain open, such as its importance as a space for students and faculty alike, the job opportunities created for students and Sodexo employees and its historical value as the location of a 1972 interview with Jean Kennedy Smith, sister of former U.S. President John F. Kennedy.

Couce’s bill recommended the TC Lounge remain open and resolved that the SGA will work with the administration to address the space constraints that led to the decision to close the lounge to accommodate the Physical Therapy program and shift Information Technology Services and the Office of International Programs to new locations.

Couce said one of his biggest concerns is the college administration’s lack of communication with the student body about this decision. He also said he is losing faith in the administration.

Couce said this opinion comes from him as a student and is not representative of the SGA as a whole.

Marisa Kelly, provost and vice president for educational affairs, was not available for a comment in response to this statement.

Junior Isuru Perera-Somasinghe, vice president of academic affairs, said while he understands the importance of the lounge to students and hopes an alternative option can be found for office space, in the end the college needs to prioritize its academics first.

“Our efforts here should not undermine our programs … at the end of the day, we are a college, and our focus is academia,” he said.

The original Intercom announcement from Kelly about the lounge was released around 1 a.m. Nov. 5.

By 9 a.m., Sophomore Dominick Recckio, SGA vice president of communications, had developed and released an electronic survey to gauge student opinions on the decision.

The survey quickly returned strong results showing opposition to the decision. By noon it had about 500 responses, and by the following day it had more than 1,000. Ninety-six percent of those 1,000 respondents reported they believe the TC Lounge is an important part of the college’s culture. Furthermore, 96 percent also reported that they wish they had been allowed to participate in the decision-making process.

Recckio said the most impressive part of the survey is that the two open-ended questions, which asked for alternative locations for ITS and ways to increase the visibility and profitability of the lounge, received more than 500 responses each, indicating the depth of student concern. Recckio said one memorable response came from a senior who had recently decided to donate money to the college, but in light of these events, changed his mind.

Sophomore Laura Schiller, a clinical health studies major on the physical therapy track, said she is glad the SGA is addressing the issue.

“Earlier in the summer, Ithaca College took away the Rochester portion of the PT program,” Schiller said. “Now that that decision is sort of spilling over into affecting the rest of the student body … it’s taking away two aspects of my life that I look forward to.”

This situation has left students with many unanswered questions. Sophomore Kyle James, student-at-large senator, said the administration needs to reveal its decision-making process to the student body.

“I feel like what needs to be communicated is: Why was TC Lounge chosen?” James said. “Why not somewhere else on campus? … The students need to be involved in that; we need to be shown that all avenues have been explored and [the lounge] was the only thing that worked.”

When the bill was tabled, an amendment was added and passed, resolving that if administration went ahead with these plans, the SGA would work to find another space on campus for a new student lounge.

James said he is concerned that this amendment weakened the bill and could allow the administration to be less accountable for explaining their decision to students.

“[It’s] called the ‘Save the TC Lounge’ bill,” he said. “With that amendment, I feel like it potentially gave the administration an out.”

Recckio said this situation is very similar to last year’s media policy debacle, when President Tom Rochon required all student media to route requests for interviews with administrators through the college’s Office of Media Relations.

“It was something the administration decided without student input, and the students gathering around that was so similar to this,” Recckio said. “It was awesome to see the students stand up for something they believe in.”

Couce said with enough pressure on the administration, the TC Lounge can be saved, just as the media policy was repealed.

“Rochon made [the media policy] decision without consulting really anyone, but when mounting pressure came upon him both from the Park School and from alumni, and when it hit the fan and went viral, all across USA Today and other college websites, he repealed it,” Couce said.

Like Couce, Schiller said she believes the college needs to focus more on students.

“I understand that college these days, it’s a business,” Schiller said. “But, we’re not numbers that you can crunch. We’re people. We’re people with feelings and attachments to places, and you can’t just take away those places … to make room for your business.”