SGA gives access to voting results to adviser, not president 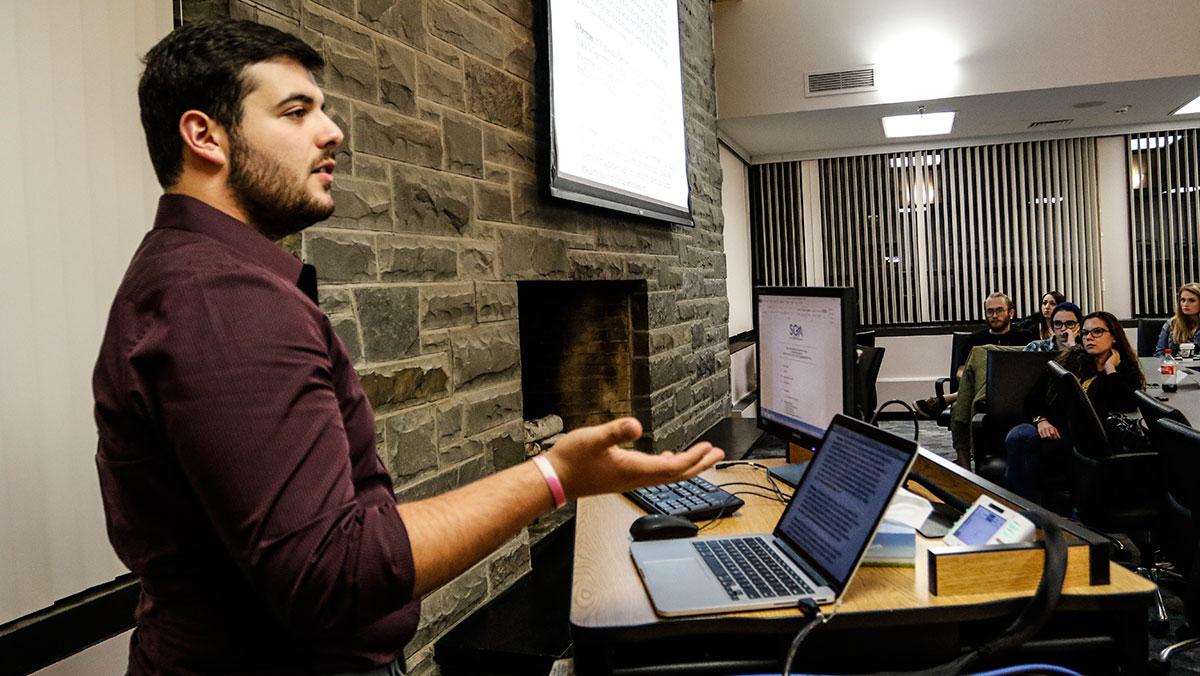 Yana Mazurkevich/ The Ithacan
Concerns arose at the SGA meeting after senior Dominick Recckio, the president of the SGA and the sponsor of the vote of no confidence bill, said his plan was that he would be the only person who would have access to the results of the vote during the voting period.
By Evan Popp — Staff Writer
Published: November 4, 2015

Ballots for the Ithaca College Student Government Association’s student vote of no confidence were emailed to each student at the college Nov. 4.

The SGA debated at its Nov. 2 meeting how the results of the upcoming student vote of no confidence in President Tom Rochon should be handled during the voting period. The SGA decided to give access to that data solely to Garrett Downing, First-Year Experience program coordinator and the adviser of the SGA.

The SGA senate unanimously passed a bill Oct. 26 to initiate a vote of no confidence in Rochon after protests were held regarding the college’s racial climate, spearheaded by the group POC at IC. In addition to race-related issues, the SGA’s bill also cited concerns about a lack of inclusivity in the college’s governing structure and in interactions between students and Rochon, as well as unstable leadership within the top levels of the administration.

Concerns arose at the SGA meeting after senior Dominick Recckio, the president of the SGA and the sponsor of the vote of no confidence bill, said his plan was that he would be the only person who would have access to the results of the vote during the voting period. Since Recckio has already told The Ithacan he has no confidence in Rochon, some members felt having him be the only one observing the results of the vote as they come in could be perceived as bias.

Senior Kyle James, SGA vice president of academic affairs, said there could potentially be an argument made for bias surrounding the vote because Recckio would have been the only person who would have seen the results and he has already made his position on the vote of no confidence clear.

Recckio said having only one person see the results come in and not making it open to everyone was so people couldn’t see which way the vote was trending and then influence the vote through that information. When explaining how he would have been the only one to see the results, Recckio said he would not advocate for either side through his capacity as SGA president. However, he said he would not hold back his opinion as an individual.

Junior Kaitlin Logsdon, senator for the Roy H. Park School of Communications, expressed concern that it would be difficult for Recckio to separate his roles as both the SGA president, who would remain unbiased in the voting process, and an individual who has already said he has no confidence in Rochon.

James said the discussion was not a case of the SGA not having confidence in Recckio to have access to the results and be responsible with that information.

James said giving access to the results of the vote during the voting period to Downing is the best idea for making the vote as legitimate as possible because Downing only serves as the adviser to the SGA and didn’t vote on the no confidence bill.

Recckio said the questioning from the rest of the SGA about him having access to the results of the vote was a beneficial conversation.

“We need to allow the system we’re a part of to check and balance itself in ways, and I think tonight’s conversation was really positive toward that,” Recckio said.

Voting on the measure will continue until Nov. 30, when the SGA will announce the results as well as a breakdown of statistically significant data from the vote. The email sent out to all students said data collected from the Office of the Registrar will include participants’ school, major, race and gender. Recckio said the SGA will move its Nov. 30 meeting to Emerson Suites in anticipation of more people than usual showing up to the meeting.