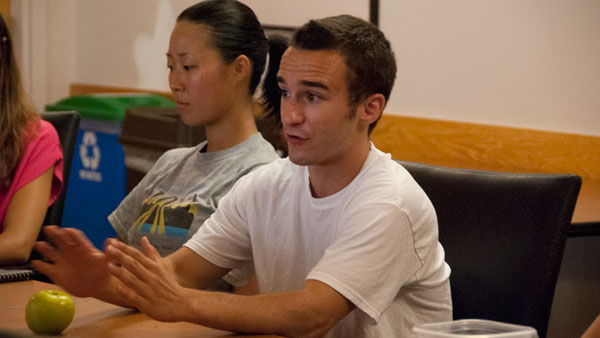 First up on the Student Government Association’s agenda this year is finding solutions to deal with the larger-than-expected Class of 2017. Academic probation and the summer 2014 limit on free printouts, as well as advocating for lower tuition, are also on the SGA’s radar.

The SGA held its first meeting of the year Monday and is also expected to meet with President Tom Rochon next week to discuss the direction of the college.

Senior Cedrick-Michael Simmons, president of the SGA, said he expects students will benefit from this year’s large incoming class, which was about 200 more students than the college originally projected enrolling in May.

“We as college students benefit by having extra students on campus, because that means additional revenue,” he said. “We are an institution that is 95 percent dependent on tuition. It definitely means that we have more opportunities to try to bring down the cost and make the college more affordable.”

Simmons also commended the changes made by the college to accommodate the extra students, such as the extended library hours.

The SGA will also prioritize the college’s decision to limit the number of free printouts for students beginning in summer 2014. The college made the decision because members of the campus community were printing too much paper and wasting it. College Librarian Lisabeth Chabot said about 143,000 sheets of paper were printed but never retrieved at the library in the last two academic semesters.

Last year, a project team including Information Technology Services and library staff, proposed the print-management system as a cost-cutting measure. The cost of printing black-and-white pages was proposed to be five cents for single-sided sheets and seven cents for double-sided.

“There were a lot mixed reactions on both sides; people who were for it because of the [number of pages being used], and there were people who were against it, because they are paying tuition and [say] there should be no limit on printing,” Recckio said.

The college is implementing campus-wide computer print management software to more accurately monitor the number of pages printed by users.

“It’s going to help us make that much more of an informed decision as to how to recommend changes to where the policy is being [implemented] next year,” he said.

“We officially pay for 18 credits a semester,” Somasinghe said. “But many students end up taking 15 to 16 credits. What we have seen is that you are essentially paying for something that you are not doing. You are talking about $2,000 to $3,000 that aren’t being used per semester. We are trying to establish a way to transfer that funding to summer programs and summer internships.”

Addressing structural changes within the SGA, Simmons said student senators will have new responsibilities to ensure senators are held accountable.

“Our No. 1, by far uncompromised No. 1 goal, is to help redefine what it means to be a senator,” he said. “That starts with outreach, so [that means] trying to come up with a structural way to hold each other accountable.”

Simmons said this year’s student senators are going to be attending a greater number of campus events than in past years.

Simmons also said the SGA aims to become more proactive regarding campus activities to create a stronger community and reach out to students who experience discrimination in the classroom.

“What I am most passionate about is how to establish a shared sense of a community of proper channels for students who have instances of bias in the classroom relating to race, gender, sexual orientation, class, religion, ability,” Simmons said.