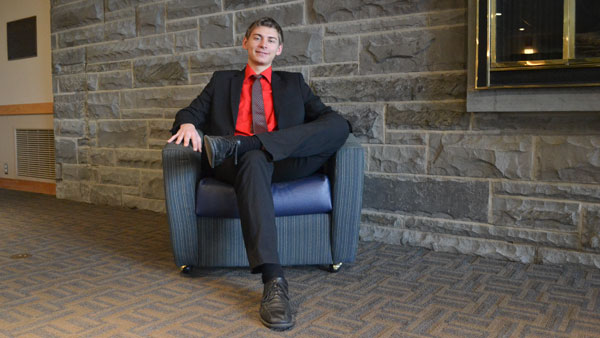 The Ithaca College Student Government Association has named freshman Marcell Fischler its international student senator. Fischler now fills the position that had been vacant since elections on Sept. 15 and 16 this semester.

The international student senator position was created when Rob Flaherty ’13, former SGA president, and senior Courtney Brown, former chief of staff, worked together in 2011. The seat came into effect in the 2012–13 academic year.

Isuru Somasinghe, SGA vice president of academic affairs, said like most new senate seats, the international student senator position was created to address a concern about the underrepresentation of a student group.

Fischler hails from Radfeld, Austria, and his first language is German. At the SGA meeting Oct. 28, Fischler said he wants to use his connections in Europe to create more international relationships between the college and universities around the world.

He said he envisions more exchange opportunities and more programs similar to the college’s London Center. Fischler also said he wants to address concerns about Wi-Fi connectivity on campus, fix laundry machines in residence halls and increase the number of international students at the college.

At the conclusion of the 2013 SGA elections, four seats remained unfilled, including that of the international student senator. When this happened, sophomore Dominick Recckio, SGA vice president of communications, spoke with potential candidates and nominated them to the SGA, and then members voted on them in a meeting after they were given an opportunity to speak.

During this semester’s election, Fischler ran for Class of 2017 senator but was not chosen. After discovering there were more positions open after elections, he contacted Recckio.

“He was one of the first ones, actually, that reached out to me after elections,” Recckio said.

While there were other students interested in the international student senator position, Fischler was the only one who met the deadline to meet with Recckio.

Freshman Anton Tikhomirov, who met Fischler through his Brazilian roommate, said he is glad that Fischler found his place in the SGA.

“He’s outgoing, he’s hardworking, so I think that he’s going to be effective at what he does,” Tikhomirov said.

Fischler said he was impressed by how well all of the members worked together at his first SGA meeting Oct. 28.

Senate chair Elijah Breton is responsible for educating members who are admitted after elections because they missed the SGA’s training retreat. Breton listens to their goals and potential initiatives and helps the new senators take their first steps.

Freshman Adam Carl said his roommate, Fischler, has the balanced personality needed for a successful journey.

“He can be very assertive when he needs to, but still personable, so he’ll be able to get things done when he wants to and represent the international community,” Carl said. “He’s very motivated to stand out in the community.”