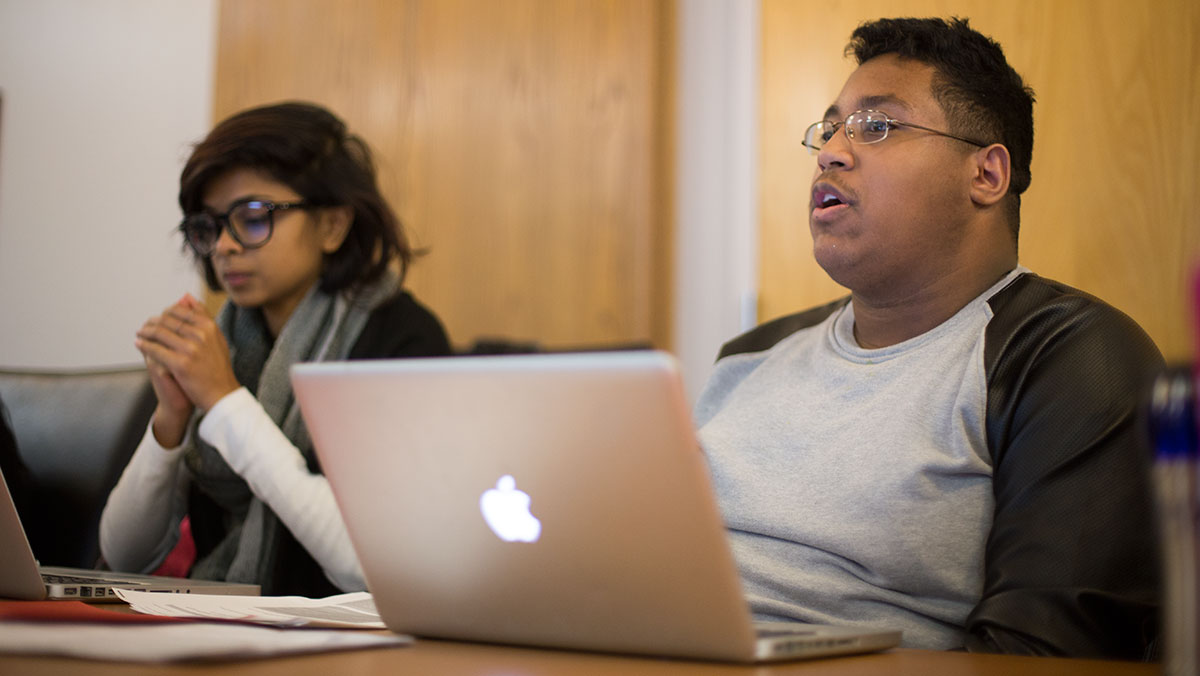 The Student Government Association unanimously passed two gender-inclusive policy bills at its Dec. 1 meeting: one to design an LGBTQ Studies minor and another to implement a gender-neutral housing option for as many residence halls as possible.

Ithaca College was ranked among the Top 50 LGBT-friendly campuses in the U.S. by Campus Pride this year, but Kyle James, SGA vice president of communications and sponsor of the LGBTQ Studies minor bill, said the college would still benefit from establishing the minor program.

“If we’re going to be a leader in LGBTQ topics, that needs to happen now,” James said. “Other colleges have majors, minors, grad programs in LGBTQ studies. IC doesn’t even have a minor. It makes no sense.”

James said the minor would require an intro course, capstone course and four or five other courses that pertain to the minor. So far, James has compiled a list of 40 to 50 courses that involve LGBT topics, many of which would fulfill the ICC diversity credit, he said.

Bruce Henderson, professor in the Department of Communications Studies, said he offered to make Queer Studies, WGST 22000, the intro course for the minor.

“Having a minor in queer studies is a way for the college … to teach that the lives and experiences of queer people matter,” Henderson said. “Having a minor allows students to have an extended, continuous exploration of the subject matter and it gives it a shape.”

Last semester, the Queer Studies course originally had 15 slots, which filled within 48 hours, Henderson said. After he decided to increase the seat capacity to 25, the course filled up again within another 48 hours with six additional students overriding into the course, Henderson said. He said the large class size required him to request a new room from the Office of the Registrar to not break fire code.

Another gender-inclusive action was the passing of the gender-neutral housing bill. The bill says students of opposite genders should be permitted to live together by ticking a checkbox in their online housing profile, Aaron Lipford, SGA vice president of campus affairs and co-sponsor of the bill, said.

Burns first introduced the bill to the Residence Hall Association, and then Lipford co-sponsored the bill when they proposed it to the SGA.

Currently, floors in the Terraces are coed and alternate gender by room. Upon implementing the bill through the Office of Residential Life, students of any gender could live together in one room even if the surrounding rooms are not gender-neutral.

The intention is for students to be able to have this option anywhere on campus, but the Quads and Towers may not be compatible because the male and female bathrooms are on opposite sides of each Quad residential hall, or different floors in the Towers, Burns said.

In 2008, students proposed a gender-neutral residence floor to Residential Life, but Lipford said it was not implemented. He said having only one gender-neutral floor would have isolated those students instead of being inclusive throughout campus residence halls.

As previously reported by The Ithacan on Sept. 12, 2013, Bonnie Prunty, director of residential life, said each year the program didn’t garner enough students willing to live on the specific floor.

“We had picked a location in the quads that we were going to offer as gender-neutral housing,” Prunty said. “We needed a certain number of returning students to be willing to select that as a housing option, knowing that fewer new students would probably be comfortable in that arrangement. We have new students who don’t even want to live in coed-by-door housing.”

One senator asked what might happen if a student did not feel comfortable living next to a gender-neutral room, to which SGA President Crystal Kayiza said inclusivity should be a priority.
“The point of ResLife is to have people of multiple identities living together in one hall,” Kayiza said.