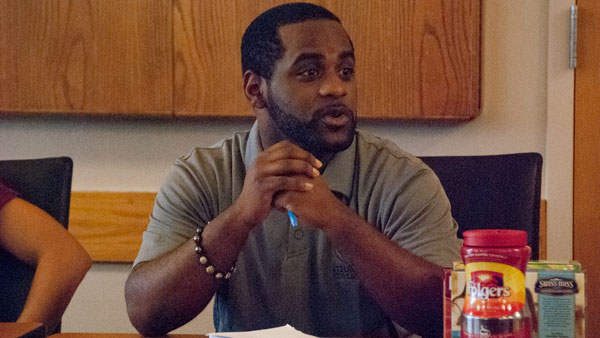 Amanda Den Hartog/The Ithacan
Senior Cedrick-Michael Simmons is the Student Government Association’s student body president for the 2013-14 academic year. He said one of his goals is to create open dialogue among members of the college community.
By Arlana Shikongo — Contributing Writer
Published: September 5, 2013

As senior Cedrick-Michael Simmons assumed his new role as president of the Ithaca College Student Government Association at the beginning of the semester, he laid out his goals for the coming year. Simmons said helping students feel more comfortable on campus and creating a more direct relationship between students and staff are on his to-do list.

Simmons said his goals include creating open dialogue with students, staff, faculty and administrators. He also said he aims to establish institutional guidelines that address intricate situations, such as issues in the classroom that are specifically targeted toward minority students.

Simmons said he will seek to shift the culture of the SGA to focus less on the government procedures associated with the group’s title and more on the student community.

“We can do more when it comes to being engaged in the community,” Simmons said. “We can do more with being present at events and meetings that we allocate funds to. We need a culture of service to the students.”

Through his coursework as a sociology major, Simmons said, he has learned about social justice elements that are important to address on campus. He said he looks to have an impact on organizations, institutions, countries, policies and systems as a whole instead of only the individual.

“This isn’t about just me as a person,” he said. “This is about what has been going on on a macro level.”

“Rob was very critical but informed when it came to advocating for the student voice, and so his passion was something I considered to be clear and made him approachable as a great resource to some of us younger folk,” Simmons said. “He is why I try to be clear about what I stand for and what I’m passionate about.”

Discussing other influences in his life, Simmons said growing up as a minority in the suburbs of Rochester, N.Y., played a crucial part in his decision to advocate for equality for minorities.

As the only African-American family with less financial stability than the Caucasian community he was surrounded by in his neighborhood, he was aware that in his high school he was not always afforded the same opportunities.

“I had to come to terms with the explicit and implicit racism that was occurring,” he said.

The new SGA president said he hopes to use these experiences to increase equality at the college. As the SGA’s mission is aimed specifically on policies and serving as liaisons between students and administrators, Simmons said he wants to make sure that the individuals who are part of minority groups are not forgotten.

Elijah Breton, senate chair of the SGA, described Simmons as a role model for minorities, a leader and someone who the people can go to when there is a problem.

“He’s a natural-born leader, and he’s hardworking and persistent in making sure that the goals and tasks at hand get started and finished,” Breton said. “He’s also someone who really likes to involve everyone, and those are just really great qualities of a leader.”

Freshman Parin Kaba, who attended convocation on Aug. 26, said she found the characteristics that Breton mentioned to be true after listening to Simmons’ convocation speech.

“He came across as someone that understood the position we’re in as freshmen, and the manner in which he addressed us was so easy and comfortable,” she said. “It really puts me at ease to have this feeling that the man representing the student body is someone I can comfortably address.”

“It’s about trying to have that confidence and trying to be critical, but also keeping that faith in the reality that systems do change, things do get better, and so it’s not a matter of if, it’s a matter of when, and for us it needs to be now,” Simmons said. “So, having that faith that all that we’re doing is not in vain keeps you positive.”

Breton said he is certain that Simmons will achieve his goals of tackling social justice issues and bringing the student and faculty communities into an open dialogue environment.

“He’s someone that can make positive strides and gains toward creating a diverse campus and help to better the campus as a whole,” Breton said. “I just hope he helps to build off of the success from last year’s senate and really builds off the strides that we made in terms of defining and shaping what a senator’s job is on campus.”