SGA pushes for campus inclusion and release of survey data 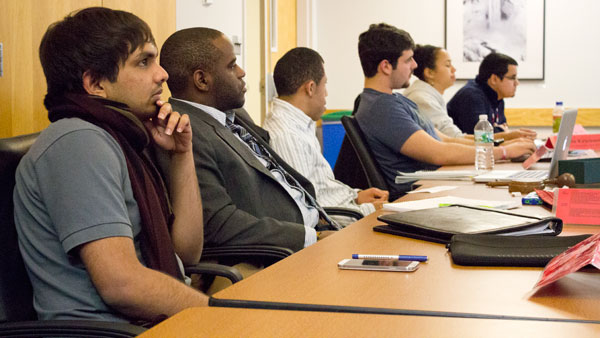 The Student Government Association has launched a task force to combat the marginalization of minority groups on campus and to create a more inclusive environment at Ithaca College. The task force intends to increase pressure on the administration to release the results of the Campus Acceptance, Inclusion and Fairness Survey administered in 2012.

The task force will raise awareness about microaggressions — subtle behaviors that stimulate exclusion and oppression. Microaggressions are insensitive jokes, phrases and assumptions that can be intentional or unintentional. An example would be saying that cooking is “women’s work.”

The executive board members said they have planned on addressing microaggressions since they were elected, but they stalled the launch of the task force while waiting for the results of the Campus Acceptance, Inclusion and Fairness Survey.

Students, faculty and staff were all invited to take the campus climate survey, as it is more commonly known. The goal of the survey was to “determine the quality of community with respect to acceptance, inclusion and fairness for all members of the community,” according to a document regarding the survey’s goals provided by Mark Coldren, associate vice president of human resources.

Coldren said the survey would help the administration better understand the campus climate and move toward improvement. Erickson said the survey results will provide important statistical backing to the SGA’s campaign.

The survey asked 28 questions, beginning with personal identification questions regarding sexuality, ethnicity and disability, among others. On a scale of “strongly agree” to “disagree,” participants evaluated statements, such as: “I feel isolated and marginalized at IC.”

Martha Gray, director of institutional research, said the number of college community members who completed the survey is not available at this time.

At the time of the survey’s distribution, Coldren told The Ithacan that the results had been expected to be released by Spring 2013, However, it is now two months into Spring 2014 and Coldren said data analysis still remains incomplete.

“You can’t communicate something to so many people expecting [the results] and then not give it to them,” Recckio said.

Senior Gillian DeRario, former senator-at-large, called the missed deadline a “public relations crisis” and said the college should have been more proactive about informing the campus about the delay.

President Tom Rochon declined to comment on the state of the campus climate survey.

Regardless of the statistical numbers, Simmons said, he has heard many student testimonies about experiencing microaggressions on campus, indicating that the college’s environment is not entirely inclusive.

Senior Arit Ntekim, president of the African Students Association, said she has experienced severe stereotyping and microagressions that have caused her to downplay her personality in an attempt to stop being judged by faculty and peers.

“I wouldn’t try and be the stereotypical aggressive black woman, so I’d be super quiet; I wouldn’t voice my opinion,” Ntekim said. “I was afraid that people would perceive me as that.”

After spending Fall 2013 having conversations with the administration about the survey, Simmons said it was time to change tactics.

A New Plan of Attack

The SGA is now approaching the issue of the unreleased survey with an activism-oriented strategy. Simmons launched an email campaign in which participants email Rochon and other administrators at least twice a day on the topic. Simmons is opening up the email campaign to all interested community members. Those who wish to participate can email Simmons at csimmon1@ithaca.edu.

Not long after the email campaign began, participants received a uniform response from Bailey Reagan ’12, assistant to the president.

“The survey is currently being analyzed by Institutional Research,” the email said. “Until the analysis is complete, the president and I ask that you continue to … do all you can to make Ithaca College an inclusive environment for all.”

DeRario said the automated response made her angry.

“The response was to quell and pacify people,” DeRario said. “It didn’t offer any sort of solution.”

Along with increasing pressure on the administration, Simmons’ bill called for the SGA to administer its own annual campus climate survey, as well as an alternative to the college’s antidiscrimination resource called “Eliminate Bias: Create a Community of Respect.” Simmons said he felt both the college’s survey and bias resource were flawed, and the SGA could improve them. He expects the SGA’s alternative campus climate survey to be administered mid-March.

Lastly, the bill resolved that the SGA give special thanks to staff and faculty who have been helpful resources to students struggling with marginalization.

The executive board, which is made up of predominantly African, Latino, Asian and Native American students, decided after elections that addressing diversity and inclusiveness would be a primary focus.

Erickson said at the outset, the executive board members all had different goals, but the issue of inclusiveness at the college held them together. She said she could sense the problems with inclusiveness from the first time she came to campus.

“I can’t deny the certain level of discomfort, and I was immediately aware of it the second I stood on campus,” Erickson said. “It’s like this unshakeable feeling that something is just not quite right.”

Of the goals the executive board set, Recckio said, the most important one to him was outreach — ensuring that students know the SGA is a resource available to them. He said though he supports the campaign, he is concerned the focus on inclusion will allow other important issues to be overlooked.

“If we’re representing the entire campus community, we should be putting equal [effort] into everything that people care about,” Recckio said.

Meyers said he is also concerned that focusing on a single issue would undermine a holistic approach to addressing all issues on campus.

“We also have to make sure senators are in a place where they’re balancing that with still addressing the day-to-day things they addressed last semester.”

Rather than trying to approach everything at once, DeRario said she believes addressing one issue at a time is more efficient because more resources are available to put into it.

Simmons said via email that if this initiative fails, he believes he will have failed as the SGA president.

Simmons said the SGA will soon be taking more actions to pressure the administration, including hanging posters, using social media and other methods he prefers not to make public yet.

To help spread awareness of the issue, Recckio said he plans to launch a video series that features students’ experiences with microaggressions at the college.

DeRario said she hopes this campaign will motivate the administration to take the student voice more seriously in the future.

“We do have a culture here of challenging authority and always fighting for what we believe is right, and I think that’s an important community aspect of this college,” DeRario said. “I encourage everyone to … never stop questioning.”

This article has been revised to reflect the following corrections. Correction, February 18, 2014: