Students for Sensible Drug Policy at Ithaca College is moving forward with its initiative to equalize disciplinary penalties for marijuana and alcohol possession after receiving support from the Student Government Association.

The initiative will address the judicial discrepancies between the two substances by requiring the same disciplinary and educational interventions for both infractions.

The penalty for marijuana possession is  currently more severe than that for underage alcohol possession.

Mike Leary, assistant director for judicial affairs, said the penalties for alcohol and marijuana possession and usage are consistent, but not definite until meetings with the student who committed the offense are conducted.

“There is some judgment used by all of our hearing officers and I think that it’s to the student’s advantage,” Leary said. “But what we normally do is, if a student is involved in a first time marijuana violation, is normally one semester probation and an online course called Marijuana 101 and then if there is a second marijuana violation, it would be probably a year of disciplinary probation.”
Leary said the first violation for underage alcohol possession is typically a written warning.

“We have another online course called Under the Influence which the student would take,” Leary said. “If it was a second time violation, it would be a semester disciplinary probation and an alcohol education seminar.”

Junior Rob Flaherty, vice president of communications for SGA, said that it was important for SGA to convey an accurate message to the student body about the penalties for marijuana and alcohol possession and use.

“Illegal use of drugs is the same no matter what,” Flaherty said. “We want to make sure that students are being treated fairly and equally throughout the process and I think that this is a step in the right direction.”

Though SSDP has received support from SGA, the process toward instating the initiative at the college is not complete.
Senior Evan Nison, president of SSDP, said the process toward approval is bureaucratic and the there is no set time frame for implementation.

“The route that it needs to take in order to pass is still a little unclear,” Nison said.

SSDP maintains that the consequences for both substances currently under the college’s policy are imbalanced.

Senior Ben Malakoff, public relations officer of SSDP, said the obvious disparity between the penalties for the two substances fosters the culture of alcohol use and stifles students from basing their decisions on health and social consequences.

Malakoff said the initiative intends to debunk the common misconception that underage drinking is much safer and more acceptable than marijuana use.

SSDP’s initiative is similar to the Safer Alternative For Enjoyable Recreation Campus Initiative, a national organization that educates the public on the relative harms of alcohol and marijuana by working with colleges to develop safe and rational policies for both substances.

Mason Tvert, executive director of SAFER, said he supports SSDP’s effort to enact its initiative. Tvert said he thinks the difference in the penalties for the two substances would influence students to drink because they do not want to suffer the strict penalties under school policy from using marijuana.

“In many colleges we see students facing expulsion or suspension or eviction from their dorm for using marijuana, in some cases on just the first offense,” he said. “With alcohol it’s just viewed by the university as a college student being a college student and they get a slap on the wrist and its not much of a problem.”

During SGA’s discussion of the SSDP initiative, senior Leana Testani, class of 2012 senator, said the SSDP policy sends a bad message to students that smoking marijuana is acceptable.

Though SAFER actively informs students marijuana is a safer substance, Malakoff said this particular policy is not encouraging the use of marijuana, as opposed alcohol, among students.

“We do believe that it is a safer substance, but this is purely aimed to changing how its handled judicially in order to create a safer campus atmosphere,” he said.

Through an online survey of 200 students at the college, SSDP found that 90 percent perceived alcohol to be more harmful in the college environment and 81 percent believe the college’s judicial system treats marijuana more severely. 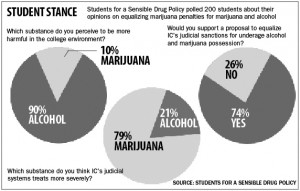 Nison said he hopes the policy is passed and implemented by next year. If passed, the policy will have a two-year trial period to assess the effectiveness of the program.

“We have facts and science on our side,” Nison said. “In terms of if this will ultimately have a positive effect on the student body at Ithaca College, it would be hard to argue against it.”