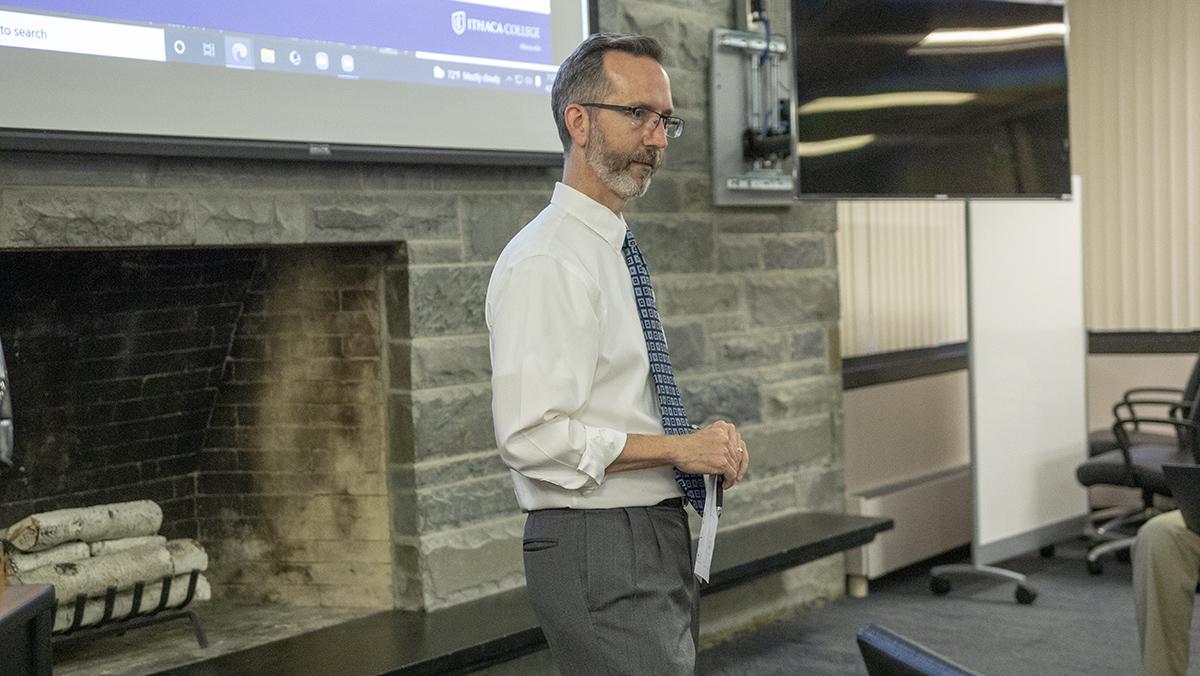 Downs began his work at the college in August 2021, after Bill Guerrero left the college in Feb. 2021. Guerrero’s departure occurred after the COVID-19 pandemic had accelerated the college’s financial crisis. Declining enrollment and retention rates have led the college to rethink its financial system and put a higher emphasis on income diversity as means to prevent tuition hikes.

At the April 25 meeting, Downs gave a five-slide presentation to the SGC on the financial situation of the college. Downs said that when making the presentation, he had hoped to give members of the SGC a consumable way to understand where the college was at financially.

“The questions [I get] are very common to what I get all the time,” Downs said. “Hopefully what I can do is help demystify a little bit of that … My job is to try and take something very complicated and make it so it’s digestible.”

Downs began by explaining how the pandemic affected enrollment. The first full academic year of the pandemic — 2020–21 — saw the college’s freshman class dip below 1,000 students for the first time in years. Downs said that the college will continue to see declining class numbers and that many other colleges have seen decreases in enrollment due to the pandemic. By January 2022, one million less students were enrolled in college in the United States than before the pandemic, according to NPR.

“We know for the next two years we’re going to dip down before the enrollment starts to come up,” Downs said. “But what we’re really trying to figure out as well as higher education is what happens beyond that. What are student behaviors? What are the college education needs of families? That’s where we’re looking for the next few years.”

Downs said his approach to divestment from fossil fuels aims to be as strategic as possible.

“The goal is not to say, get rid of anyone who’s investing in fossil fuels,” Downs said. “There are a lot of companies in fossil fuel that are making investments in renewables. That, to me, is very important when we want to divest.”

“We are in really good shape,” Downs said. “I will tell you — I’m going to watch out over the next few years because as our operating budget goes down, we’re going to look at our metrics to make sure [that if] we are going into debt, does borrowing hurt us?”

However, the accuracy of credit ratings from Moody’s are to be questioned. In 2017, Moody’s paid a $864 million penalty to the United States Department of Justice for knowingly giving high credit ratings to risky securities in the lead up to the 2008 financial crisis. Downs also said the college is a customer of Moody’s loan department. This could be a conflict of interest for Moody’s and an issue for the college, as it is purchasing both credit ratings and loans from the same company.

Freshman Noah Richardson, legal studies major and Class of 2025 senator, asked Downs about how different majors will be affected by oncoming financial changes. Richardson said students in majors with lower registration rates are concerned their major might be more impacted financially compared to majors with more students.

“I have a lot of friends who are not a part of what they would call the popular majors at this college,” Richardson said. “The student perception — especially with the freshmen — is that there is a little bit of a bias and that the majors in physical therapy and communications and basically everything that’s in Park. Whatever Ithaca is basically known for [becomes] the golden goose of the college.”

Downs said that regardless of actual bias, student perception needs to be addressed.

“I appreciate that because whether it’s right or wrong, it doesn’t matter, that’s the perception,” Downs said. “We can either help correct that perception or if there is a bias [in favor of larger majors] we can help make sure it gets sanitized … That being said, what I will say is the programs that are growing are going to get the resources. That’s just the reality … we have to be invested in those areas that are growing.”