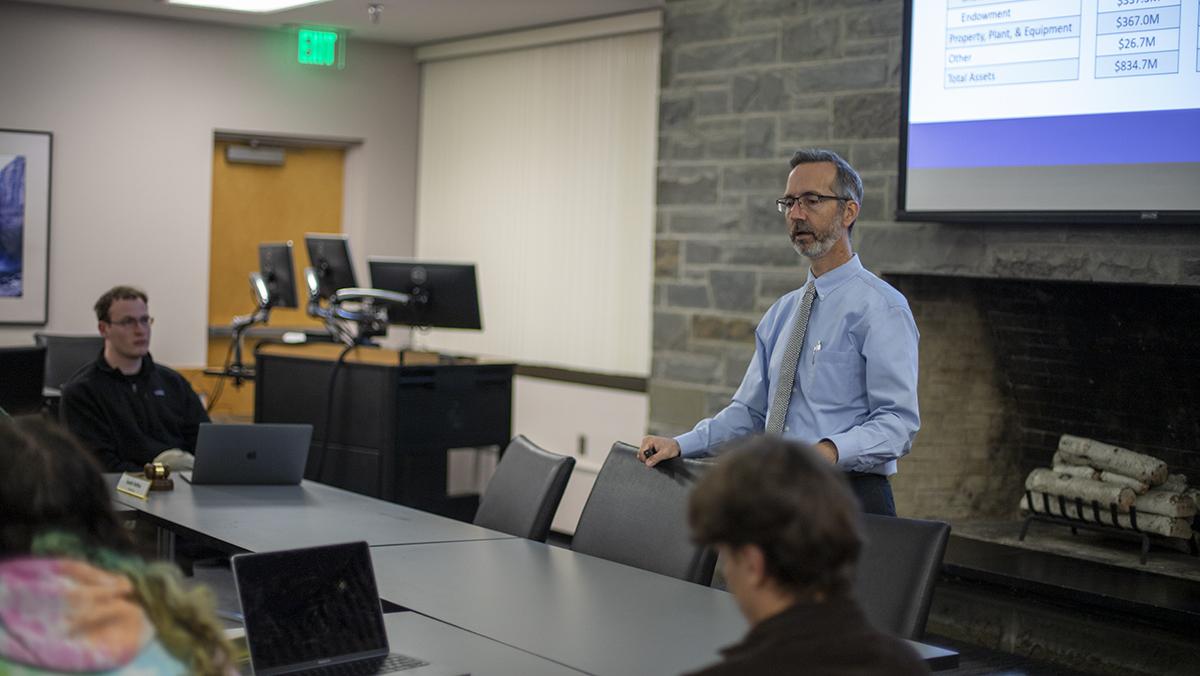 At the Oct. 17 meeting of the Ithaca College Student Governance Council (SGC), the senate confirmed two senators to the executive board and spoke with Tim Downs, vice president of Finance and Administration and chief financial officer.

During his presentation, Sen said that if confirmed he plans to improve the health and well–being of students by focusing on dining options, student accessibility and increasing Hammond Health Center operational hours to be open more on weekends.

“I know I have a lot to learn, but I hope to collaborate with you, learn from you and hopefully co-sponsor many bills,” Sen said.

In Viggiani’s presentation to the senate, he spoke on his previous experience, as he is a returning senator in the SGC, serves on the Mental Health and Wellness Committee and has a minor in communications. Viggiani said he hopes to continue the Fill the Senate campaign started last year by James Zampetti — former vice president of communications who transfered from Ithaca College — and make the SGC more well-known on campus.

“I want to continue [the Fill the Senate campaign] because we have a ton of people,” Viggiani said. “More than half of you weren’t here last year. This is the biggest it’s been in my time here, since I’ve been on SGC, and I’d like to see it get even bigger.”

The guest speaker presentation was delivered by Downs, who showed the senate several graphs and charts providing data on the college’s past financial records and where the Division of Finance and Administration predicts the numbers will move in the future. The data included enrollment statistics as well as where different funds like revenue and endowments were coming from.

“In [the 2018–19 academic year], the college implemented a strategic plan,” Downs said. “We thought we had many years to do that in the first of five years. But when COVID hit, we kind of had to implement that in about a year and a half, and very quickly. We went a little less strategic and more tactical to get there.”

Downs said that the Division of Finance and Administration worked quickly to execute their five-year plan while still attempting to be strategic in order to limit the impact on the student experience. He said the college is seeing growth in endowments, which are investments set for a specific purpose that are intended to last a long time.

“This is an intergenerational asset that has to continue on with the life of the institution,” Downs said. “The college is really on solid footing. I sleep well at night knowing that we have strong working capital, we have a strong endowment that we can allow to grow back to where it was at the end of [20]21 and not have to dip into that as we weather the next few years of low enrollment until the COVID class and the next year graduate.”

Sophomore Hannah Ahmed, Class of 2025 senator, gave a report to the senate that she has been working on the Appropriations Committee and is hoping to make the African Latino Society Lounge in West Tower more accessible to students of color as a safe space on campus. The space is currently being used as an office space for student organizations and an event space for the Center for Inclusion, Diversity, Equity, and Social Change.

“I want to make it a space for POC because there’s not that many spaces that we have that we can go to and just feel safe and comfortable,” Ahmed said.

Senior Grace Madeya, president of the student body, said the SGC will be hosting an event Nov. 12 in Emerson Suites for students not attending the Cortaca Jug Game in person at Yankee Stadium. The event will be free to students and include games and food. Madeya said she is looking for senator volunteers who will not be attending the game in person. A similar watch party event was held in 2019 when the Cortaca Jug Game was held at the MetLife Stadium, but it was hosted by student organizations.

Senior Tessa Kurtz, vice president of academic affairs, said she is working with the Mental Health and Wellness Committee to encourage students to fill out a survey on their personal mental wellbeing at the college that will be sent to Michelle Goode, program director for the Center for Counseling, Health and Wellness, to gather student opinion and improve campus resources.