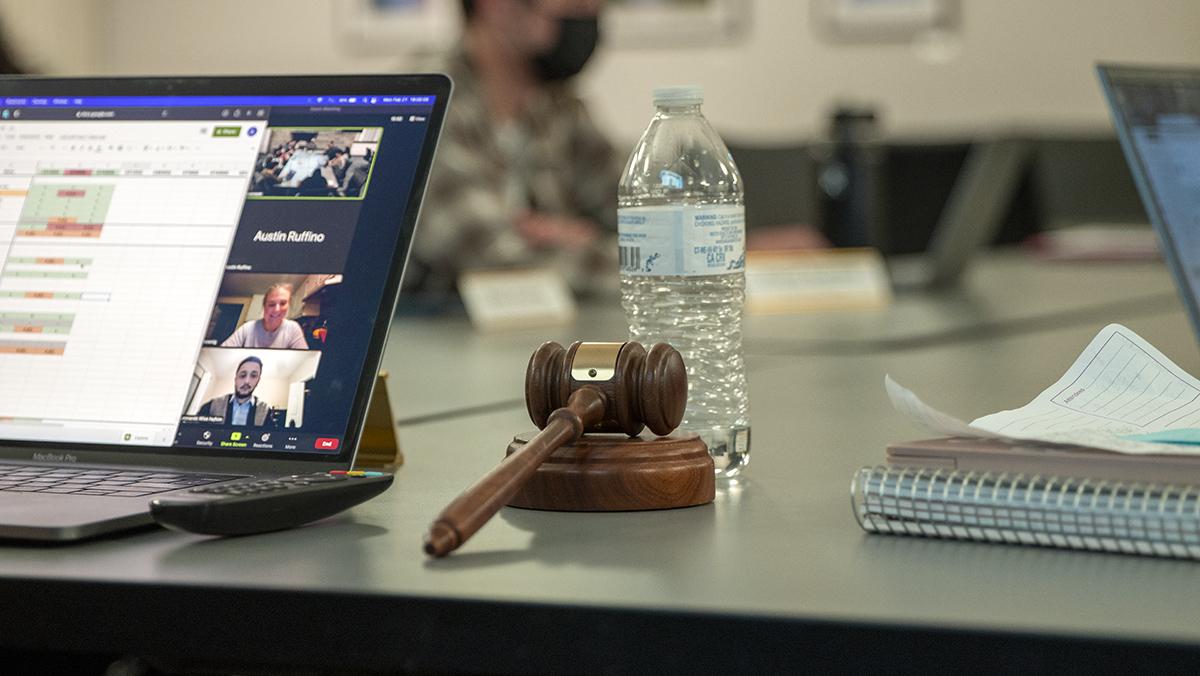 Alyssa Beebe/The Ithacan
At the SGC’s meeting it talked with Linda Koenig, Title IX coordinator, and Leonardo Wise, Title IX investigator and prevention specialist, about some of the nuances of the legal process.
By Lorien Tyne — Assistant News Editor
Published: February 23, 2022

At its Feb. 21 meeting the Student Governance Council (SGC) spoke with representatives from Ithaca College’s Title IX Office about resources and the process cases go through.

At the SGC’s meeting it talked with Linda Koenig, Title IX coordinator, and Leonardo Wise, Title IX investigator and prevention specialist, about some of the nuances of the legal process.

Koenig explained some of the basic processes following a report to the office. She said all students that go through the intake process are introduced to campus resources like the Center for Counseling and Psychiatric Services (CAPS) and the LGBT Center. After a report, common accommodations for the parties involved often include seating, housing and safety arrangements.

In response to a question proposed by junior SGC senate chair Austin Ruffino, Koenig explained that the office does not follow up with survivors after the legal case is concluded.

“When you’re trauma informed, we try not to engage the parties,” Koenig said. “In an effort to not remind or retrigger. … Our office is open if there’s an ongoing need for case management.”

Senior Leticia Guibunda, vice president of campus affairs, brought up the concern of academic flexibility in accommodations that are available to students during the legal process of Title IX.

“Regarding the interim period accommodations … I was wondering how flexible is the school in providing those accommodations in a way that doesn’t harm the student’s progress?” Guibunda said.

Koenig said the flexibility of accommodations rely heavily on what is available.

“What we do is we work with a faculty member and we come up with a plan based on some direction of the person who’s requesting the interim measure,” Koenig said. “What I have experienced in this position is that faculty are really interested in being supportive and helping a student be successful while they’re managing a difficult process. But I don’t have the exact answer because they [survivors] really just need space.”

Two senators reported on current initiatives and goals for Spring 2022. Junior Tessa Kurtz, senator for the School of Health Sciences and Human Performance, mentioned several current efforts. She said she is collaborating with SGC’s Social Justice and Sustainability Committee on the Identity for Bathroom bill — which is a call for more gender-neutral bathrooms on campus.

Freshman Vincent Tavernese, senator for the School of Music, said that after the college reported two swastikas had been found in the School of Music, he spoke with the school’s interim dean, Ivy Walz, as well as Erik Kibelsbeck, concerts and facilities manager, and Bill Kerry, executive director in the Department of Public Safety and Emergency Management, to talk about the feasibility of security cameras.

Tavernese also mentioned working with Musicians for Mental Awareness Club on the accessibility of food for music students. He spoke about plans to have a nutritionist come into the school to engage students in the food side of mental health and encourage better relationships with food.

“A lot of musicians choose to practice instead of eat, especially since there’s a limited amount of resources in Whalen to get food,” Tavernese said.

During the meeting Ruffino announced that Chick-N-Bap will be open from 7–10 p.m. on Thursdays starting Feb. 24. He said the announcement came from David Prunty, executive director in the Office of Auxiliary Services. Ruffino said this is another of the college’s efforts to get back to a normally operating campus.

Guibunda brought the council’s attention to the college’s outdated websites and reported she had begun reaching out to different offices to have their website updated. She said when SGC was attempting to contact the Title IX Office to invite it as guest speakers, the contact information for the Title IX coordinator was incorrect.

“If you guys run across any resources that are outdated or like wrong, people, please feel free to either reach out to them [the offices] or let me know and I can also reach out to try to update those resources for students,” Guibunda said.

Sophomore James Zampetti, vice president of communications, said via email that SGC is the sole representative body for the Ithaca College student community.

“SGC works with the student community to implement change on campus and improve student life,” Zampetti said via email. “SGC is always looking for student feedback, please don’t hesitate to contact us at sgc@ithaca.edu. You can also find more information about us at https://www.ithaca.edu/student-governance-council.”