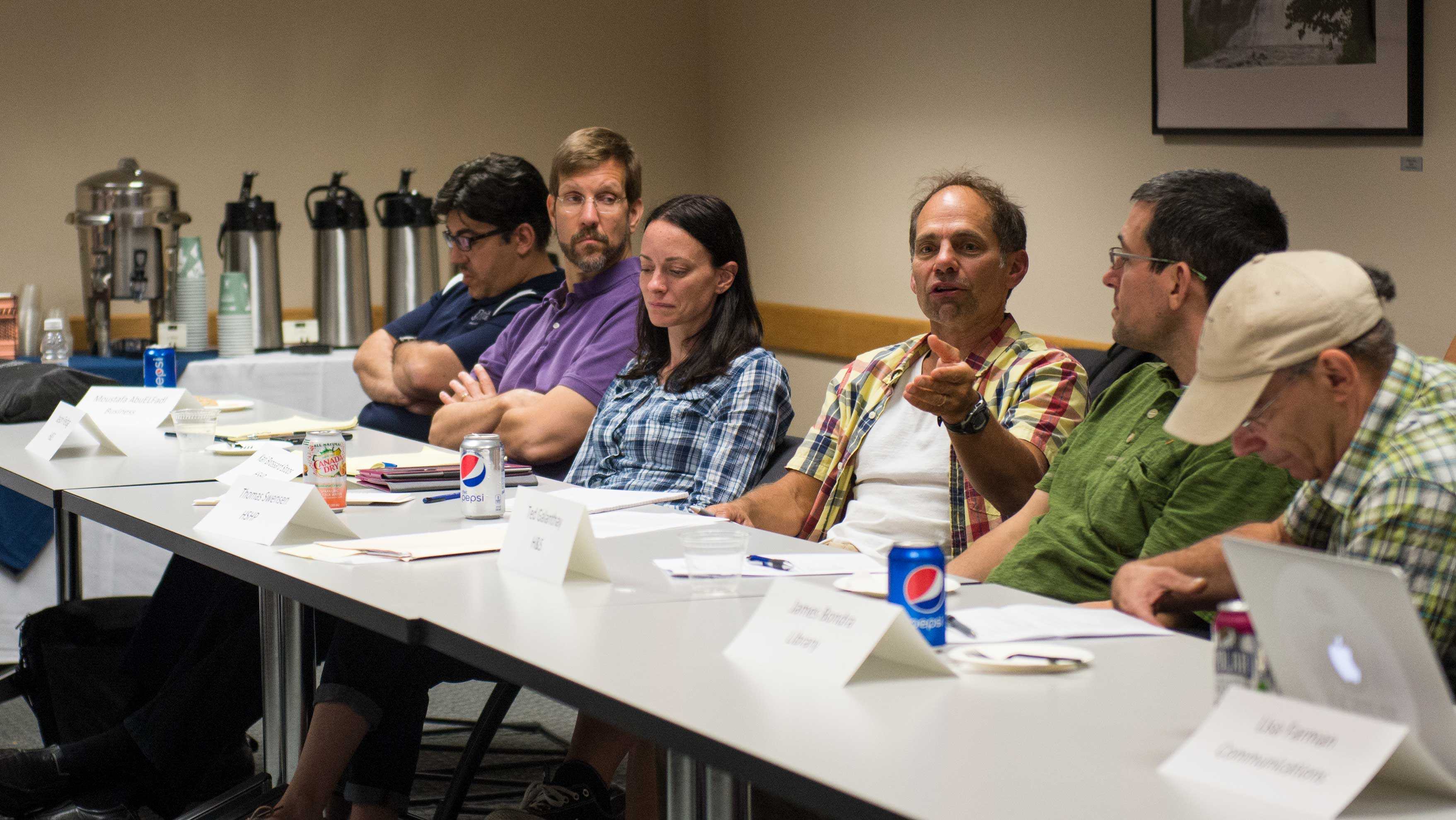 Samantha Fuller/The Ithacan
Pictured fourth from left, Tom Swenson, chairman of Faculty Council, said he has concerns with the proposed shared governance draft sent out to the campus community in an email Oct. 24.
By Nicole Pimental — Contributing writer
Published: October 26, 2016

The draft proposal for a shared governance structure at Ithaca College was released to the campus community for review in an email Oct. 24.

The Shared Governance Task Force, according to the email, will be meeting through Nov. 11 with constituent groups, including the Staff Council, the Student Governance Council, the Administrative Assembly and the Faculty Council, to receive feedback on the draft. The task force will be having open feedback sessions from 10 a.m. to 11 a.m. Oct. 27 and from noon to 1 p.m. Nov. 3, both in Textor 102.

The draft primarily outlines the formation of the college’s Governance Council, which would include four faculty members, three students, three staff members, the provost and the vice president for finance and administration. It would be created to serve as an additional step in the process of passing proposals, which would be received from the Staff Council, the Faculty Council, Administrative Council and the Student Governance Council, before they go to the President’s Council to be ratified, according to the draft.

The CGC defines shared governance in the draft as “a set of processes and practices that distribute responsibility for creating and approving policy, setting strategic agendas, and recommending institutional changes.” The draft also defined the roles of committees, councils and task forces at the college and explained how proposals will be received by the CGC.

Tom Swensen, professor in the Department of Exercise and Sport Sciences and chair of the Faculty Council, said the draft is a “modest addition” to the college’s governance structure.

According to the feedback that he has received from many other faculty members, Swensen said, the draft is missing steps, clarity and a feedback loop for proposals that come down from the President’s Council.

“The most glaring shortcomings were that there didn’t seem to be any sharing with the decisions that are made at the top,” Swensen said.

From what he has collectively heard from other faculty members, Swensen said, he believes the addition of more voices on the President’s Council to represent students, faculty and staff could improve this draft. The president, vice presidents, and the assistant vice president for community and government relations currently sit on this council, according to the college policy manual.

“People see it as modest at best,” Swensen said. “There’s maybe just some disappointment. People are hopeful for a change.”

Marieme Foote, president of the Student Governance Council, said she believes the task force has created a draft that its members are all comfortable with. The draft is a step in the right direction, she said, in terms of finding equitable governance that shares power in decision–making.

“I really hope it bridges all the constituencies together to make really important decisions on campus,” she said. “It is a really big deal.”

Foote said she did have her own criticisms of the draft, but that she would not voice them until hearing further feedback from the community.