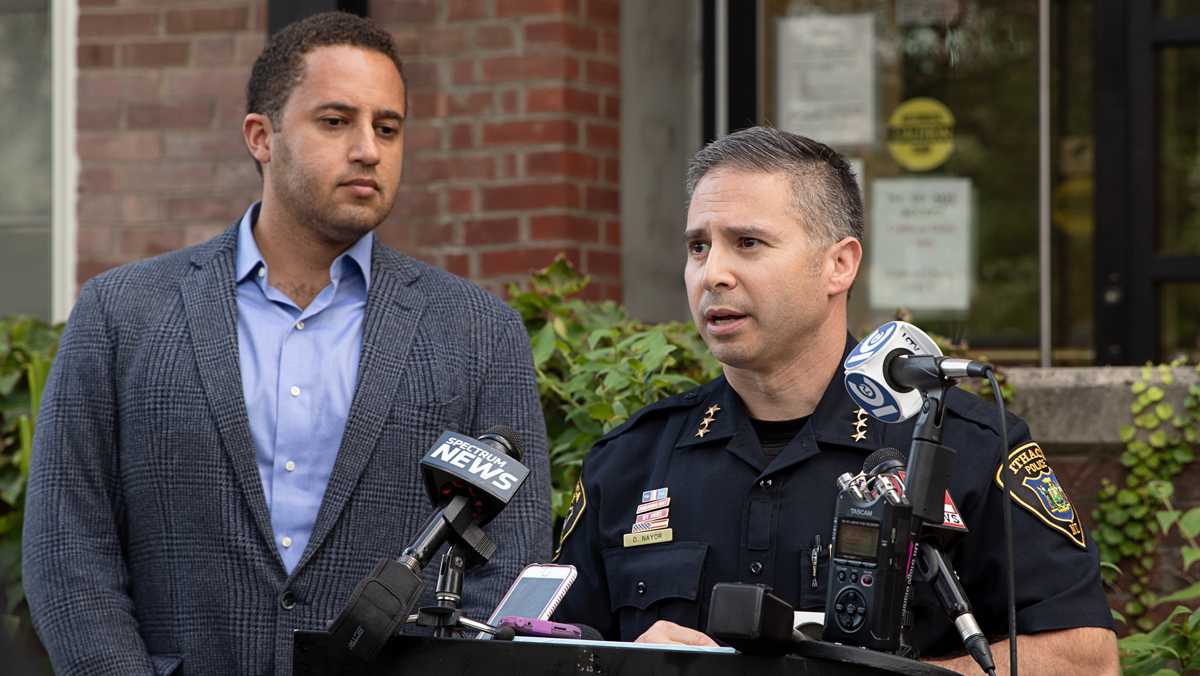 A victim has been identified and one man is in custody after a shooting occurred the morning of Sept. 4 on Green Street near The Commons.

The Ithaca Police Department has one man in custody who has been identified as Woodrow Turner of Ithaca. Dennis Nayor, acting chief of the IPD, said Turner is not believed to be the alleged shooter, but he allegedly was an accomplice to the crime. Police said he was found trying to dispose of the .357 caliber revolver.

Vincent Monticello, IPD’s deputy chief of operations, identified the primary suspect in the investigation as 33-year-old Andrae Martin of Ithaca.

“We are still trying to locate him, but we have some pretty solid information that we are working with right now,” Monticello said at a press conference Sept. 4.

Monticello said Turner will be charged with criminal possession of a weapon in the second degree and tampering with evidence.

The victim of the shooting was identified as 30-year-old Shane Lott of Rochester, New York. Bangs Ambulance arrived on the scene and treated Lott for multiple wounds before he was stabilized and transported to Cayuga Medical Center. From there, he was transferred to a trauma center. He has since undergone surgery and is currently in the intensive care unit at the trauma center, Nayor said.

Nayor said the police could not comment on a potential motive for the shooting at the moment because the investigation is ongoing.

Police received multiple calls about a shooting at 9:44 a.m. Sept. 4 near the Green Street parking garage right off The Commons. Police said five shots were fired at the scene. IPD, the Tompkins County Sheriff’s Office, state police and the FBI responded to the call and are all still currently assisting with the investigation. Officials worked to collect eyewitness statements from individuals present at the scene who were waiting to board a bus to New York City at the Green Street bus stop.

Ithaca College released a notification informing the campus community of the shooting through its Emergency Notification System. The message outlined the situation and encouraged anyone who has information to contact the IPD.

Mayor Svante Myrick tweeted about the shooting the morning of Sept. 4, urging anyone in the vicinity to remain away from the area.

At the Sept. 4 press conference, Myrick said he applauded the response of the IPD, along with the help of state police, the sheriff’s office and the FBI.

Myrick said he was able to see the response unfold because he was in a meeting with Nayor when police received calls about the shooting.

“I saw how fast, how professional, how excellent our police department was in real time,” Myrick said.

Nayor said a press release will be sent out soon containing information and a photo of the alleged suspect at large.

The Green Street parking garage will be reopened as soon as the investigation at the crime scene is finished, Nayor said.

Myrick encouraged anyone in the community feeling affected by this incident to use the resources available, like calling the 211 Tompkins/Cortland Help-line to talk about the incident.

“It became clear today that when something like this happens, there is more than one victim,” Myrick said. “Everybody in the vicinity and everybody who is coming to downtown Ithaca is feeling a little traumatized right now.”