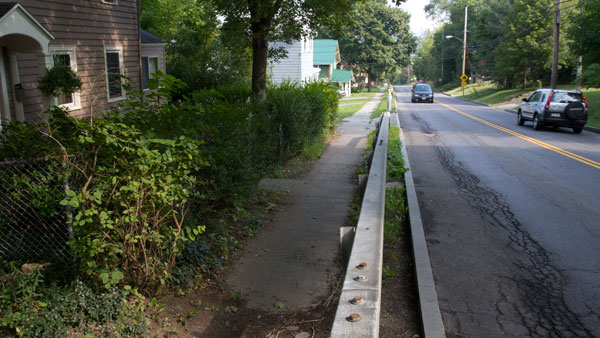 Tuck Mitchell/The Ithacan
Under the new policy, which was approved by the Common Council this month, the city will be divided into Sidewalk Improvement Districts responsible for collecting annual fees from residents.
By Kayla Dwyer — Contributing Writer
Published: September 11, 2013

A new sidewalk policy aimed at lessening Ithaca homeowners’ responsibility for damages to sidewalks was approved by the Common Council of the City of Ithaca on Sept. 4.

The new plan divides the city into five Sidewalk Improvement Districts, each of which is responsible for collecting annual maintenance fees from all property owners. The collections will then be allocated to repairing damages to sidewalks in each SID.

The policy is expected to be implemented on Jan. 1, 2014, City Attorney Aaron Lavine said.

Single- and double-family residences will pay an annual fee of $70, while all others, such as apartment complexes and businesses, will pay a baseline fee of $140 with additional frontage and square footage fees. Frontage fees are decided by the length of the plot of land along the road, while square footage fees are determined by the area of the plot.

Ray Benjamin, assistant superintendent of Public Works in the Department of Streets and Facilities, said his office will work with a representative from each sidewalk district to develop one work plan per district. Each detailed plan will include blocks that should be prioritized as well as recommended repairs. The work plans will then be taken to the Board of Public Works for approval.

Currently, individual property owners are responsible for hiring private contractors for repairs as needed. Benjamin said the board often receives complaints of billing discrepancies and negotiations handled by individual citizens and contractors.

Under the new policy, there will be one public benefit per district, which will fund one sidewalk crew to carry out work detailed in the work plans.

“We’re not discussing who is paying for it,” Benjamin said. “It’s already covered.”

He said the city hopes this plan will be more efficient, covering more areas of need than ever before.

“This is a first time through for us,” Benjamin said. “We hope we’ll be able to get a lot more done, but we’re not going to be able to catch up on everything.”

Govind Acharya, a senior research analyst at Ithaca College, was on the original Sidewalk Task Force created by Mayor Myrick in February to develop this new proposal.

Acharya said he does not expect the new policy to have a significant impact on rent, which he said already includes sidewalk repair costs.

“I would imagine that the average student who is a renter really wouldn’t see any impact except when the sidewalks get built,” he said.

He also said under this new policy, the city would have the resources to construct a sidewalk along the college entrance that connects Coddington and Hudson streets, a benefit to the students who live off campus.

Individual homeowners will also have a lighter burden with the new sidewalk plan. Nancy Ramage, former professor of art history at the college, said she is happy with the policy changes because of the unexpected charge she received for damage to her sidewalk earlier this year.

“We just had to pay about $1,000 for some absolutely tiny, hairline cracks in our driveway … which we thought was totally unnecessary,” she said. “But we don’t get a vote, we don’t get a say whether we think it is.”

Wade Wykstra, former Board of Public Works member and 2011 mayoral candidate, said conflicting opinions about the policy may be the result of bad communication between the government and Ithaca locals.

According to state law, citizens may approach the council during public hearings and speak for three minutes on an issue at hand. Wykstra questions whether citizens are aware of their right to comment, and whether the resulting one-sided discussions allow for genuine back-and-forth dialogue. He said it would have been better to wait a month before passing the policy and encourage more public debate.

That is not to say that Wykstra contests the new policy itself.

“I’m not against it,” Wykstra said. “It just might have helped to specifically invite people to the table and get everyone on board.”

Wykstra said the Landlords’ Association, local churches and large businesses should have been invited to discuss the decision further.

“Give them a chance to do more than have three minutes to talk at the Common Council,” he said.