Some student voters decide to register in Tompkins County 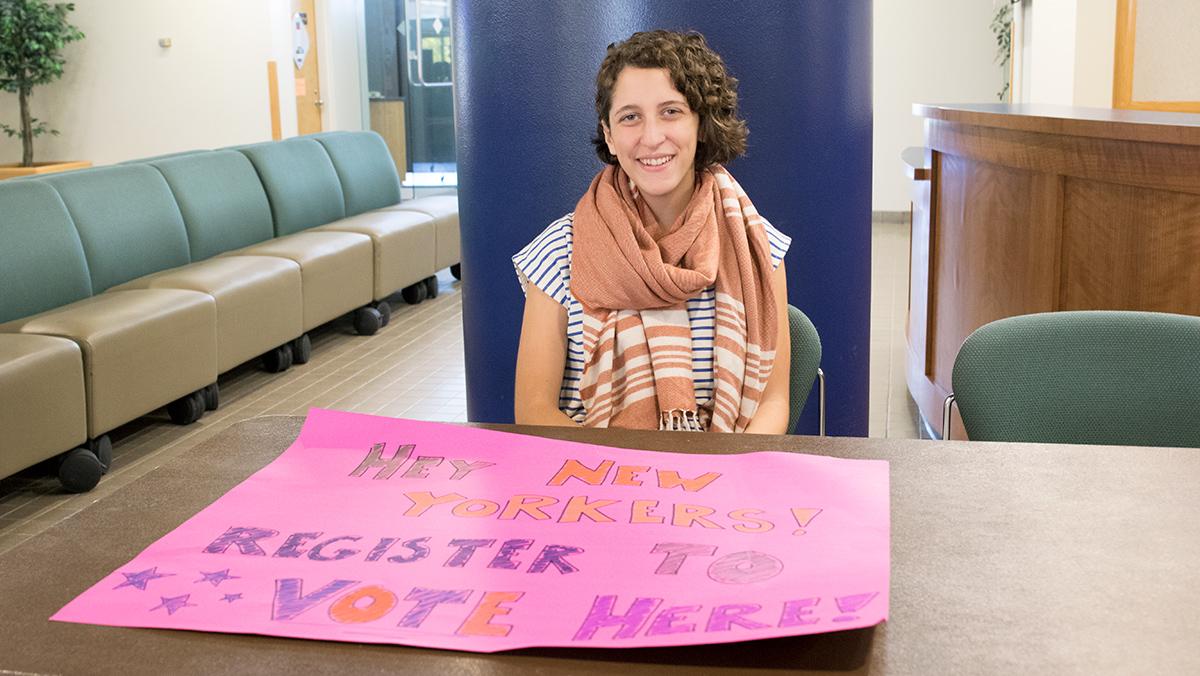 As the presidential election approaches, a small percentage of Ithaca College students have decided to take an alternative approach to the absentee ballot — registering to vote in Tompkins County.

In total, there are 1,031 voters ages 22 and younger registered in Tompkins County who live on and around the college campus, said Steve DeWitt, the Tompkins County Democratic Commissioner of Elections. This includes Circle Apartments, but the area also encompasses Longview Nursing home and the streets nearby the campus, DeWitt said. He said there are around 400 registered students who live on the college’s campus, which equates to about 6 percent of the student population.

Comparably, DeWitt said there are nearly 900 people registered to vote in Tompkins County who live on Cornell University’s campus. This equates to about 4 percent of its student body.

Some students, like junior Lauren Ruth, chose to register in Tompkins County to vote in elections for the sake of ease. She said she thinks it is more accommodating to register somewhere she lives for most of the year rather than deal with sending in an absentee voter form.

“That way you don’t have to worry about the stress of mailing in a form, you can just go and vote,” Ruth said.

She also said it is more of an experience to vote in person and that it makes the process more exciting.

Students are considered residents of the state their school is in by the United States Census Bureau because they live on campus from nine to 12 months of the year. They can legally register in their college’s district to vote, according to a document created by The League of Women Voters of New York State about what voting rights college students have.

Mike Burns, the national director of Campus Vote Project, an organization that informs students about how to vote, said that in some cases when students are registered in the state they go to college in, there is a higher voter turnout among those college students. However, this data includes community college students, the vast majority of whom permanently live in the same state as their college.

Campus Vote Project also gives a state-by-state breakdown of how voting works specifically to help college students navigate the voting process in the state they claim residence in.

But college voters who are not registered to vote in Tompkins County can choose to fill out an absentee ballot and send it back to their home voting stations.

Freshman Nadia Racaniello said she thinks using an absentee ballot is an easy process and is accessible to many students.

“It’s pretty self-explanatory,” Racaniello said. “On the website you can choose several different languages, so it’s pretty easily accessible to everyone.”

Some students, like freshman Robert Melikyan who lives in Stone Ridge, New York, prefer to drive home to vote. He said simply going home helps him stay away from the confusion that often occurs while trying to send absentee ballots in.

“It’s not easy, but it’s a really important election to me,” Melikyan said. For Melikyan and many students, this November election is the first they will be voting in.

Even though absentee ballots seem to be the most popular voting strategy among students at the college, many students said it is a confusing process. Sophomore Paige Winn said she has used absentee ballots to vote in the past, but she said when she tried to send in her ballot during the primary election, she still did not get it in on time to be counted because she was unclear about how far before the voting date she had to turn it in.

“It was easy, but at the same time … It just doesn’t make that much sense to me. It’s just not practical,” Winn said.

Senior Catherine Proulx, president of IC Progressives, is working with the Student Governance Council to get students registered to vote.

“We have voter registration drives,” said Proulx. “At certain events, we will have people helping register people to vote.”

Recently, club members attended the debate-watching party hosted by IC Republicans on Oct. 9, and a reading given by Kiese Laymon, an American author and professor at the University of Mississippi and a part of the Distinguished Visiting Writer series, on Oct. 10.

The college also provides students with resources to help them understand how, where and when to vote. Doreen Hettich-Atkins, coordinator of Special Services and Programs for the Division of Student Affairs and Campus Life, said she provides voter registration applications for students. The college also provides information on its website about voter eligibility and local elections, and the website has a list of election links to registration and absentee ballot information for every state, Hettich-Atkins said.

Commentary: Why I am not voting for Bernie Sanders