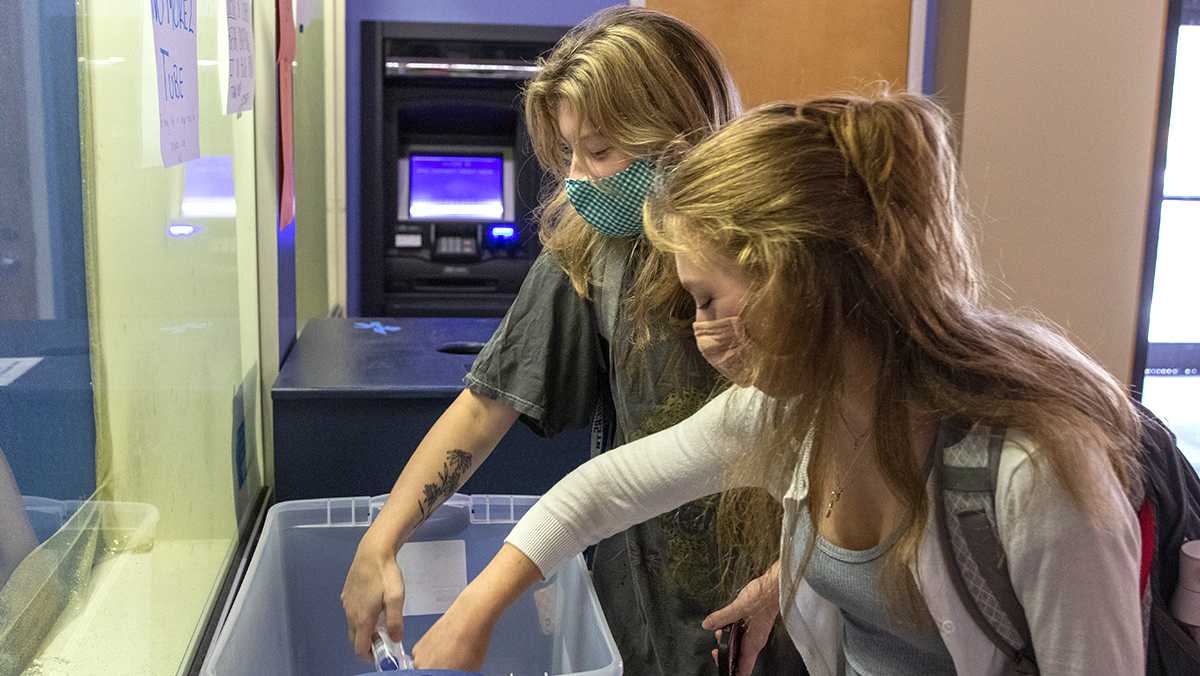 Thomas Kerrigan/The Ithacan
In an email to the campus community Sept. 3, the college announced that random individuals will be selected to participate in newly-reimplemented surveillance testing. Students who are selected to test each week receive an email on Monday morning and have the option to submit a test Monday, Tuesday, Wednesday or Thursday.
By Nathan Moone — Contributing Writer
Published: September 22, 2021

Some Ithaca College students have voiced their disappointment with the lack of clear communication from the college as it has reimplemented surveillance testing for vaccinated students.

With some classes turning to online learning, there have been multiple instances in which students and faculty said they feel the COVID-19 guidelines are not being properly enforced and followed. In an email to the campus community Sept. 3, the college announced that random individuals will be selected to participate in newly-reimplemented surveillance testing. Students who are selected to test each week receive an email on Monday morning and have the option to submit a test Monday, Tuesday, Wednesday or Thursday. Saliva self-collection testing kits are being used to conduct this surveillance testing, which were used in the spring semester as well. Unlike in spring, the randomized testing is not mandatory, even for those selected to test during the week. Samm Swarts, assistant director for emergency preparedness and response, said in an interview with The Ithacan that the surveillance testing is not mandatory because there is not currently a necessity.

Freshman Keely Crane said she primarily agreed with the randomized testing and thought it was a good step for the college, although she thought there was still room for improvement.

“When I got the email for the first time I thought it was honestly a good idea because I feel like more testing is better than no testing at all,” Crane said. “I even feel with the randomizing eventually it will get to most of the population, so ultimately I feel like it’s a good idea.”

Freshman Brendon Peau said he feels worried about the reach that randomized testing has and how there are groups of students left out of this weekly testing that can cause COVID-19 cases to remain hidden. There are currently five active student cases and one active employee case according to the college’s COVID-19 dashboard.

Peau said the testing should be an evolving process that grows from concerns the campus community might have. He said having this in place is the first step to finding more ways to keep students safe while living on campus.

“I think the randomized [testing] is a good start,” Peau said. “I think at a point we will start having to diversify by giving specific groups … so everyone gets a test or everyone at Bogart or everyone at Lyon gets a test. It’ll start evolving, they’ll figure it out at a point. I’m happy we’re at least doing it right now.”

Sophomore Tara Dikyikhangsar said she agrees with how the school is handling COVID-19 testing. However, she said she thinks randomized testing is not something that the college should continue with long-term, as she is worried it might put students at risk because not everyone is being tested.

“I think it’s good that they’re at least doing the random testing, but I think we should probably get tested once a week maybe just to keep track of the cases … especially because people are still partying,” Dikyikhangsar said.

Junior Gabi Shapiro said she thought there was some confusion between the college and the student body as to how surveillance testing would work. Shapiro said she did not like the lack of enforcement of the mask policy and how randomized testing is not mandatory. Currently, all members of the campus community are required to wear masks indoors, regardless of vaccination status.

“Well, I think at the start there was miscommunication because people were under the assumption that if you were picked then you would have to, but they are doing it where it is voluntary, so if you’re picked you don’t have to, and I think that’s just stupid because then what’s the point of having randomized testing,” she said. “I haven’t gone to two of my classes because students aren’t following mask mandates.”

Senior Brianna Lowe said she feels like necessary information is not being distributed to the campus community quickly enough. She feels that the college should go back to how it handled COVID-19 last semester with twice weekly testing for all students.

“I think that it came way too late in the semester. I think we should have started with randomized testing,” she said. “I feel more safe now that the randomized testing is in effect but do I feel 100% safe in the class? No, because COVID is still a big thing going on.”