Sophomore FYRE program could be created at Ithaca College 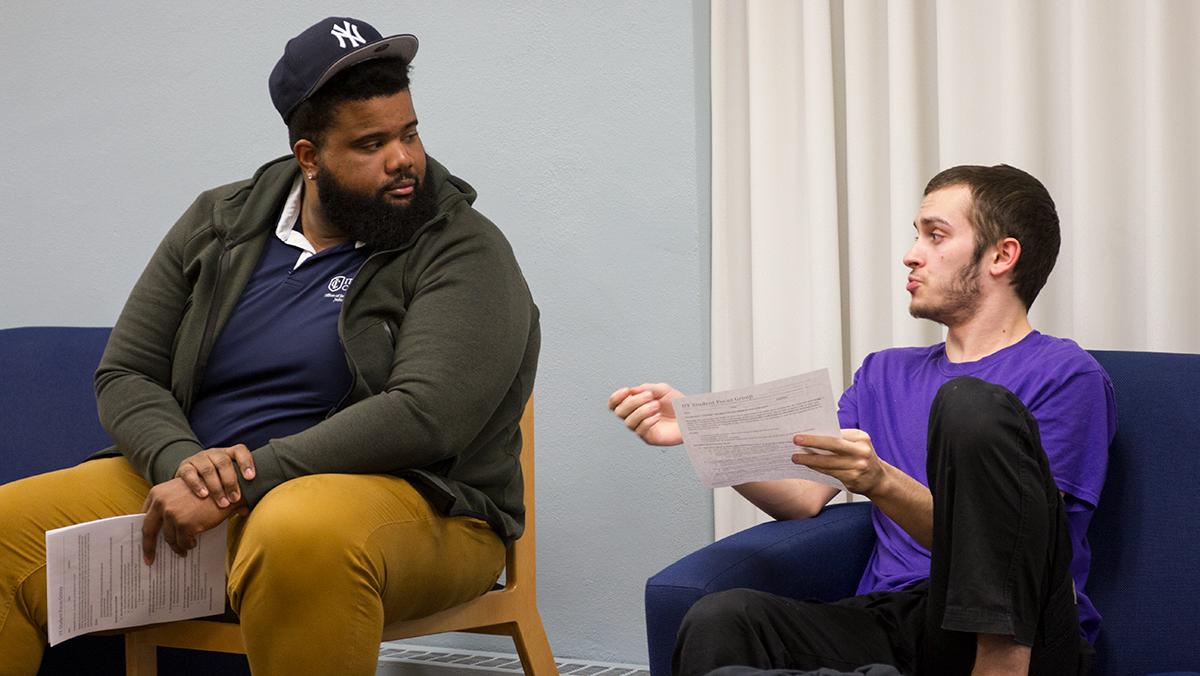 Fernando Ferraz/The Ithacan
From left, Darnell Thompson, residence director, and sophomore Christopher DiNapoli discussed how an FYRE program for sophomores could help them at the college.
By Matt Ristaino — Staff Writer
Published: February 28, 2017

The Office of Residential Life is considering creating a sophomore residential program similar to the First-Year Residential Experience, the residential community program that is mandatory for all incoming freshmen.

The office hosted focus groups Feb. 20 and 21 to collect student feedback on current sophomore housing and ideas for what students would like to see in an FYRE-type program for sophomores.

Jacqueline Winslow, assistant director of residential education in Residential Life, said this program is just in the brainstorming stage right now and that nothing is established.

“It’s just so new,” Winslow said. “We don’t know what direction it’s going to go in. We have a long ways to go to sort out the details.”

The idea of a sophomore residential experience was a part of IC 20/20, the collegewide strategic vision approved in 2011, out of which came the FYRE and the ICC in 2013. Winslow said that up until now, the FYRE was Residential Life’s top priority, but this past semester has seen the most brainstorming and attention given to the sophomore program.

If a sophomore program does get created, it will not be until the 2018–19 school year at the earliest, Winslow said. This is because of the budget cycle. Residential Life would have to put in a request for money this coming October to create the program, and those funds would not go into effect until the following year.

Winslow said that right now, there are two different ideas about how the program would look. The first would be similar to the current FYRE. There would be a couple of buildings set aside for a sophomore residential experience, which students could opt into, and specific resources would be dedicated to those communities.

The second would be an expansion of the current residential learning community program. There are currently 10 residential learning communities that students can apply to join — such as the Organic Gardening & Cooking Community and the Interfaith Residential Learning Community — and Winslow said they could expand the program by three or four more options. She said some of the possible additions that students have shown interest in are lesbian, gay, bisexual, transgender and queer allies, African diaspora and women in leadership communities.

Some of the students who spoke at a focus group last week said they would be interested in a sophomore residential experience if it were offered.

“It gives people the opportunity to expand their social networks with people who are in similar situations,” sophomore Danielle Tull said.

Sophomore Christopher DiNapoli also said he would be in favor of creating a sophomore residential program as long as it is not as limiting as the FYRE. He said the FYRE did not allow students as much interaction with upperclassmen as he would have liked and that he enjoys the freedom and independence of living in sophomore housing.

Winslow said whatever the form the new sophomore program takes, it would not be mandatory, leaving the option for students to live under the same system that is in place now — simply residing in Terraces, Emerson Hall and limited apartments.

First-year residence halls to expand in the fall

The Class of 2017 will be the first participants in a new, year-end First-Year Residential Experience event called First-Year Friday that will be held from 11 a.m. to 2 p.m. April 11 on the Fitness Center Quad.