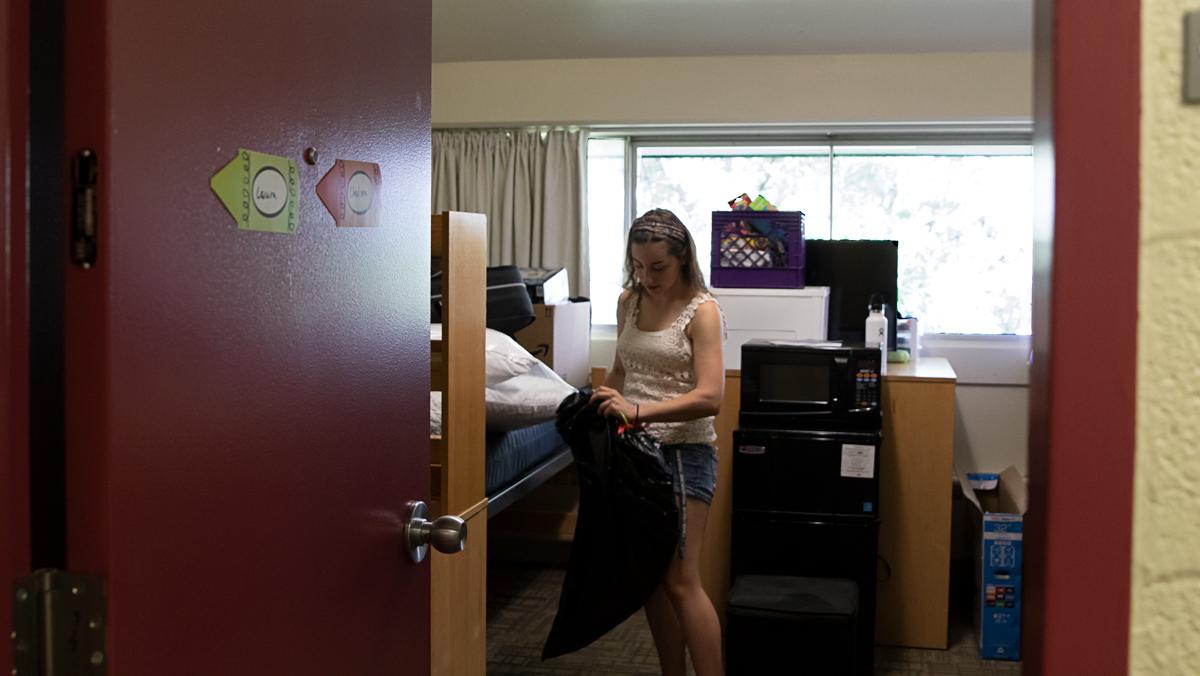 Abbey London/The Ithacan
Sophomore Laura Koch was in Towers last year and only had the option of living in a Circles Apartment without a car or living in Clarke Hall. Koch chose to live Clarke Hall.
By Ashley Stalnecker — Assistant News Editor
Published: August 28, 2019

At 9 a.m. on July 9 — an hour and a half after housing selection opened for Ithaca College’s Class of 2022 — sophomore Amanda Trahant and her roommate were ready to select housing. Trahant said she hoped to get a room in Emerson Hall. But, even with the seemingly prime selection time, Emerson and the Terraces, primarily sophomore dormitories, were completely booked. They selected a room on the sixth floor of East Tower, which is primarily a freshman dorm.

By the second day of selection, the housing portal shut down completely due to limited housing options. Sophomores who did not get their desired housing were able to apply for the summer waitlist after being placed in dorms that are not typically for sophomores, like East Tower or the Circle Apartments. The Office of Residential Life was unable to honor 32 of 92 summer waitlist requests by the time the waitlist closed July 31. Currently, seven sophomores have signed up for the fall waitlist; applications for the waitlist must be submitted by Aug. 30. All sophomores were ultimately provided with a room, but for some it was not their top pick.

Dean of Students Bonnie Prunty said housing fills up quickly for two main reasons. She said students have been notifying the college late that they will not be returning to the college, after they’ve already selected housing. If a student does not inform the office, a spot in housing will be held for them. She also said the size of the class factors into the rate at which housing fills up. Because the sophomore class is the last class to select housing, students are picking the last spaces available, which might not always include their top preferences.

This year was the first that sophomores were the only class placed into the housing lottery. Laura Davis, assistant director for Housing Services and Communications in the Office of Residential Life, said the office implemented a new process for incoming freshmen to select housing; instead of the lottery system, freshmen filled out an application detailing their preferences and were assigned a room.

On the second day of housing selection, sophomore Christina Johns found that the housing portal was closed and was asked in an email to select her preferences for housing in hopes that something would open up. The email, sent by the Office of Residential Life, stated, “Earlier this morning the online process was closed. If you have not selected your on campus housing, please submit your housing preferences by Monday, July 15, 2019, 11:59 p.m.”

Johns, who wanted to room in a single, did not have a housing assignment until she found out July 31 that she was placed into a random double in Boothroyd Hall.

Marsha Dawson, director for the Office of Residential Life, said she hopes to get feedback from students through focus group discussions and other platforms in the coming months to find a solution specific to the college. Dawson started in her position the day before the selection process began.

“We know that we have work to do,” Dawson said. “We try to ensure students are having the most positive experience.”

Traditionally, Ithaca College is a residential college with guaranteed housing for all students for all four years. For the first three years students attend the college, they are strongly encouraged to live on campus and can continue living on campus through their senior year if they chose to do so. Demand for upper-year housing has been increasing in recent years, Davis said. In 2019, 1,258 upperclassmen wanted on campus housing compared to 1,205 in 2018 and 1,187 in 2017, Prunty said.

For Fall 2019, 405 students were approved to live in off-campus housing compared to 402 in Fall 2018. Seniors do not have to apply to live off-campus.

This year, Prunty said in an email that of the 2,790 sophomore, junior and senior students living on campus, 1,223 of them are living in apartment-style buildings while 1,567 are living in other buildings. Prunty said 106 sophomores live in the Circles this year. Out of these sophomores, 50 selected to live in Circles prior to sophomore selection, and 39 students who selected on the first or second day of housing selection listed Circles as a preference.

With the cost difference, Davis said she is weighing individual complaints but has not offered a price discount to students. She said the Circles could be cheaper if the student chooses to cook food rather than live off of a meal plan.

Sophomore Julia Kirchgessner said she was working with Student Academic Services to be placed into a single room in the Terraces but could only find space in a double room in the Circles. While she was originally concerned with the costs, she said she dropped her meal plan and hopes she could save money by buying groceries.

Kirchgessner was originally on a waitlist but took herself off because she will be studying abroad in Spring 2020 and said she could make it through one semester in a less desired housing option.

Students said even though the Office of Residential Life responded promptly to calls and emails from students and parents regarding the housing situation, some students felt as though the office lacked transparency throughout the process.

At 11:30 a.m. on the first day of housing, sophomore Emily Dahrsnin said she was shocked to find all the double rooms in housing designated for sophomores were booked unless she wanted to room in a single, meaning she would have to forgo living with her chosen roommate. The pair settled for Clarke Hall to live together. Clarke Hall is primarily freshman housing and is located in proximity to other freshman dormitories.

After putting their names on the waitlist, Dahrsnin said she and her roommate were offered a room in the Terraces, but the housing process was never fully explained to her.“I personally don’t really know what happened,” Dahrsnin said. “I don’t really understand the situation. So that’s something that I feel like was never communicated.”

East Tower to get two new learning communities next semester