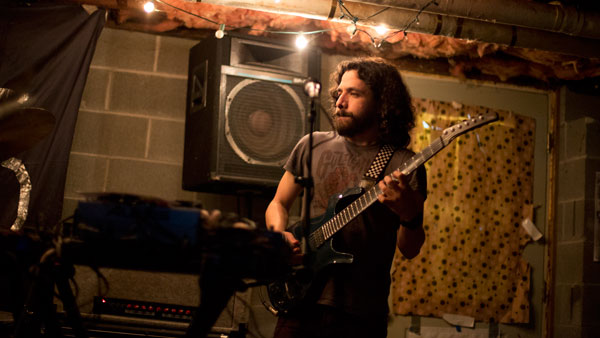 He has witnessed a metal band’s frontman walk upside down on the ceiling of The Shop, a small Ithaca coffee beanery, after being flipped over and hoisted in the air like a rag doll by the comically over-capacity crowd. He became inadvertently involved in a live performance by former all-female, art punk band HotChaCha, when the lead singer paused their set to slam a 24-ounce can of beer — saving half to pour into Bubba’s mouth and seal it with an aggressive kiss. And he has been on the receiving end of a crowd’s searing adrenaline rush when he decided to crowd surf during a New England Metal and Hardcore Festival performance and was subsequently catapulted into the air because the audience “underestimated his less-than-130-pound frame.”

Bubba has been around the alternative music block countless times and has tested the waters of nearly every genre under the vast metal music umbrella — mathrock, grindore, noise-rock, hardcore and progressive to name a few. Since 2008 when he took over Ithaca Underground, an independent music booking agency, he has rubbed shoulders with some of the scene’s biggest names: Swallowing Bile, Shredded Nerve and Eating Scabs for Protein — a sampling of the more colorful monikers.

“I asked IU’s founder, Jayme Peck, if he needed help running the org’s Myspace page. It’d only been around for about a year, and he kind of was basically like, ‘Hey, if you’re running the Myspace page, why don’t you just take this over?’ I was kind of just like, ‘Ah, what the hell.’ And I’ve been doing it ever since.”

But every show still feels like a first. Especially tonight’s event at The Haunt in Ithaca, which Bubba guarantees is going to be epic.

March rain falls light and steady outside the concrete building, its cold sting chasing smokers inside.

The Haunt, an amalgamation of a barbecue joint, nightclub, music venue and local watering hole, has boasted the likes of Pearl Jam, Red Hot Chili Peppers and one-hit-wonder rapper Sammy Adams within its walls since it moved locations in 1997 to the waterside of Route 13.

But tonight is not a night for mere mainstream mortals. Tonight it is Syracuse, N.Y.–based, noise-punk band Perfect Pussy’s turn to test the capacity of the human eardrum.

“Trust me, you’re going to need these,” Bubba says, handing over a pair of orange foam earplugs, standard operating gear for IU shows, before bouncing over to the front of the stage where Perfect Pussy is gearing up to perform.

It takes less than a minute for lead singer Meredith Graves to explode like a pygmy racehorse exiting the starting gate into a thrashing, angry, adrenaline-fueled number from the band’s wryly-named debut album, “Say Yes to Love.”

“It’s like peeling off my skin,” are some of the only discernible words Graves snarls into the mic during the 10-minute set. The lyrics are muddled by manipulated soundboard screeches and clashing cymbal claps. The venue grows cold as her distorted, fast-paced vocals alternate between whispers and screams.

Bubba and a handful of friends begin a choreographed dance, alternating left foot, right foot, inside circle, outside circle. But this is no two-step; the group is engaged in a mock fight. Left hooks are thrown, shoulders are shoved and the crowd steps back to give them ample room to prevent themselves from receiving a rogue jab.

“They’re moshing,” Melissa Casano, an IU volunteer and Bubba’s longtime romantic partner says with a laugh. “Bubba dances like that at pretty much every show, he’s literally the Energizer Bunny.”

Bubba and his throng of flailing, bearded, beanie-clad men enliven the crowd, which begins to bang its heads and jump around in response.

“Ha ha! Go f— yourself!” Graves shouts feeding off the audience’s energy and pumping her tiny fist in the air, imploring her captivated audience to have its own mini-revolutions.

“They did a limited release of the LP with Meredith’s blood in it!” Bubba shouts above the piercing vocals as he trots back over, his hair in matted disarray. He casually refers to when the band sold 300 white vinyls in March laced with samples of Graves’ blood.

While Music Times called the blood-smeared LP the “most metal record ever,” Bubba says the stunt is more along the lines of “hilarious.”

True to her gritty, screw-the-patriarchy spirit, Graves tops off Perfect Pussy’s last song with a violent spit into the crowd.

It’s hard to gauge the sheer amount of responsibility that falls squarely on Bubba’s squat shoulders. His daily responsibilities include booking bands, show promotions, fundraisers, partnership meetings with venues and potential sponsors and doing what he can to secure a 501c3 so his organization can gain nonprofit status to be exempt from federal taxes.

Juggling the daily planning of events and his day job as a business development representative with Ithaca-based software company CBORD, Bubba manages to remain as collectively cool as he is chaotically unhinged.

“Genital Holograms,” he says, nodding fondly as if recalling a particularly warm childhood memory. “That was the name of one of the bands I was in earlier on when I first got involved with IU.”

But the crux of Bubba’s character lies in how absurdly, gobsmackingly loveable he is. It’s easy to forget he is at the helm of an organization that often books bands specializing in producing the kind of music that plunges the audience into the depths of hell.

Bubba walks back over to the merchandise table where “Ithaca is Underground” T-shirts are being sold and an abandoned-looking plastic mayonnaise container reads “DONATIONS: Please Support Ithaca Underground.” But not before he’s stopped by at least three people for high-fives, hugs and a brief conversation — or as close to one as can be had over blaring metal music.

“I’ve never seen someone give or receive as many hugs as this guy,” the Haunt’s seasoned doorman Aaron Price says, eyeing the 5-foot-7-inch promoter bear-hug the

The 32-year-old’s compact body structure gives him the appearance of an underdeveloped boy oddly sporting a coarse black goatee and tightly-curled, shoulder-length black hair. Though his petiteness has hindered his ability to obtain entry into 21-and-over venues, it has also made him all the more memorable as a key figure in what he refers to as the local “DIY” music scene.

“DIY means including folks that don’t ride any sort of line,” Bubba says, a steadfast belief the organization has held from the very beginning. “Of the 40 to 50 bands we book a year, we have a bunch of queer, bi, straight, you-name-it bands in IU. Bands need to know that they’re playing in a place where that’s valued and accepted, and discrimination is not tolerated. When I’m informed of a band member’s sexual orientation, it’s more like, OK, great! Here’s something about you as a person that we didn’t know, cool.”

On any given day, Bubba can be found walking around town in a flowing velvet maxi skirt, a galabeya — an ornate, beaded Egyptian gown — gifted to him from a dear friend or his favorite pair of purple and black zebra-striped Doc Martins, which he proudly sports tonight.

“When I see clothing, I don’t really see gender. It was never a thing. My appearance was always a little bit of a statement to question what we see as gender and what we perceive gender roles to be. In high school, I would wear shorts made out of plastic and goggles with the lenses punched out and necklaces and bracelets. I always felt like I was a piece of art.”

But it hadn’t always been simple for him growing up with a radically different palate than most of his peers for alternative fashion and music. In fact, trying to be himself in high school was a real bitch sometimes.

Bubba had taken this walk down the cold science hallway of Fairport High School in Rochester, N.Y., more times than he could count. The sneers were as common as the sound of rusty lockers being slammed, and he was growing weary of both.

“Just chill,” Brett said in a futile attempt to calm his bandmate down.

Bubba stopped in front of a blank, red brick wall and taped up a poster proclaiming the show their metal band, Endo, would be playing at The Lion’s Den, a local venue, that Friday night.

But in that moment, Bubba wasn’t concerned about the show’s turnout. He wasn’t thinking about how the audience would react to their unique, new metal–esque sound or how on earth they were going to scrape together enough money to buy a new drum set. He was preoccupied with the way the jocks across the hall were eyeing him.

“I’m sick of these guys. Don’t you think they’d get tired of calling us faggots every day?”

Tom — or was it Matt? They’re all the same anyways — a classic lacrosse-playing, teenage male approached Bubba and Brett right on cue.

“Why the hell do you wear that s— on your eyes?” he demanded, as his friends gleefully looked on.

But Bubba was used to this. He had been harassed with the same questions ever since he traded up his T-shirt and jeans in sixth grade for eyeliner, a Candyland baby doll top and poofed hair.

Bubba wore his differences like a badge of honor, and they were a shield he could use to protect himself against the “assholes.” Their words usually did little to dilute his inherent self-confidence. But today was different. He was feeling unusually low, and Tom/Matt’s vindictive inquiry stung a bit.

“It’s free, so tell your friends,” Brett said handing Tom/Matt a flier in a sad attempt to diffuse the situation.

“You guys are such a joke,” was all Tom/Matt could manage through his laughter as he turned around to rejoin his entourage, letting the leaflet flutter to the ground in his wake.

They watched as Tom/Matt and company tore down posters in passing, laughing and shouting to ensure the student body knew that this was their turf and they could do whatever they pleased.

“I guess we could retrace our steps and hang them back up,” Brett offered.

“Nah, I don’t want to give them the satisfaction of a double tear-down.”

Picking up the remainder of the posters, Bubba and Brett trudged on through the hallway, posting the rest of the signs along their designated route. Brett seemed to be unaffected by the incident, but it was all Bubba could do not to run after the assholes and let them have it.

But Bubba knew that in time, their opinions wouldn’t matter. Soon enough, things would be different.

Walking over to a nearly bald man wearing an armor-plated black overcoat at IU’s show the following week, Bubba greets him with a warm smile and a “Hey, you f—— toolbag! I like the shaved head!”

“Thanks, man. It was kind of a cathartic move after a breakup of 5 years.”

“Oh, I totally get what you’re saying, I really feel that. Well it totally looks grizzled and badass! Want another beer?”

Bubba uses the time between performances to strategically mingle and catch up with nearly every person in the venue. Spotting a college-age bespectacled boy drinking straight from a Fireball whiskey bottle, Bubba gives him a nod of approval and sharp clap on the back.

Hiroshima Vacation’s up fourth, and it’s the group’s last Ithaca show. Bubba has been playing electronics for the grindcore band for a while now, and it’s a bittersweet ending to their five-year run. The succinctness of the moment is not lost on the silent crowd.

“You guys are weird!” someone yells.

“Thanks!” Bubba yells back.