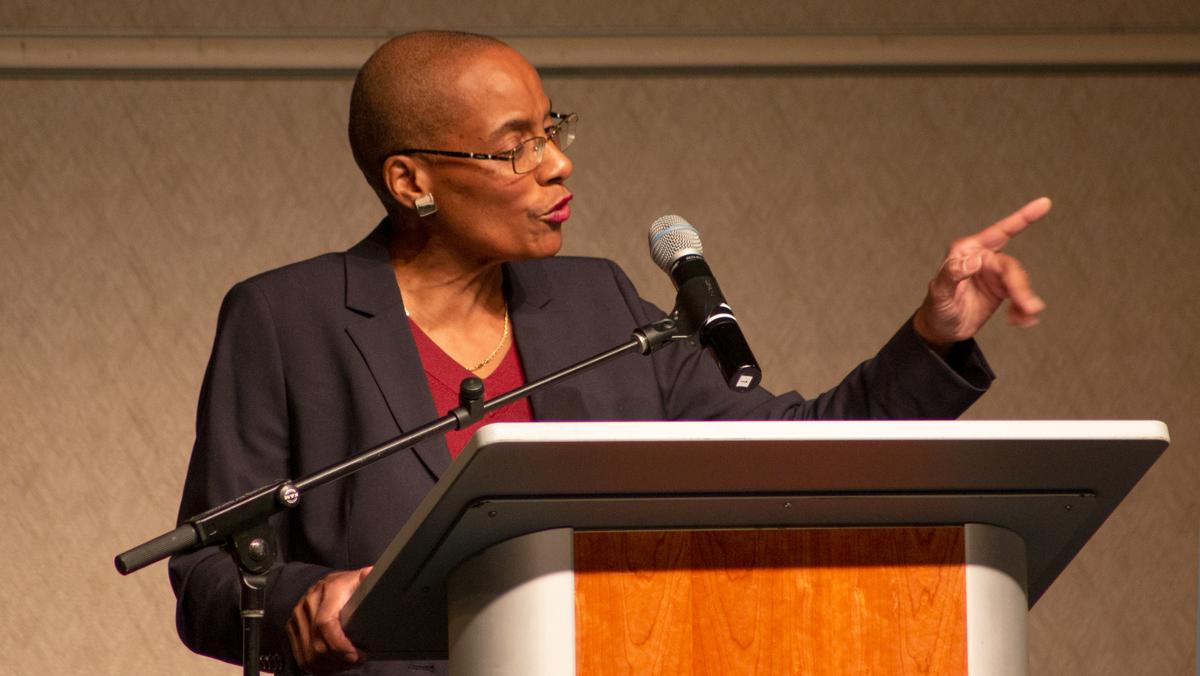 The Very Reverend Dr. Kelly Brown Douglas, dean of the Episcoal Divinity School and professor of theology at Union Theological Seminar, spoke at the Peggy Ryan Williams Difficult Dialogues Symposium where she argued that the betterment of the nation lies in deconstructing harmful narratives of anti-blackness.

Approximately 100 Ithaca College students, faculty and community members attended Douglas’ “The Soul of the Nation at a Time of White Nationalism” presentation at 7 p.m. Sept. 26 in the Emerson Suites.

Douglas discussed the origins of two narratives that she said have not only shaped the foundation of American democracy but that still exist in today’s society. These narratives were that of anti-blackness and Anglo-Saxon exceptionalism. These coexisting narratives, Douglas said, are the sources of the nation’s “warring soul.” This stems from ideas inspired by civil rights activist W.E.B. Du Bois’s notion of African Americans having a “double consciousness.” The term is often used to refer to the conflict experienced by black people in feeling they have multiple social identities due to the discrimination they face by society.

The first narrative Douglas discussed was anti-blackness. Douglas said issues like normalized police brutality, especially against young black men, are consequences of an “anti-black narrative” that has been perpetuated for years.

The roots of this narrative, Douglas said, existed in Anglo-Saxon beliefs in which one’s skin complexion was thought to be a direct representation of moral standing. She said that early Europeans’ uses of the word “black” always carried negative connotations and were associated with violence, danger and evil. Europeans regarded Africans as “more beastly than human,” furthering the contrast between the Anglo-Saxon perceptions of blackness and those of whiteness, Douglas said.

The second narrative Douglas introduced was Anglo-Saxon exceptionalism, which she said is a result of white nationalism and religiosity as well as anti-blackness. Douglas referenced early American presidents Thomas Jefferson and Abraham Lincoln who supported this narrative.

Douglas said this idea is not new to the United States but instead lies deep within its very history and, therefore, influences the relationship between black and white Americans today. She said the future of the nation lies in whether or not members of society work to deconstruct these narratives.

“For the truth of the matter is that such a soul is intrinsic to our country’s very founding identity,” Douglas said.

Douglas said white racism is an ideology that has its roots in Anglo-Saxon exceptionalism.

“White privilege is the unspoken and taken–for–granted benefit bestowed upon white people by America’s myth of Anglo-Saxon exceptionalism, which fosters and sustains notions of white superiority and black inferiority,” Douglas said.

Nia Nunn, associate professor in the Department of Education, said she always appreciates when scholars openly discuss how anti-blackness was and continues to be normalized.

“She acknowledged that whiteness is parasitic, if that’s the right word, to blackness,” Nunn said. “I feel like there’s this different way in which she’s setting a charge for the interruption … and this reality of holding ourselves and others accountable for that interruption.”

Sophomore Shevori Gene said the presentation opened his eyes to how the country reached its current state of racial hierarchy. Gene, who is also an MLK Scholar, said that knowing the history of the nation and its narratives are crucial to bolstering change for the future.

“Being able to identify how we got here today is very important in the struggle towards where we want to be,” he said.