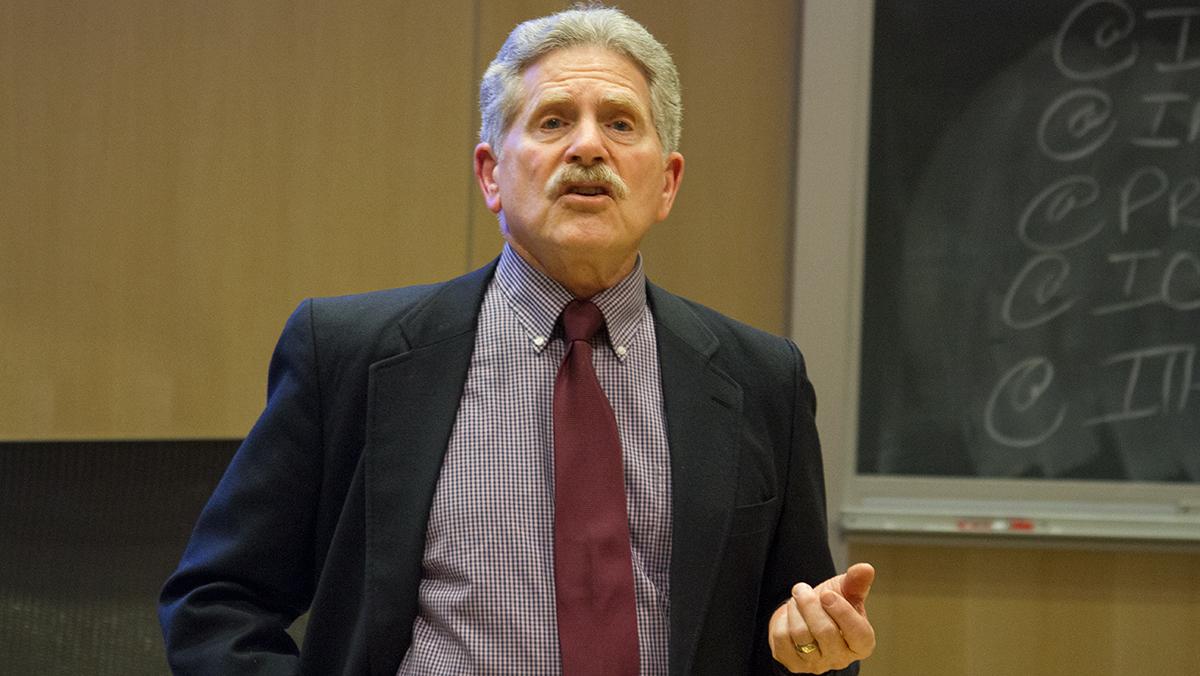 Bob Freeman, executive director of the New York State Committee on Open Government, has visited Ithaca College a number of times to speak about New York’s Freedom of Information Law, but his most recent presentation, on March 6, also tackled a subject new to many journalists: the phenomenon of “fake news.”

Since 1976, Freeman has been the committee’s executive director and is the leading authority on freedom of information in the Northeast. The college’s chapter of the Society for Professional Journalists brought him to the college to talk about these laws and the importance of having trust between the press and the people.

“We’re a journalist-centered club, and [the Freedom of Information Act] is very important in the field for any journalist to have knowledge of that and to figure out how to get information that they need for any story,” said sophomore Devon Bedoya, vice president of communications for the SPJ chapter.

Freeman discussed the necessity for truthful media and how the distortion of information can lead to President Donald Trump’s claims that former President Barack Obama had been tapping his phone calls, an accusation that has not been confirmed.

“We have a greater need now for professional journalists, truth tellers, people who can provide information that is objective and factual in an understandable way more than ever before,” Freeman said. “Any idiot can establish a blog or a website or a tweet, and it becomes increasingly difficult to know what’s true and what’s not. And that’s why we need you more than ever before.”

Freeman also discussed the legalities surrounding when information can be publicly disclosed. He spoke about the concept of executive privilege — a right of the government to deny disclosing information if it can demonstrate the information would be detrimental to the public and the functioning of government.

About 40 students, faculty members, local journalists and lawyers attended the event. The SPJ coordinated this event with the help of adviser Mead Loop, associate professor in the Department of Journalism, to inform journalists of ways to seek out important information they might not know of, Bedoya said.

Sophomore Amanda Chin, president of the IC SPJ, said Freeman spoke about a topic that reporters need to hear if they want to be successful and informed journalists.

“I feel like this event is very important because a lot of people don’t know all of the freedom that journalists do have access to,” Chin said. “We have access to so much information that it’s important for us to know what our rights are.”

Freshman Jake Dau said he came to listen to Freeman’s presentation to learn more about the journalism. Dau said he thought the speech was informative about how journalists should go about practicing ethical journalism objectivity.

“He is very knowledgeable about the topics,” Dau said. “The whole idea of what he was talking about is that you have to be as objective as possible without throwing any bias in and sticking to the correct information.”

News outlets should not have to fear that they will be labeled “fake” for reporting on real information.

Free press is a cornerstone of democracy