Speaker presents on benefits of diversity in photojournalism 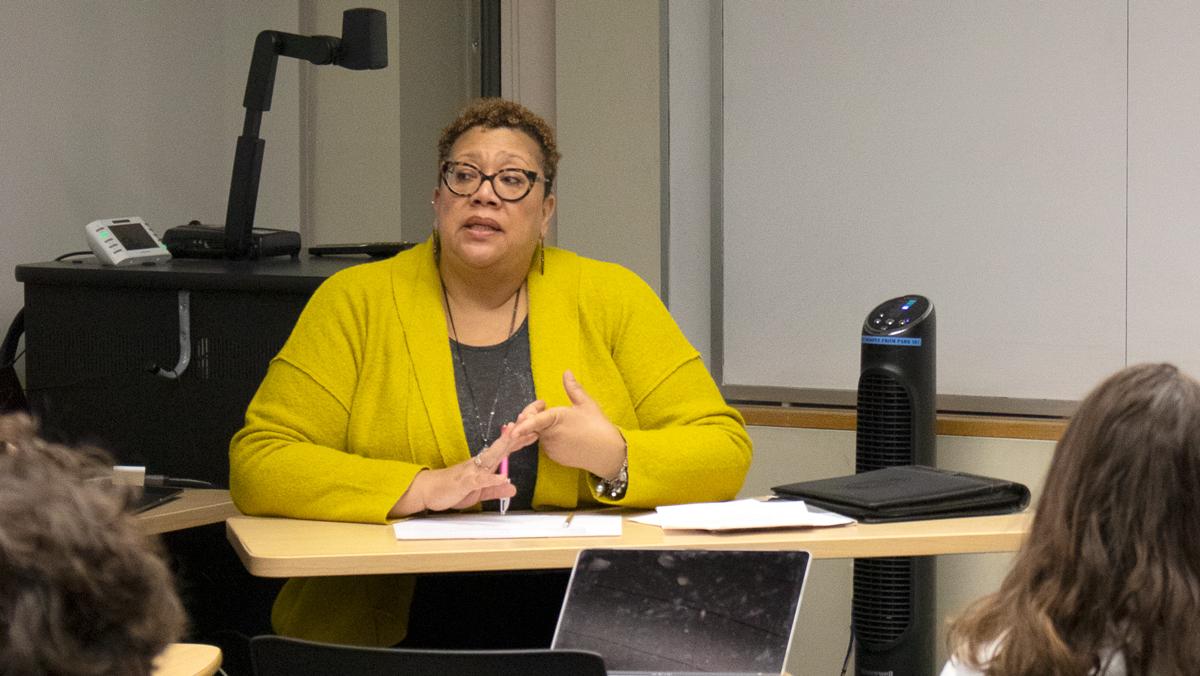 Caroline Brophy/THE ITHACAN
Gina Gayle spoke about the prejudice she has overcome throughout her career as a photojournalist and multimedia storyteller during her talk through the Emerging Diversity Scholars Program on Feb. 24.
By Julie Dannevig — Staff Writer
Published: February 26, 2020

As a woman of color, Gina Gayle spoke about the prejudice she has experienced and overcome throughout her career as a photojournalist and multimedia storyteller during her talk through the Emerging Diversity Scholars Program on Feb. 24.

“I have always been the diverse one in this room as a black woman in this society,” she said. “It has just been my story and my experiences.”

Invited to Ithaca College by the Emerging Diversity Scholars Program, Gayle has worked as a freelance photographer and as a photographer for the San Francisco Chronicle and is currently working towards earning her doctorate. Throughout her career, she has received awards and fellowships, including the Hearst Newspaper Journalism Fellowship and the National Association of Black Journalists (NABJ) Gulf Coast Fellowship. Gayle was the first woman of color to work for the San Francisco Chronicle’s photography department, she said.

Gayle shared many stories with the audience about navigating the journalism field as a self-taught photographer. She said she strived to embrace her diversity and gain confidence in herself and her work.

“I’m black, I’m female, I’m full-figured and I’m loud,” she said. “That is all that I have ever known. It has not always worked for me. It has, at times, worked against me, but what happened is that I had to learn to embrace everything that I am.”

Gayle said she grew up in a very diverse neighborhood but went to school at an affluent, all-girls private school. She grew up around a variety of people from different cultures, social classes and values, and, she said, she was able to use these experiences to become a better photographer.

“All of my experiences have allowed me to be the diverse one in the room, regardless of what room it is,” she said.

Gayle said that being the diverse one in a room should be a positive thing. She said the different experiences people have had offer new perspectives, a source of knowledge and an ability to empathize.

Sophomore Desoni Cooper, a documentary studies and production major, said she was interested in hearing from a successful figure in the media industry who represents women of color.

“I like seeing other people who look like me in the field and thriving and achieving,” she said. “She was transparent about her experiences and background, and I was really able to connect with her.”

Freshman journalism major Brianna Diaz said Gayle’s experiences in the journalism field as a woman of color captivated her.

“It’s important to have POC speakers like Gina who are thriving in the industry to come and talk at a [primarily white institution],” Diaz said. “There’s a different perspective with what she has to say.”

Activist speaks on intersectionality in activism