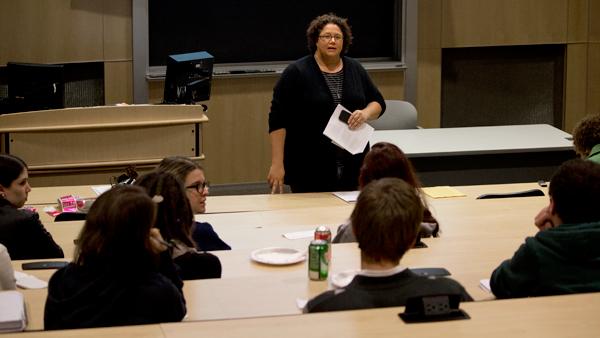 Sabrina Knight/The Ithacan
Maureen Kelly, vice president for education and training at Planned Parenthood, leads a discussion about education and feminism during at the event hosted by the Women’s Studies program Oct. 8.
By Sara Webb — Staff Writer
Published: October 11, 2012

Sex education is about more than contraception and abortion. At the 14th World Congress of Sexology, participants created a Declaration of Sexual Rights that supports individual sexual freedom, extending as far as to a right to sexual pleasure.

After learning about the declaration, students were asked to discuss what human and sexual rights mean to them during the first discussion of the three-part series, “From Reproductive Rights to Reproductive Justice” hosted by the Women’s Studies program.

Maureen Kelly, vice president for education and training at Planned Parenthood of the Southern Finger Lakes, kicked off the series by informing students which rights they are and aren’t guaranteed.

Kelly’s discussion centered on sex, sexuality and sexual rights and encouraged students to talk about their experiences in sex education.

Women’s reproductive health has been a prominent issue in the presidential election. Currently, bills are circulating in Congress regarding the personhood of an unborn child and women’s rights to abortion.

Kim Baker, assistant professor and women’s studies coordinator, said members of the Women’s Studies program decided to hold the series because of the debates surrounding birth control and abortion in the election.

“It’s the idea of talking about people’s experiences that are often left out of discussions about reproductive rights and specifically abortion and birth control, but also helping students think about ‘Why does this matter?’ and ‘What can I do about it?’” she said.

According to Planned Parenthood, under the Affordable Care Act, private insurers are now offering birth control and other preventative services without co-pays or deductibles.

“With this series that we’re doing this semester, there is a whole lot going on in the media and in political commentary about reproductive rights and especially issues around birth control and abortion,” Baker said. “My opinion is this stuff matters because we’re voting on it. Wherever you exist on the continuum of political ideology, know what you’re voting for and know the impact on your rights.”

Senior Emmet Brault said it is important to have discussions like these with people you love and care about, because it’s important to be able to be sexually free.

Brault said he believes legislators are trying to stop discussions on reproductive rights. In particular, he said, politicians who are arguing for the existence of legitimate rape.

“It’s important to be able to talk freely about this because it affects us in every sphere, not just personally but also politically,” Brault said.

Kelly also inspired group discussion with a booklet of prompts, “sexuality, human rights and sexual rights … a brief chat,” and encouraged students to talk to one another about what they thought were important sexual issues.

Kelly also covered the Declaration of Sexual Rights, a document approved by the General Assembly of the World Association for Sexology, which includes a list of 11 sexual rights that are guaranteed to each person, such as the right to sexual freedom and the right to sexual health care.

“It’s something most people don’t know about and it broadens the concept of what sexual rights should be for people. People should know this,” Kelly said.

Kelly said she met her goal working with students at the workshop and was impressed with the turnout, which included members of IC Feminists.

“My goal was to acknowledge the reality surrounding our conversations about sexuality and reproduction in this country, and that they are fairly limited pieces of a conversation,” Kelly said.

Junior Grace Woodward attended the talk with IC Feminists. She has heard Kelly speak before but had forgotten about the list of sexual rights in the declaration.

Woodward said she believes the declaration is important, because it is something not often talked about, particularly in the government.

“It was cool to see that they were documented somewhere, and that globally we have the rights to these things,” Woodward said.

Kelly ended the workshop with a bingo game designed to facilitate discussion between students, this time about the Declaration of Sexual Rights she had just presented. Students were awarded prizes when they achieved bingo by marking off discussion topics.

“I wanted to explore pieces of a larger concept that there’s this idea of sexual rights and sexual health and what these broader concepts look like, and to give people a chance to acknowledge that this can be complicated, and it’s bigger and messier and much broader than they’ve ever been taught,” Kelly said.