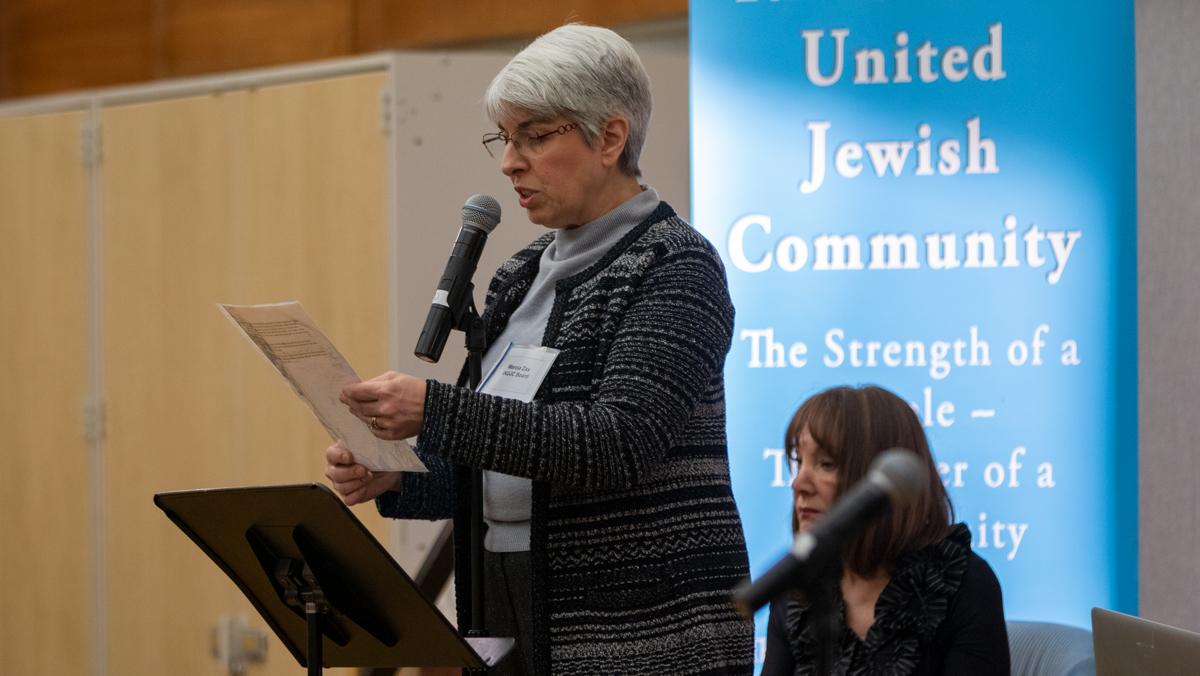 Like many kids, Roald Hoffmann, born to a Polish-Jewish family in Ukraine, had a relatively normal life as a child until the Nazi occupation of Eastern Europe.

He spent 15 months hiding in his schoolhouse attic after escaping a Nazi labor camp with three other children and two women.

“Everyone was scrambling for a place to hide,” he said. “It was 1,000 miles to the nearest border. You were looking for someone to hide you.”

Hoffmann’s story of survival is just one example of the roles non-Jewish neighbors and centers played in hiding and protecting Jewish people during the Nazi regimes that were discussed during a panel held Feb. 2 in the James J. Whalen Center for Music. The panel consisted of Hoffman; Eva Fogelman, who shared her experience working with Holocaust survivors and rescuers; and Dan Schwarz, who shared his views on being an ally.

The panel, which took place less than a week after the 75th anniversary of the liberation of Auschwitz, a death camp where approximately 1 million Jews were murdered by Nazis — focused on sharing stories about non-Jewish rescuers during the Holocaust. The intention was to emphasize the importance of not being a bystander, the panelists said.

“As we commemorate the 75th anniversary of the liberation of Auschwitz, we cannot only remember the victims and the perpetrators,” Fogelman said. “We must also pay tribute to those who risked life and limb in order to continuously remain humane under conditions of extreme terror.”

The event was sponsored by Hillel at Ithaca College, the Department of Jewish Studies and other Jewish centers in Ithaca. Mostly faculty, staff and Ithaca locals attended the event.

Miriam Spitzer, who is the rabbi at Temple Beth-El, a synagogue in downtown Ithaca, opened the panel with a prayer and an excerpt from a book by Rabbi Lawrence Kushner of Emanu-El in San Francisco. She said this story was to share just one example of a selfless act of kindness during the Holocaust.

Spitzer also mentioned how anti-Semitism is still prevalent today, and she noted the series of anti-Semitic hate crimes that have recently occurred, including the attacks in Monsey, New York, and Jersey City, New Jersey.

“Anti-Semitism is on the rise in the world,” she said. “We are seeing things none of us ever expected to see again in our lives, certainly not in the United States of America.”

Fogelman said she has worked with rescuers of Jewish victims from the Holocaust because she wanted to better understand the psyche of someone who would put their life at risk for someone else.

Non-Jewish people who rescued Jews during the Holocaust are recognized at Yad Vashem, a Holocaust museum in Jerusalem, as “Righteous Gentiles.” The website contains many of their testimonies, as well as certificates of honor to commemorate the rescuers.

Schwarz said he believes everyone should continue learning and remembering the events of the Holocaust because this is the last generation that will be able to hear firsthand accounts.

He also said he hopes the audience learns how standing up against injustices helps those being oppressed.

“We all need to remind ourselves what it is to be vigilant, decent human beings,” he said.

Mirit Hadar, lecturer in the Department of Modern Languages and Literatures at the college, who teaches Hebrew and Israeli culture and has family members who survived the Holocaust, said she attended the event because she thinks it is important to learn from the past.

“It is of a tremendous importance to understand the culture of hate nowadays, not just in the respect of anti-Semitism, but in a larger extent,” Hadar said. “Hearing why people should stand up and not be bystanders is a lesson that we should learn for the future generation.”

“To have people with this collection of experience in one place and having them expand on their experiences is quite a value itself,” Norton said.