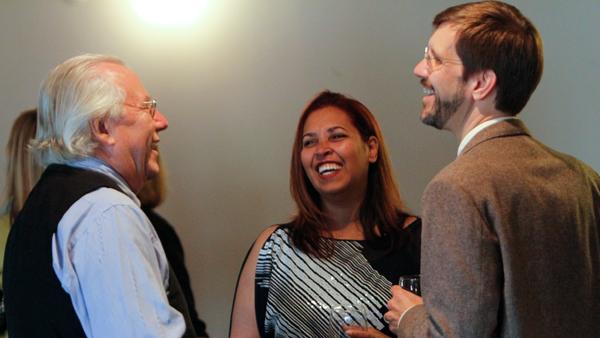 Sonali Samarasinghe didn’t run away at all. She was kicked out.

Freedom of Information has been an ongoing battle in Sri Lanka. According to the Committee to Protect Journalists, in 2004 former President Chandrika Bandaranaike’s cabinet approved a Freedom of Information Bill, but nothing came of it after the Parliament was dissolved. In 2011, a relabelled Right to Information Act was also denied.

Her whole life Samarasinghe believed in freedom of speech and open communication between the government and the people, things that Sri Lanka didn’t have. These beliefs only grew stronger after the assassination of her husband, Lasantha Wickrematunge, editor in chief of the Sri Lankan investigative newspaper Sunday Leader, in 2009.

“I’ve realized many things,” Samarasinghe said. “When the horrible death happened, I realized that humanity can be ugly and very wicked. But I also realized that there is goodness in people and compassion, and that really amazed me.”

Samarasinghe and her husband were threatened to shut down their newspaper numerous times, but they felt they had a duty to write about government wrongdoings.

Shortly after his assassination, she was exiled.

The well-known Sri Lankan lawyer, journalist and human rights activist was welcomed as an International Visiting Scholar in Honors to Ithaca College on Sept. 19. This program is in cooperation with the Ithaca City of Asylum, which supports writers who have escaped their country and whose works are suppressed.

Dan Renfrow, chair of the ICOA, said Samarasinghe is a perfect candidate to host in Ithaca as a Writer in Residence from 2012-2014 because of her work in activism towards freedom of the press and freedom of speech.

Samarasinghe’s experiences are not only inspiring, Renfrow said, but are very timely because of the growing number of ways people can share views and information with new technology.

“The liberty in our country for freedom of the press and freedom of speech doesn’t exist everywhere,” Renfrow said. “So it’s important for all of us to stand united in protecting those rights and trying to make certain that others have those rights as well.”

A witness to civil war and extreme journalistic censorship, Samarasinghe said she will use her knowledge and passion to teach courses in the areas of politics and communications this fall.

“The faculty and I have been able to discuss collaboration on many subjects and across many departments like anthropology, history, writing and modern languages and literature,” Samarasinghe said.

Samarasinghe has written many articles about political corruption and extreme human rights violations. She also had a large following at the newspaper, the Morning Leader, at which she was the editor in chief.

“Really, when it comes to legal studies and journalism I am in my element, because that’s what I’ve been doing for the past 25 years,” Samarasinghe said.

As an International Visiting Scholar in Honors, Samarasinghe will teach special courses and lecture on topics such as the forgiveness factor in reconciliation and transformative justice. The lectures will be open to all students, she said.

Barbara Adams, associate professor in the department of writing, is a member of the ICOA and a founding member of the organization. Samarasinghe is the first journalist they’ve hosted. Adams said she will give the Ithaca community insight into how those in other countries may have to fight for their freedoms.

“We live in a privileged society where we often take our freedom of speech for granted,” Adams said. “It’s enormously valuable to have access to any individual, but particularly writers, who has a very different sense of what it means to speak in a country where free speech is constrained as it was for her.”

An important aspect of Samarasinghe’s job at the college will be to raise awareness of the dangers of the Internet and how it can be used by not only activists, but also the government. In Sri Lanka, the government makes sure all news websites, even those created in the country, are registered with the Media Ministry in Sri Lanka, she said.

“In a way, what has happened with repressive regimes and the Internet is that it has become a lot more difficult to hide the truth, and that is a good thing,” Samarasinghe said. “But you must understand that they too have that tool. They could send us misinformation.”

Democracy and justice are important to Samarasinghe, she said, which is why she didn’t let her husband’s death impede her commitment to exposing the truth.

“Journalists are at the forefront of history,” Samarasinghe said. “They are able to change the world. Move forward, do what you’re doing, and do it better and do it faster and do it harder.”

When something as defining as her husband’s death happens, it changes you and gives you hope, she said.

“I’ve learned that when something horrible happens, like death, to respond to it with life,” she said. “When ugly happens, to respond with beautiful things.”