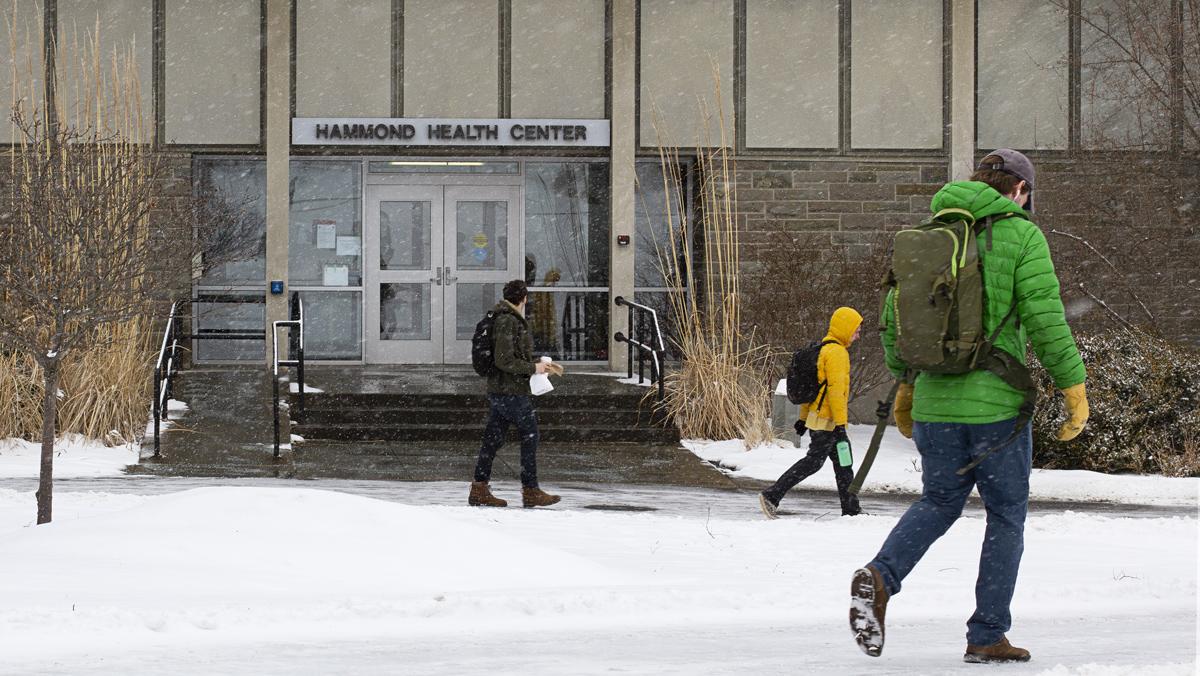 Kristen Harrison/The Ithacan
The Hammond Health Center would not provide more specific numbers on the rates of students with STIs or the number of students who have gotten tested at the college due to confidentiality policies.
By Sam Haut — Staff Writer
Published: March 27, 2019

Ellyn Selin-Sellers, interim medical director of the Center for Counseling, Health and Wellness, said 51.7 percent more students were tested for gonorrhea in the 2017–18 academic year compared to the 2014–15 academic year, and the percentage of students testing positive for gonorrhea remained at 1 percent from 2014–15 to 2017–18. Gonorrhea is a bacterial infection that can infect both men and women and most often affects the urethra, rectum or throat.

For chlamydia, the number of students who tested positive went from 8 percent during the 2014–15 academic year to 6 percent during the 2017–18 academic year. Selin-Sellers said 50.2 percent more students were tested for chlamydia in 2017–18 compared to 2014–15. Chlamydia affects both men and women and can be treated once someone is aware of it, but if left untreated, it can lead to more serious health problems, including other STIs, infections in newborns, pelvic inflammatory disease, infection near the testicles, prostate gland infection, infertility or reactive arthritis.

According to the Mayo Clinic, sexually transmitted infections, or STIs, are generally transmitted through sexual contact with someone else who has an infection. It is also possible for STIs to be transferred during pregnancy or blood transfusions. STIs have a range of symptoms — or even no symptoms — that are caused by various viruses, bacteria or parasites. A survey in the U.S. Journal of Adolescent Health said 12 percent of people aged 15–24 got tested for STIs in 2016.

Selin-Sellers said that based on rates from the American College Health Association’s (ACHA) 2016 STI survey, Ithaca College’s rates of gonorrhea and chlamydia are similar to those at other colleges and universities.

Selin-Sellers said the Health Center offers testing for various STIs as well as other related health services for students on campus, but she would not comment on any of the numbers because she did not feel comfortable interpreting the data.

“We have found that education during college is not only found through learning in the classroom,” Selin-Sellers said. “Our health center staff is well–equipped to educate our students about STI prevention and treatment. We strongly encourage condom use and offer free condoms to students. We strive to be a judgment-free, welcoming, confidential resource for our students.”

According to the New York State Department of Health, the number of diagnoses for STIs in Tompkins County in 2017 is much smaller compared to other counties. For gonorrhea, 87 people were diagnosed with the infection, while 423 were reported to have chlamydia.

Laura Carapella, associate professor in the Department of Health Promotion and Physical Education, said via email that the higher test rates at the college may represent less stigma toward STIs.

“When the number of people getting tested goes up and it appears that more people have STIs, it may be very likely that the numbers are deceiving and simply representing that more people feel comfortable getting tested,” Carapella said. “The culture of the Ithaca College campus community apparently has demonstrated a positive change, in that the college is received as a safe place to get tested and more students believe they should get tested.”

Carapella said that in her classes, she gives her students different information regarding STIs, from symptoms to the stigma associated with getting tested.

“In class, we discuss each STI, symptoms, ways to protect yourself, where to get tested, how often you should get tested,” Carapella said. “The importance of being open and honest with all sexual partners regarding STIs, and how important it is to have a support system and avoid shame.”

Carapella said there are many steps a college can take to make students more aware of STIs and more likely to seek treatment.

“Programs that students would benefit from include STI awareness programs and programs that focus on reducing or eliminating shame surrounding this topic,” Carapella said. “Some students think their lives are over and nobody will ever love them if or when they find out they have an STI. These thoughts lead to greater mental health concerns.”

Nancy Reynolds, program director for the Center for Health Promotion, said via email that the center provides students with access to free internal and external condoms, lube and oral dams for STI protection, along with free print materials on safer sex practices and healthy relationships. Reynolds said student–demand for these services has remained constant throughout the past decade.

Fred Wyand, director of communications at the American Sexual Health Association said that across the country, infrastructure that supports funding STI awareness has been crumbling and that programs are trying to increase outreach with the same level of funding. The fact that the college has seen the testing rate for STIs double over the past two years is something Wyand said he sees as encouraging.