As Halloween approaches, heightened images of cemeteries and the living dead can resurface long-forgotten fears, but for some Ithaca College students, their fear goes beyond the annual celebration.

A phobia, or irrational fear of something that in reality poses little or no actual danger, afflicts about 18 percent of adults in the United States in a given year. These phobias can range from the mundane, such as the fear of spiders, known as arachnophobia, to the more unusual such as omphalophobia, the fear of belly buttons. 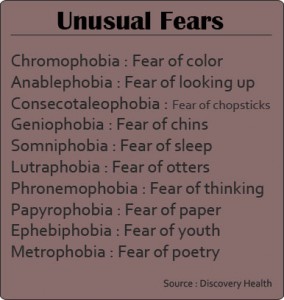 Freshman Elisa Rodriguez said she considers herself a naturally easygoing individual, that is, until balloons come into the picture.

“Balloons are the only things that make me feel really uncomfortable,” she said. “I’m usually not emotional or jittery otherwise, but if I get too close to balloons, I start crying and I have no idea why.”

It’s not just the way balloons look that makes Rodriguez’s heart do backflips.

“I don’t like the noises they make and the fact that they are unpredictable and can pop makes me really uncomfortable,” she said. “I just can’t be near them.”

Rodriguez’s fear of a seemingly harmless object is not unfounded. According to the National Institute of Mental Health, phobias are the leading mental illness among women and the second most common illness among men older than 25.

Mary Popovich, a psychology social worker for St. Joseph’s Hospital in Nashua, N.H., said nobody is exempt from experiencing a phobia.

“There’s no real rhyme or reason to it,” she said. “It can happen to anyone, but usually if you’ve learned good coping strategies through your life, you’re less likely to develop them as you’re older.”

Since children have the least experience with frightful items, Popovich said, they are less likely to have coping mechanisms, and therefore childhood is perfect grounds for picking up a phobia.

“In my experience, fear comes from experiences that you have when you’re younger, and they continue into adulthood by being reinforced,” Popovich said.

Freshman Ariane Seymour has been terrified of Kermit the Frog since the age of 8 after dreaming the Muppet was chasing her around with a butcher knife. Despite the dream occurring years ago, Seymour still experiences anxiety when in the presence of the Kermit’s image.

“I absolutely recognize this is irrational,” she said. “I know it sounds so stupid when I tell people that I’m afraid of Kermit the Frog, but I can’t help it.”

To cope with her anxiety, Seymour employs avoidance rather than pursuing psychological assistance. For instance, when confronted with a picture of Kermit the Frog, she avoids eye contact and shrinks away.

Freshman Leah Galant fights the same impulse to flee the object of her personal terror — the 1800s.

“This past weekend I went to my friend’s lake house, and I asked what was the deal with the house,” she said. “Apparently the house was a hospice for women in the 1880s. I had to run out of it.”

For Rodriguez, her fear of balloons is often limiting. During Senior Week at her school, Rodriguez couldn’t participate in a prank because it involved balloons, and she cautiously attends celebrations and birthday parties because of the common decoration.

“I was at a friend’s birthday party and she had balloons, and I told her I couldn’t be near them,” she said. “Her boyfriend thought it would be funny to bring a bunch of balloons to me and pop them, and I started sobbing. I had to leave. This is starting to become a big problem. I can’t be near them.”

Popovich said fear is a problem when it interferes with the individual’s ability to function in different areas. Although there are quick fixes to phobias such as avoidance, they are no substitutes for treating the phobia. Popovich said individuals can face their fears head-on through a process known as cognitive-behavioral therapy.

The process teaches the individual suffering from a phobia how to react differently to situations or items which onset anxiety or panic attacks. Patients are also taught how their thoughts contribute to the anxiety and learn ways to change their thinking to alleviate and potentially stop this unease.

“It’s really about changing the thinking process,” Popovich said. “If you change the way you think about a situation or something that’s frightening to you, then you can work on overcoming the fear. Once you start changing your thinking, you’re able to start coping with the situation.”