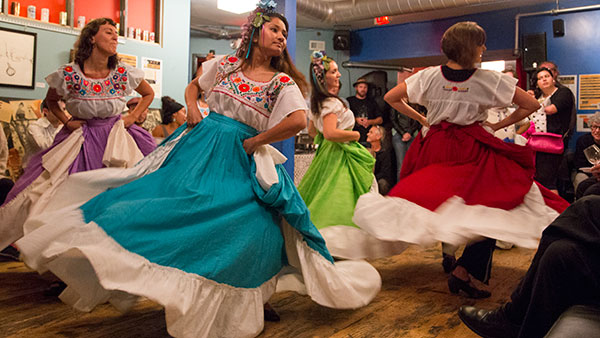 Corey Hess/The Ithacan
The Ithaca community celebrated Latino/a Heritage Month with a kick-off party at 6 p.m. on Sept. 15 at the Lot 10 Bar and Lounge on the Commons.
By Taylor Zambrano — Assistant News Editor
Published: September 17, 2014

In honor of National Latino/a Heritage Month, which runs from Sept. 15 to Oct. 15, Ithaca College premiered an alumna-produced documentary titled “Fighting for Truth, Justice and Reparations” Sept. 15 at the First Unitarian Society of Ithaca’s Annex.

The film, which was produced by Caroline Podraza ’14, is about the Movimiento Campesino de Cajibio, a group of small farmers who are interested in sustainable living and growing crops for themselves and for their communities, instead of feeding into the larger corporations.

Podraza said Rodriguez brought her along because she knew how passionate Podraza was about social movements, and she wanted her to document the trip. She said the farmers in Cajibio have undergone oppression, hardships and violence, including the killings of their family and friends, while trying to protect their own land.

“Understanding the struggles they’ve gone through in trying to maintain this Campesino identity and also trying to push the government for protections and regulations, we felt the need to bring it to an international level and make it aware to all people around us,” Podraza said.

Rodriguez said their activist group was formed through Witness for Peace, an organization that sends delegations of U.S. citizens to Colombia to uncover human rights violations and exploitation of economic resources.

Podraza said the people involved in the Movimiento Campesino de Cajibio have had their freedom of speech rights severely challenged and suppressed on numerous occasions, but they still continue to fight back with whatever they have available to them, which includes reaching out across the nation to places like Ithaca through Witness for Peace. She said many of the movements in Ithaca regarding agricultural rights and other freedoms parallel the same rights they’re fighting for in Cajibio.

“When people think of the Americas, they only think of North America as America,” Podraza said. “[The trip] kind of gave me a little bit more of a global concept of the Americas and also how we need to show solidarity across these two [continents].”

Rodriguez said a Witness for Peace delegation helped build a “sister relationship” between the U.S. and the Movimiento Campesino de Cajibio, which has helped to form an international solidarity for the past 10 years.

Rodriguez said her activist group interviewed active community members from the Syracuse, Ithaca and Cortland areas before the trip about what tactics they use to fight for their own rights. She said her group brought this information over to members of the Movimiento Campesino de Cajibio in Colombia for their use.

“It’s not just about bringing awareness about Colombia, but it’s about creating and strengthening these ties between communities,” Rodriguez said. “We’re all in this world undergoing similar processes of war displacement and exploitation … if we’re not talking to each other, we’re missing something.”

Harris said the Movimiento Campesino de Cajibio is very active and supportive when it comes to their own community as well. She said the Campesino had come up with different approaches to farming to bypass some of the issues they have been facing.

Rodriguez said she believes Latino/a Heritage Month is in place to raise awareness about people of the Latino descent and to recognize their shared values in their communities, whether in Colombia or in the U.S.

Cultura Ithaca is one of the groups that hosted the kickoff event for Latino/a Heritage Month on Sept. 15 in downtown Ithaca. The host of the event, Carolina Osorio Gil, said she was aiming to create an atmosphere that would make most Latinos feel at home.

Osorio Gil said her organization aims to put on free and low-cost Latino and Latin American cultural arts and education events all year and tries to focus mainly on live performances by the Latino talent in Ithaca.

“I was born in Colombia and moved to the U.S. when I was 4 and a half,” Osorio Gil said. “I yearned [for] that old music playing and the food that kind of makes you feel right at home.”

In addition to this kick-off, Cultura Ithaca will be hosting a film festival throughout the month in downtown Ithaca. It is free and open to all members of the community.