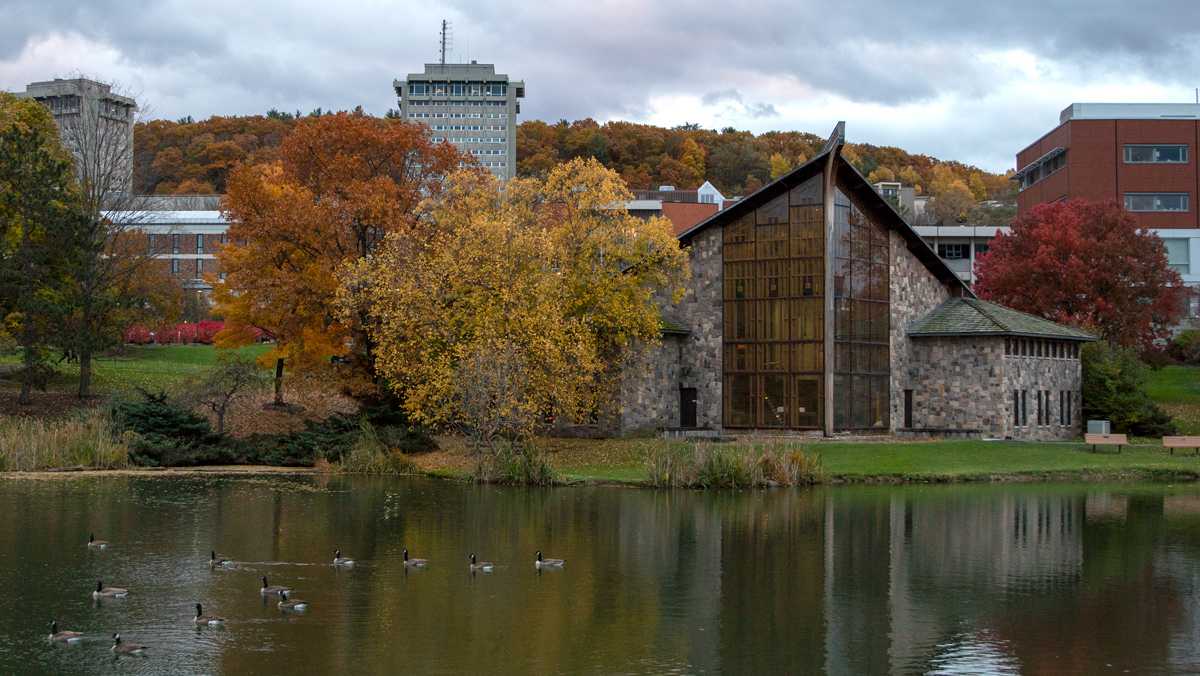 Elias Olsen/The Ithacan
Senior Vanessa Zimmerman filed a human rights discrimination complaint against the college, alleging that she was discriminated against while working in Muller Chapel because of her sexuality.
By Grace Elletson — Editor in Chief
Published: February 6, 2019

An Ithaca College student has filed a human rights discrimination complaint against the college, alleging that she was discriminated against when working as a chapel employee due to her sexuality.

Senior Vanessa Zimmerman filed an employment and education discrimination complaint with the New York State Division of Human Rights in November. Zimmerman worked as a chapel assistant for the Ithaca College Protestant Community (ICPC) during her second semester of sophomore year. But when she came out as gay in a Facebook post and announced she was in a relationship with another ICPC member, she said she began receiving condescending messages from fellow members and alums, chastising her for the relationship. She said the hostile environment fostered by the ICPC caused her to quit her job, which impacted her educational success.

Zimmerman said she was sent messages from people in the ICPC criticizing her relationship, and at one point had a verbal altercation with a former ICPC member who she said was condescending toward her because she was gay. She said she felt ostracized and unsafe in the ICPC.

Zimmerman is not the only student to have come forward detailing experiences of exclusion from the ICPC due to their LGBTQ sexual orientation, as initially reported in the March 8, 2018, edition of The Ithacan.

Since Zimmerman filed her complaint in November, the college submitted a rebuttal to the division. Zimmerman submitted her response to the college’s rebuttal in late January. Now, the case will go through a review process in the Division of Human Rights, in which it will be determined if there was probable cause found in the case. If this is found, the case will move forward to be settled by an administrative judge at the state level. The division has 180 days to resolve the case.

In the college’s rebuttal, it claims that it is not responsible for the discrimination that took place because the ICPC is thought of as a third party vendor at the college. 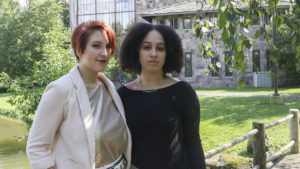 From left, seniors Annalise Haldeman and Vanessa Zimmerman said they felt ostracized from the ICPC when they came out as gay. Abbey London/The Ithacan

Currently, the three religious communities that are housed in Muller Chapel — Hillel at Ithaca College, the Catholic Community and the ICPC — all receive the same allotted funding so that they can host programming at the college. However, the college does not employ staff in any of these groups, and the budget for the groups was always intended for programmatic needs, despite the money being used in the past to fund the ICPC chaplain’s salary. Hierald Osorto, Director of Religious and Spiritual Life, is currently reworking this budget model to redistribute funding, which is planned to be revamped by the next academic year.

“Ms. Zimmerman, by her own admission in the first line of her eight page written narrative, and based on the entire content of that narrative is actually alleging discrimination by the protestant community at Ithaca College Inc., which is a separate not for profit religious organization,” the college’s rebuttal stated in a document obtained by The Ithacan.

However, during a previous meeting in February 2018 with administrators, while discussing the problems Zimmerman had faced in the ICPC, Rosanna Ferro, vice president for Student Affairs and Campus Life, said she felt the college was responsible for the religious community.

“The religious communities work with a lot of our students, and ultimately we’re responsible for that,” Ferro said in the meeting with Zimmerman, who provided audio of the discussion.

The college also stated in its rebuttal that it does not believe Zimmerman has a case because she was not removed from her position — she quit on her own — and because she has “insufficient” evidence proving she was harassed while working in the ICPC due to her sexual orientation.

Zimmerman said she feels she has a case based on “constructive termination,” a legal term that refers to a situation when an employee feels forced to resign from a position due to a hostile work environment. She also said that because the ICPC is funded by the college and resides on campus, it should be held accountable.

“It’s interesting that the college beforehand was like, ‘We are taking this really seriously; we understand that discrimination happened,’” Zimmerman said. “Now that we’re pushing them … into this method of being held accountable for the things they have allowed to happen on their campus through their financing to their students, … it’s very hypocritical.”

Dave Maley, director of public relations at the college, said in an email that the college does not comment on legal proceedings.

“It is important to note that the college takes all bias- and discrimination-related complaints seriously and investigates them thoroughly,” Maley wrote. “The goal of the college is to build and sustain a culture rooted in full participation, equity, and inclusion.”

Zimmerman and her girlfriend, senior Annalise Haldeman, created an organization called IC Color which aims to make the ICPC a more inclusive space for LGBTQ students and students of color. Zimmerman said that IC Color is planning to hold an event soon where students can share grievances they may have had with the college concerning discriminatory actions. Zimmerman said there is currently no time, date or location set for the event.