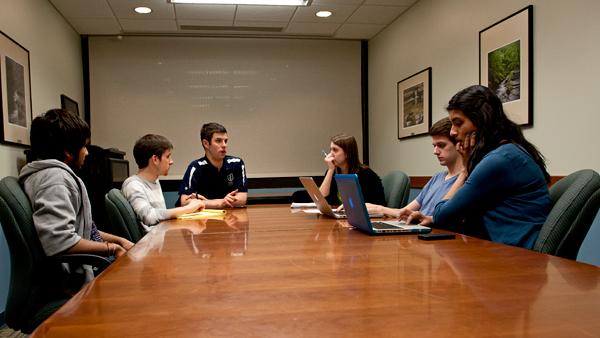 Rachel Orlow/The Ithacan
The Student Government Association executive board met April 2012 in the Student Activities Center to discuss the budget for this semester.
By Max Ocean — Contributing Writer
Published: September 5, 2012

With the 2012-13 school year in full swing, Student Government Association is gearing up for its fall elections.

The elections will open at noon Sept. 21 and go until noon Sept. 22. This year, there are four senate seats available for the incoming class, one seat for the class of 2014 and two for the class of 2013. There are also open positions for a graduate student liaison, a transfer student senator, a School of Health Sciences and Human Performance senator and an international student senator.

The position of international student senator was created in the spring after junior Courtney Brown, vice president of communications, and senior Rob Flaherty, SGA president, proposed a constitutional amendment to add the position, which the SGA senate passed unanimously.

To apply for candidacy, students are required to get 25 signatures from constituents, which must be submitted as part of an election packet by noon Sept. 14. On Sept. 17, the candidates will get an opportunity to present their platforms in IC Square.

Though SGA for the most part has no trouble filling its empty seats, junior Justin Pyron, vice president of senate affairs, said there hasn’t been full senior class representation in SGA since he joined his freshman year. Pyron said SGA is using social media such as Facebook, Twitter and IC Link, a social website for student organization involvement on campus, to encourage the student body to run as candidates and vote.

Brown said she has already talked to many students around campus about SGA and has found a lot of interest.

“The great thing about being a senator is that you’re so close to the students, you know what they want,” Brown said.

The voting process will take place through IC Link. Last spring’s elections were the first done through the site. They had the highest voter turnout ever recorded in SGA elections, with about 16.7 percent of the undergraduate student body voting. In past years, about 10 percent of the student body participated in the elections. This year, SGA is hoping to beat last year’s record number, Flaherty said.

Flaherty said SGA is determined to keep up with the new IC 20/20 core curriculum as it goes from a piece of paper to being implemented and will make sure that the student voice is injected in it.

Pyron said this transitional period for the college is an opportunity for SGA to become more involved in administrative decisions.

“It’s an excellent opportunity for us to get in there and make sure that we do what the students want us to do,” Pyron said.

To this year’s executive board this means making sure there are student voices in Ithaca College’s administration, Flaherty said.

“This is not your grandmother’s SGA — we’re not planning dances,” Flahery said. “We’re really making sure that the student experience at Ithaca College is the best that it can be.”

Students interested in becoming involved with the organization can attend SGA rush night at 7:15 p.m. Monday in the Taughannock Falls Room in Campus Center.