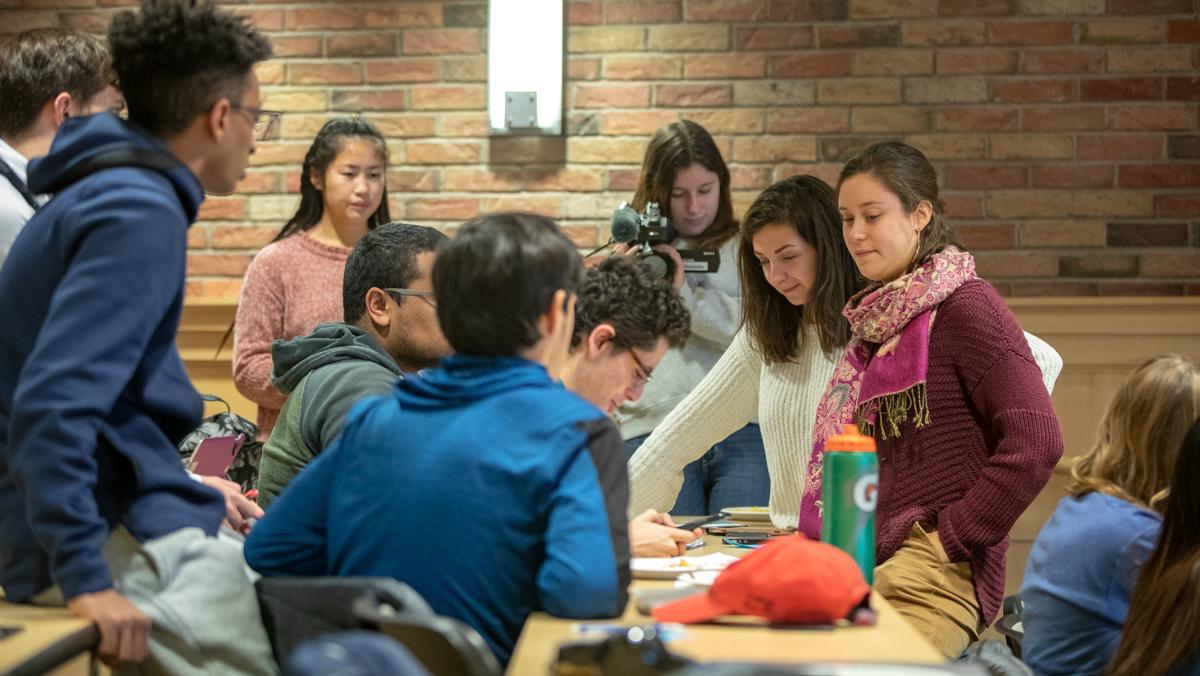 Elias Olsen/The Ithacan
The panel discussion was attended by approximately 30 students and hosted by junior Kelly Madden, a self-identified food-insecure student and member of the Poor People’s Campaign, and Lyndsey Lyman, community education coordinator for the Food Bank of the Southern Tier.
By Maia Noah — Contributing Writer
Published: November 14, 2018

A panel discussion on food insecurity and food injustice was held Nov. 13 at Ithaca College to emphasize the presence of this issue on campus and highlight ways students can help.

The panel discussion was attended by approximately 30 students and hosted by junior Kelly Madden, a self-identified food-insecure student and member of the Poor People’s Campaign, and Lyndsey Lyman, community education coordinator for the Food Bank of the Southern Tier. It was sponsored by the college’s Office of Student Affairs and Campus Life. This discussion was organized through a collaboration of Food for Thought, Ithaca College Environmentalists, Swipe Out Hunger, Challah for Hunger and Poor People’s Campaign and took place during the week of Nov. 12, which is Hunger and Homelessness Awareness Week.

Through the Poor People’s Campaign, Madden works to address the increasing issue of food injustice. Food injustice is a state in which access to sufficient means of food is limited by a lack of money and other resources. The organization works to unite people to fight and challenge issues that affect people nationally.

Madden said that being a food-insecure student at the college has created a constant concern for her. She said she has constantly had to weigh her options when picking between spending money on food or on other necessities.

“It’s something that’s always there, on top of dealing with academic stress, job stress, and friendship and relationship stress,” Madden said.

She shared her story to shed light on the extent to which food insecurity is present on the college’s campus. According to the 2016 Campus Climate Survey, 47 percent of the 3,000 student respondents reported struggling with financial hardship while attending college, and 36 percent of that 47 percent reported having difficulty affording food.

“It can be very distracting, constantly weighing those options, the cost-benefit analysis of, ‘Do I choose to eat, or do I choose to cover this bill?’” Lyman said. “So there’s all these decisions constantly being weighed, which the stress of that, I think is important to note, can take a major toll on the vibe and mind.”

The two panelists also provided attendees with strategies to address food insecurity in the community.

“I know that a lot of people, especially on the campuses in this town, come from affluent backgrounds where they’ve never had to think, ‘Oh, am I going to eat dinner tonight?’” Madden said. “And I think being mindful that that’s a problem and explaining that to some of your friends who might not be aware is where it starts.”

Madden also said that being proactive is necessary when trying to bring about change in the community. She recommended joining the many organizations on campus as an easy way to be proactive and combat food insecurity.

Madden also highlighted the importance of mindfulness when discussing food insecurity. Being open-minded and not making assumptions about someone’s life and upbringing is key in bringing about change, Madden said.

Junior Araxi Mehrotra, member of the Challah for Hunger executive board, agreed that being mindful is important when discussing this issue. She emphasized how important it is to get rid of the myths and misconceptions that surround food insecurity.

“We need to abolish the stigma,” Mehrotra said. “It’s a really hard thing to ask for help when you’re in this situation, and it really shouldn’t be.”

Senior Jenna Mortenson, SGC vice president of campus affairs, said that becoming aware and maintaining a nonjudgemental mindset toward food insecurity for those who struggle with it is crucial to creating positive change.

“A really important takeaway is that this issue can seem that it’s kind of far away from our campus, but it’s important to realize that even inside this bubble, food insecurity is a very real issue, and it’s something that needs to be addressed,” Mortenson said.

Freshman Jason Starkman said he was surprised by the number of students on the college’s campus that suffer from food insecurity. The panel discussion shed light on the fact that food insecurity is present in all areas of the country.

“I learned that the issues of food insecurity span not only poorer areas but reaches everywhere and can impact anyone,” Starkman said. “It was pretty eye–opening.”