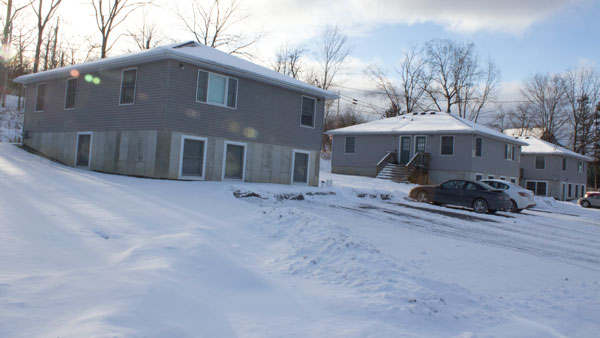 Sabrina Knight/The Ithacan
Several students living in homes on Pennsylvania Avenue reported that they were burgled over winter break. Televisions, other electronics and alcohol were among items stolen from houses.
By Jack Curran — Online News Editor
Published: January 22, 2014

Because of their proximity to campus, the houses on Pennsylvania Avenue are mostly occupied by students from the college. These houses are usually left unoccupied during winter break when students go elsewhere during their time off.

Senior Victoria Sturniolo said more than $4,000 worth of her valuables were stolen from her home while she and her roommates were away for winter break.

In addition to the valuables stolen from Sturniolo’s house, all of the alcohol in the house was missing when the residents returned. Sturniolo said she thinks the burglars drank the missing alcohol in the house, because one roommate later found vomit on the rug in her room.

“We’re assuming they partied in our house,” she said. “They actually left the carpet behind, but they took all the bottles.”

Sturniolo said she filed a report with the New York State Police, who were able to take a DNA sample from the vomit. The State Police are unable to comment at this time about the status of the investigation.

Another student, who asked to remain anonymous, living on Pennsylvania Avenue said he also had items stolen over winter break. He said he thinks the old age of the houses likely makes them a target because they’re easy to break into.

“They must have hit a bunch of houses, and just gone down the line, because these houses were built by like, George Washington,” he said. “The hinges are all old, and the doors rattle, so they’re not state-of-the-art security.”

The resident also said he and his housemates have spoken to their landlord, Orlando Iacovelli, about their security concerns. He said they have demanded that their landlord replace their locks.

“We told [the landlord] that we’re not going to pay rent until he changes the locks on the house,” he said. “We all locked the doors when we left, and when we got back, they had gotten in with no forced entry signs.”

Iacovelli notified several of his residents who had been stolen from over break. However, Sturniolo, whose house is also owned by Iacovelli, said none of her housemates were given any notice.

“We heard about a few of the break-ins over break, and supposedly our landlord was supposed to be checking in on our house to let us know if something happened, but we never received a call,” she said.

Many of the students affected by the burglaries are concerned with what may happen during future breaks.

“Now we’re thinking about how we’re going to prevent this when we go on spring break,” the anonymous student said.