Ithaca College has identified a current student as responsible for posting two threatening messages directed at the POC at IC protesters on Yik Yak on Nov. 11 and 12 leading up to the Nov. 14 Cortaca football game, according to an announcement released Nov. 20.

The student was found following an investigation by the Office of Public Safety and Emergency Management and has been judicially referred for harassment and cyberbullying under the Student Conduct Code, according to the announcement. Due to federal privacy laws, neither the name of the student nor the outcome of the judicial process can be made public. 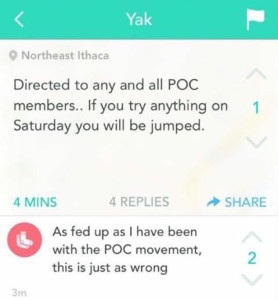 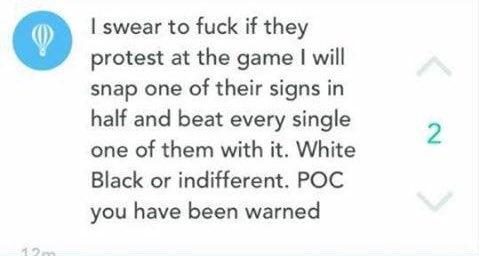 “Ithaca College is committed to maintaining an environment where it is safe for everyone to learn, work, and live,” stated the announcement, posted by Dave Maley, senior associate director of media relations. “Any threats to our community or members of our community, including those made on social media, will be investigated and addressed.”

The college is not alone — earlier in November two college students were arrested for posting death threats on Yik Yak targeting students of color at the University of Missouri. Many students did not come to school after a message was posted that said, “I’m going to stand my ground tomorrow and shoot every black person I see,” according to the New York Daily News.

A student was arrested at Western Washington University Nov. 30 for issuing threats on Yik Yak that prompted the university to close Nov. 24, according to The Chronicle of Higher Education.

In a recent post on its blog, Yik Yak made it clear that threats would not be tolerated and that the company would work with law enforcement to find people who post threats. The post came in light of threats made on the anonymous social media platform toward campus protesters around the country.

“Let’s not waste any words here: This sort of misbehavior is NOT what Yik Yak is to be used for. Period,” the post said. “Please remember that Yik Yak and law enforcement take threats seriously. Yik Yak works alongside local authorities to help in investigations, and we may share information with law enforcement as set forth in our Privacy Policy and legal page.”

Michael Leary, assistant director of the Office of Judicial Affairs, said although the student’s case is still in the process, if found responsible for the charges he or she would face a punishment ranging anywhere from a warning to expulsion.

“I think the incident was taken very seriously and had a big impact on the college,” Leary said. “I can’t really share what we will do with the sanction, but it has to be something within that range.”

Although the University of Missouri and Western Washington University released the identities of the students who were arrested, Leary said the college will be keeping the student’s identity anonymous to adhere with federal laws and because the case is a violation of the Student Conduct Code and is not considered criminal at this time.

The college’s announcement said anyone who is being threatened or who sees a threat made to someone else should immediately call Public Safety at 607-274-3333.